[send private message]
This page has been accessed 2,471 times.

This profile is part of the Dickey County, North Dakota One Place Study.

1803-1818: The United States acquired the southwestern half of North Dakota as part of the Louisiana Purchase from France. The northeastern half was acquired in 1818 by treaty with Britain.
1804-1806: The Lewis and Clark Expedition explored the area of present-day North Dakota.
1812: The first permanent white settlement in present-day North Dakota was made at Pembina by Scottish pioneers from Canada.
1823: Arikara (Riccaree) Indian ceded land
1851: Santee Sioux ceded land
1855: Teton Sioux ceded land
1861-1868: The Dakota Territory was organized. Its boundaries were reduced to include the area of the two Dakotas of today when the Montana Territory was created in 1864 and the Wyoming Territory in 1868.
1863: Free land was offered under the first Homestead Act, but the Civil War and Indian Wars delayed settlement.
1866: (December 21,) Fetterman massacre, Capt. William J. Fetterman of the U.S. army, often boasted he could whip the whole Sioux Indian nation with eigthy men, led that exact number into an ambush by Sioux Indians along the Bozeman Trail.
1868: Fort Laramie Treaty
1871: White settlement began in earnest in northern Dakota when railroads reached the Red River from St. Paul and Duluth, Minnesota.
1876: Cheyenne and Sioux Wars
1878-1879: Cheyenne ceded land
1878-1886: The eastern region was settled in the first Dakota boom era.
1889: The Dakota Territory was divided, and both North and South Dakota were admitted to the Union.
1898-1915: Additional lands were settled in a second Dakota boom. The peak year for new homesteads was 1906.
1890: (December 29,) About three hundred Sioux Indians, mostly women and children under Chief Big Foot, were massacred at Wounded Knee Creek, South Dakota, by the U.S. Seventh Cavalry.

On March 7th, 1881, the county of Dickey was created by act of the territorial legislature. The boundaries given the county in 1881 have remained unchanged, and Dickey is one of the very few counties that have not changed boundaries at some time in their history.

The naming of Dickey county is a historical matter that is not clear. There are those who claim it was named for Alfred Dickey, a prominent resident of Jamestown and the first Lieutenant Governor of North Dakota. He was a man well worthy of having a county named for him, but there is also a persistent belief that the county was named for a Mr. Dickey who was connected with the engineering staff of the Milwaukee Railroad.

With settlers coming in the early part of 1882 there was need of county organization, not so much for the purpose of keeping order and for the restraint of the lawless as to accommodate the people who were establishing homesteads and for the conduct of the business that was naturally arising. For the purpose of organizing the county, Governor Ordway came to Ellendale on July 1st, 1882 and appointed Q. C. Olin, A. H. Whitney and H. E. Geschke as County Commissioners. This board held their first meeting on August 18th, 1882, and appointed the following officers for the new county; M. N. Chamberlain, County Clerk and Register of Deeds; George Kreis, Treasurer; W. H. Becker, County Attorney; H. J. Van Meter, Sheriff; J. L. Stephenson, County Assessor; Miss E. F. Arnold, Superintendent of Schools; J. E. Brown, Surveyor; Dr. W. F. Duncan, Coroner; J. A. Scott and W. A. Caldwell, Justices of the Peace. 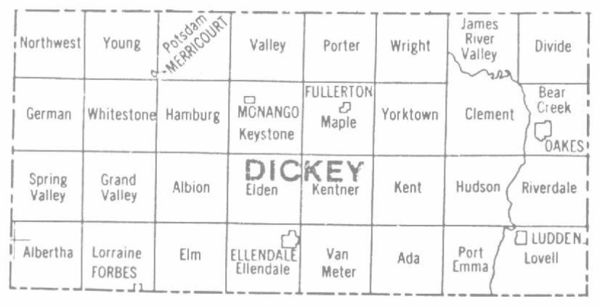 Ellendale - The oldest town in the county. It was surveyed and platted on May 8, 1882 and voted the county seat over Keystone on Nov. 6, 1882. It was incorporated as a village in 1883 and as a city on Aug. 25, 1889. Ellendale was named by railroad town site officials for Mary Ellen Dale Merrill who was the wife of S. S. Merrill, the superintendent and general manager of the Chicago, Milwaukee & St. Paul Railroad. Since Ellendale was the first town on a railroad in this entire region, it became known as a great distributing point for settler's supplies.

Forbes - formed in November 1905 as the terminus of the Great Northern railroad, it is the youngest town in the county. It once had a bank, newspaper and creamery, as well as other businesses.

Fullerton - Located on the Soo line, this town was established in October 1888 and once had a bank, hardware and furniture store, general store, two elevators, lumber yard, barber shop, billiard hall and meat market. Now it has a population of about 65 people and is known primarily for The Carroll House.

Glover - is a little burg established in 1887 and named for the prosperous farmland owned by Glover & Son. Fred Glover managed the farm for his father, Samuel Glover, who lived in Minneapolis. At one time, Glover had a general store, lumber yard, machinery and implement store and two elevators.

Guelph - was established in 1887 and was known as Centralia, Centropolis, Coldwater, Menasha Center and Thatcherville before Guelph was finally settled on, named after the hometown of the postmaster, Silas R. Dales who had emigrated from Guelph, Ontario, Canada.

Ludden - was first established in 1883, being the "old town" and re-established as the "new town" in 1886. It once had a bank, newspaper and other thriving businesses along the North-Western railroad, but most of the buildings were moved away. For more information, see A History of Ludden and Vicinity, written by Mrs. R. M. Folsom, pub. 1894.

Monango - was started in 1886 when the Milwaukee railroad was extended north. The town also stood within a mile of the Soo line running west and had connection by stage with Kilbernie, a town on the Soo, two miles west.

Oakes - was named for Thomas F. Oakes who was the president of the Northern Pacific Railroad from 1888-1893. The town was platted in 1886 and incorporated in 1888. Oakes was an important stagecoach and railroad station and still sustains strong railroad ties due to the continued development of its agricultural services through the addition of two 100-car loading grain elevators in 2004. The railroads include the Red River Valley & Western (BNSF) and Dakota Missouri Valley & Western (CP). 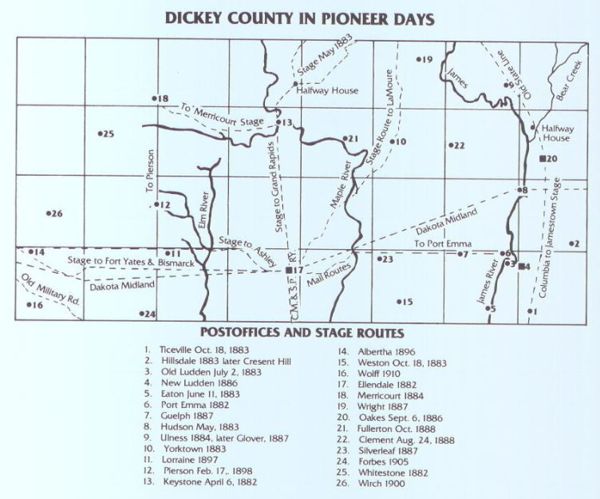 For a list of place names no longer found on a map, see Dickey County Localities

For a list of Dickey County Cemeteries, see the Categories page.

From the Library of Alison Andrus who will do lookups when she isn't moving and can find the box they are packed in. 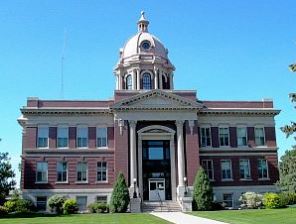 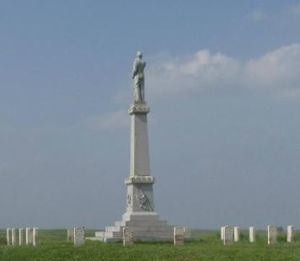 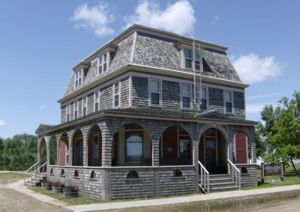 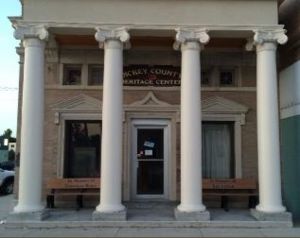 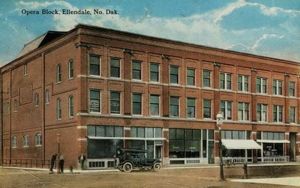