[send private message]
This page has been accessed 512 times.

The date is either 1955 and/or 1960. The book itself includes no date of printing. Online references to the work consist only of ephemeral advertisements from antiquarian bookshops and private sellers. In these advertisements copies are referred to as either 1955 or 1960. All claim to have 138 pgs, and there is no other information given to suggest any difference between the works from the two publication dates, or any clue as to how one might distinguish one from the other.

The copy I possess includes at the back several pages of newspaper reviews of the book from newspapers in the Minden-Lübbecke region, dated from 1955 and 1956. These reviews have been collected, assembled, professionally printed, and then inserted at the end of the book.

That they are added to an already printed work is clear only in that the sheets are not bound with the rest of the work, but pasted to the back cover on a slightly smaller sheet of publication grade gloss paper so that it fits properly despite not being part of the original sheaf.

To be relatively free of trouble under the racial laws of Nazis Germany it was necessary to demonstrate that one had no Jewish parents or grandparents. Thus a family with living grandparents would need to document thier non-Jewishness covering a minimum of 5 generations, from children to great-great-grandparents.

Obviously with the name Goldstein, the Goldsteins were extremely suspect of being Jewish, or at the very least Mischling. As such the family history was extensively researched and documented in the 1930s so that everyone could receive their Ahnenpass and avoid the consequences of being Jewish or Mischling in Nazis Germany.

Once some semblance of normality returned several years after the war Heinrich Goldstein gathered together the surviving information in the late 40s and early 1950s. He supplemented it with further research and interviews with living relatives to replace what had been lost to bombings and the like. This is the basis for the genealogies in this book.

As can be seen from Image 4 the book does not source individual records. In fact it has no Bibliography and such references to sources as there are are often incomplete and not of academic standard.

The first test of the accuracy of the information was the Nazis bureaucracy. Families suspected of being Jewish would have their Ahnenpass information verified to be sure that they were not Jews trying to pass as Aryans. This information would be checked again whenever anyone attempted to get or hold a civil service job, enter or stay in a profession such as law, medicine, etc, attend a University, and so on.

Of course in the 1930s there would have been some motivation to falsify any records that suggested being even partly Jewsih, despite the risk of being discovered and punished as a result. However, in the beginning the consequences of falsifying the information for ones Ahnenpass were more severe than the consequences of being Jewish, so the motivation was not as strong as it might seem in hindsight.

Further, after the war there was no longer any such reason to falsify records in this way, so that concern does not apply to the post-war record. As it happens there does not seem to have been any such falsifications, either discovered by the Nazis or revealed after the war.

This second test was repeated in that once published, copies of Die Goldsteiner - Von der engeren Heimat in die weite Welt were distributed to many of the living Goldsteins who were described or mentioned in the book, including the adult members of my mothers family. Had there been errors or false records this would have become part of family lore. Certainly my mother, and I assume others, made hand written notes in the book to keep it up to date (deaths, marriages, etc).

The third test is that in posting the information here I have attempted to verify every record. For the information from towns and parishes that were not heavily bombed a great deal of it still exists and is even available online, principally through the Historical Record Collections at Family Search, but others as well.

Not all of the information in Die Goldsteiner - Von der engeren Heimat in die weite Welt can be verified any more, but a great deal of it was (perhaps 80%). Out of approx 200 profiles involving hundreds of different facts I found no outright errors, and only a few cases where a "fact" is open to interpretation. The latter have all been noted on the appropriate records.

As such it would seem that despite the lack of appropriate sourcing to original documentation, Die Goldsteiner - Von der engeren Heimat in die weite Welt is in fact an extremely reliable source of genealogical information for people and period it describes. 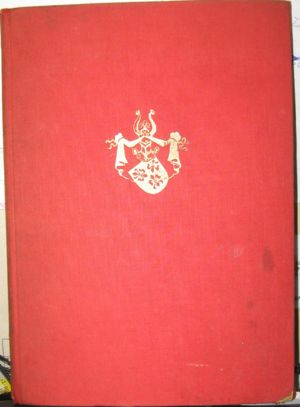 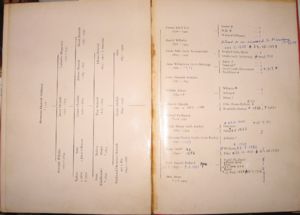 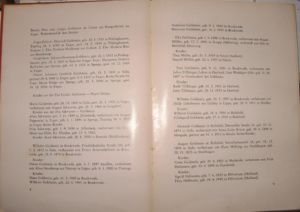 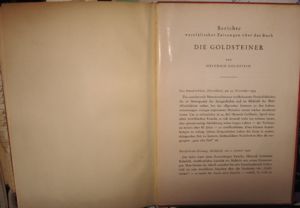