[send private message]
This page has been accessed 10,313 times. 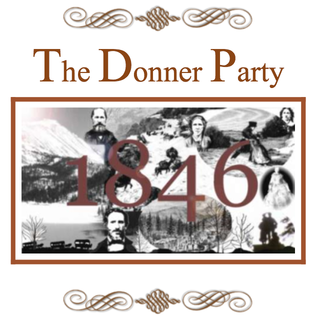 The Donner Party were 81 American Pioneers.They set out for California in a wagon train and became snowbound in the Sierra Nevada in 1846. Some of these immigrants resorted to cannibalism to survive.

The Donner family suffered more than most families. The broken axle on George Donner's wagon caused the Donners to stop at Alder Creek, eight miles from the cabins at the Lake. Caught by the sudden storm the first week of November, and hampered by a shortage of large trees and strong men to cut them, The Donners did not construct cabins. Instead, they built crude "brush sheds" covered by their wagon canvas.

Tamsen Donner age 44, died at the cabin of Lewis Keseberg after George died

Children of Jacob and Elizabeth Donner

James F. Reed, a 45-year-old native of Northern Ireland, had settled in Illinois in 1831. He was accompanied by his wife Margret, 32; step-daughter Virginia, 13; daughter Martha Jane "Patty," 8; sons James and Thomas, aged 5 and 3; and Sarah Keyes, Margret Reed's 70-year-old mother, who was in the advanced stages of consumption.In addition to leaving financial worries behind, Reed hoped that California's climate would help Margret, who had long suffered from ill health.The Reeds hired three men to drive the ox teams: Milford (Milt) Elliot, 28; James Smith, 25; and Walter Herron, 25. Baylis Williams, 24, went along as handyman and his sister Eliza, 25, as the family's cook.

All members of the Reed family survived.

Children of James and Margaret Reed

Children of Franklin and Elizabeth Graves

William Eddy was the only member of his family to survive . In mid-December 1846, William Eddy set off to seek help, leaving his wife and two small children behind three months later when he returned with a relief party, his wife Eleanor and children James and Margaret were dead.

The Murphy Family were a large family, but very little is known about them. They were not as well off as the Donners and Reed Family and very little records of them remain,the Murphy cabin site was excavated archaeologically in the 1980s by Donald L. Hardesty ,it was in this cabin that the Murphy family and the Eddy family spent the winter of 1846-1847.

Patrick Breen was born in County Carlow, Ireland in 1795, He emigrated to Canada in 1828 an there he married Margaret Bulger.The Breens had two sons in Canada, then moved to Springfield, Illinois, about 1834, where they resided briefly before moving on Keokuk in Lee County, Iowa. In 1835 a son James was born, who died and six more children were later born in Iowa. Patrick worked on riverboats, but primarily was a farmer and acquired a half-section of land about three miles northwest of Keokuk.

Religous intolerance was most likely a factor in his decision to relocate to California, that and the promise of free land. Patrick sold their property in Iowa and outfitted the family for the journey, and set out in three wagons to rendezvous with other emigrants in the spring of 1846. They were accompanied by their friend and neighbor, Patrick Dolan. Like most of the other eventual members of the Donner Party, they started out in the company captained by William H. Russell.

Children of Patrick and Margaret Breen.

William McCutchen is described as "a great stalwart Kentuckian, full six feet six inches in height" he was born in Davidson County, Tennessee in about 1816. The McCluchen's were members of another party of immigrants but fortunes made them join the Donner Party at Fort Bridger The Party realized that they did not have enough to see them through to California and "Big Bill" McCutchen and Charles Stanton volunteered to go ahead to Sutters Fort . Big Bill became ill after arriving at Sutter’s Fort, and Stanton returned with supplies alone of the group, Big Bill later tride to reach his family but was prevented by weather and it wasnt until February in the second relief that he reached camp, his wife had already reached safety with the Forlone Hope but his dauaghter Harriet was dead.

Child of William and Amanda McCutchen.

Mr. and Mrs. Wolfinger were among several German speaking emigrants in the Donner Party,they tended to keep to them self so not much is known about them. There are no known descendants Dorothea Wolfinger of the Donner Party. Her son Albert died unmarried, as far as is known. Her daughter Rosa married Conrad Schuler in 1875 and in turn had a daughter, Rosa Schuler, who died unmarried in Mendocino County, California, in 1945.[1]

Children of Lewis and Philipinne Keseberg.

Teamsters for the Donner Family

John Denton age 28, died March 1847 in Yuba Pass, 1st Rescue
Noah James age 16, survived 1st Rescue *
Samuel Shoemaker age 25, died December 20, 1846 at Alder Creek.
Augustus Spitzer age 30, died February 8, 1847 Donner Lake camp.
Charles Burger age 30, died December 29, 1846 Donner Lake camp was one of the "Forlorn Hope" but had to turn back as he had no snow shoes.
Hiram Miller age 29, survived Miller left the Donner Party on July 2 to join eight other single men who set out with pack mules. This was the Bryant-Russell Party, it was the first group to take Hastings Cutoff.Hiram Miller later helped rescue the trapped emigrants as a member of the Second and Third Reliefs.
Jean Baptiste Trudeau age 16, survived 3rd Rescue * hired by the Donner Family en route.
Antonio age 23, died December 1846 "Camp of Death." member of the "Forlorn Hope" he had been hired by the Donner Family to herd the loose cattle.
Charles Stanton age 35, died 23 December 1847 when he attempted to lead a party over the mountains on snowshoe,Charles Stanton was a bachelor travelling with the Donner Family.
Luke Halloran age 25, died August 25, 1846 Great Salt Lake he was travelling with the Donner Family as he was to ill to ride on horse back.

Teamster for the Graves Family

John Snyder age 25, died October 5, 1846 as the party was travelling along the Humboldt River James Reed’s teamster Milt Elliott and John Snyder became involved in a dispute,James Reed intervened and John Snyder was stabbed in the chest and died.

Teamster for the Reed Family

Teamsters for the Breen Family

Patrick Dolan age 35, 26 December 1846 at "Camp of Death."A bachelor farmer and friend of the Breen family.

Teamsters for the Keseberg Family

An associate of Mr. Wolfinger

Who can wonder at my indignation and grief in little girlhood, when I was told of acts of brutality, inhumanity, and cannibalism, attributed to those starved parents, who in life had shared their last morsels of food with helpless companions? read more

The members of the Donner party then held a council to decide upon the fate of my father, while we anxiously awaited the verdict. They refused to accept the plea of self-defense and decided that my father should be banished from the company and sent into the wilderness alone. It was a cruel sentence. And all this animosity towards my father was caused by Louis Keseburg, a German who had joined our company away back on the plains. Keseburg was married to a young and pretty German girl, and used to abuse her, and was in the habit of beating her till she was black and blue. This aroused all the manhood in my father and he took Keseburg to task...The feeling against my father at one time was so strong that lynching was proposed. He was no coward and he bared his neck, saying, "Come on, gentlemen," but no one moved. It was thought more humane, perhaps, to send him into the wilderness to die of slow starvation or be murdered by the Indians; but my father did not die. God took care of him and his family, and at Donner Lake we seemed especially favored by the Almighty as not one of our family perished, and we were the only family no one member of which was forced to eat of human flesh to keep body and soul together. When the sentence of banishment was communicated to my father, he refused to go, feeling that he was justified before God and man, as he had only acted in self-defense.

“came to this place on the 31st of last month that it snowed we went on to the pass the snow so deep we were unable to find the road, when within 3 miles of the summit then turned back to this shanty on the Lake, Stanton came one day after we arriveed here we again took our teams & waggons & made another unsuccessful attempt to cross in company with Stanton we returned to the shanty it contiuneing to snow all the time we were here we now have killed most part of our cattle having to stay here untill next spring & live on poor beef without bread or salt.

"Mrs Murphy said here yesterday that thought she would Commence on Milt. & eat him. I dont that she has done so yet, it is distressing." 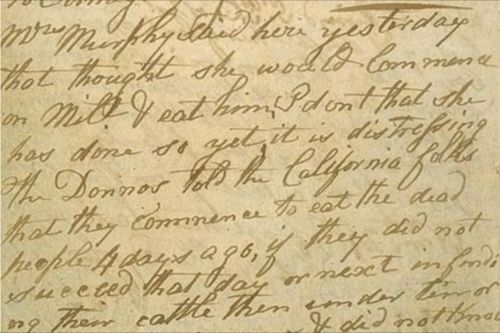 At the mouth of the tent stood a large iron kettle, filled with human flesh, cut up. It was from the body of George Donner. The head had been split open, and the brains extracted therefrom, and, to the appearance, he had not been long dead—not over three or four days, at the most. Near by the kettle stood a chair, and thereupon three legs of a bullock that had been shot down in the early part of the winter, and snowed upon before it could be dressed. The meat was found sound and good, and, with the exception of a small piece out of the shoulder, wholly untouched.

Mrs. Donner, he (Keseberg) said, had, in attempting to cross from one cabin to another, missed the trail, and slept out one night; that she came to his camp the next night, very much fatigued; he made her a cup of coffee, placed her in bed, and rolled her well in the blankets; but the next morning found her dead. He ate her body, and found her flesh the best he had ever tasted. He further stated, that he obtained from her body at least four pounds of fat. No traces of her person could be found, nor the body of Mrs. Murphy either. When the last company left camp, three weeks previous, Mrs. Donner was in perfect health, though unwilling to come and leave her husband there, and offered $500 to any person or persons who would come out and bring them in—saying this in the presence of Kiesburg. 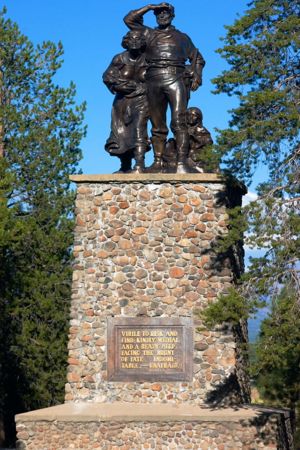 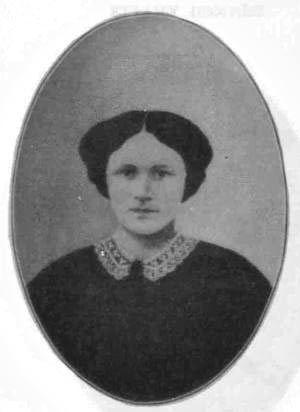 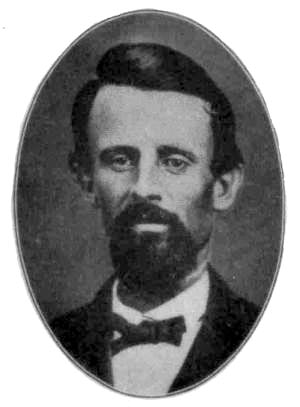 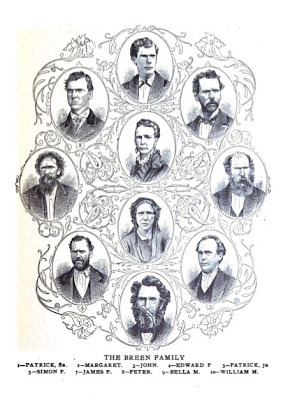 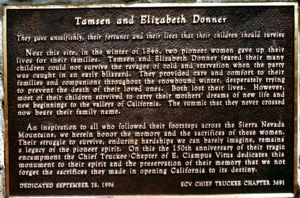 Lance Martin
I have uploaded a memorial photo from Alder Creek. There are some names listed that do not have profiles. I am going one by one to see if I can find the discrepancies. [Alder Creek Memorial]
posted Nov 23, 2017 by Lance Martin

S (Hill) Willson
Thank you so much for the tremendous work on this page.

Is there a page that provides information on the people who helped with the rescue attempts/successes?