[send private message]
This page has been accessed 289 times.

"Founded over 600 years ago, the Drapers’ Company is incorporated by Royal Charter and is one of the Twelve Great Livery Companies in the City of London. It has evolved into an organisation that addresses contemporary issues, gaining a new relevance through its philanthropic role." Read more at:

The image to the right is a scan of a document passed on to Chris Orme from Dorothy Orme (formally Watson) detailing the history of the Watson family connection with The Drapers' Company as recorded by her father.

It will be seen that the document sites Henry as being the person through whom the connection began. Henry was an apprentice to a Robert Lake Young. I have found one Robert Lake Young in the 1851 census, b. abt 1784 in Surrey, living in Surrey and working as a "Clarke in the the Glass Trade". This is interesting as Henry's father was a glass and lead merchant. 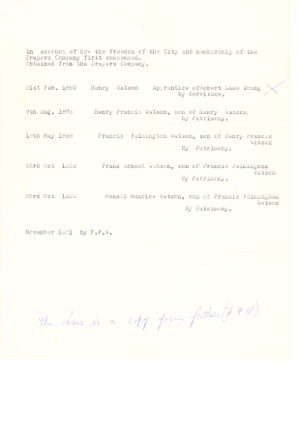