[send private message]
This page has been accessed 627 times.

The cemetery surrounding the Drumbo Parish Church (Church of Ireland), Holy Trinity, is located in Ballylesson, in the Diocese of Down and Dromore. See the Wikipedia article on Ballylesson, https://en.wikipedia.org/wiki/Ballylesson - this outlines that the Church was built in 1788 and consecrated in 1789. It replaced an earlier building that had fallen into disrepair and was derelict. The Round Tower beside the Presbyterian Church in the village of Drumbo marks the site of the early Celtic monastery, which, after the Reformation in the 16th century, became the site of the parish church until the late 18th century. (see the Free-space page for Drumbo Presbyterian Church)

The new site was chosen by Lord Hillsborough, shortly to become the Marquis of Downshire. The local population had by then moved downhill to the Lagan valley and the churchwardens decided to build the new church in the townland of Ballylesson on a prominent site belonging to one of the churchwardens, James Beers. The church was extended in 1863/4 by adding transfits and a chancel. The old site at Drumbo village was taken over by the Presbyterian Church, who built a new church there in 1882.

Holy Trinity is a listed building, and was designed by Charles Lilly. It has a square tower at the west end with pinnacles at the corners of the tower. The tower also contains a set of eight change-ringing bells, the heavier five of which date to 1791, and were cast by the famous Rudhall foundry, in Gloucester. The only original part of the church is the porch and tower, which houses the bells. Restoration work took place on the building in 2005 and took place on the tower in 2015. Read more of the history of the church on Lisburn Churches - Holy Trinity August 2005.

Many of the graves are over 200 years ago, however there appears to be no information on when the first burials took place and who they were (at least, no information available online).

The church is situated on the Ballylesson Road and can be approached from Shaw’s Bridge, taking a right turn past the bridge, or by passing Belvior Park Hospital, first right past the hospital towards Lisburn. From Lisburn on the Hillhall Road, first left past Drumbeg cross roads.

A prominent memorial on the south side of the nave commemorates the loss of Reverend Mitchell's son Walter Dawson Mitchell, who was killed when the Lusitania was torpedoed in 1915.

Michael Thomas Sadler, who died in 1835 and, although he worshipped in Christ Church, is buried in Drumbo, in a grave surrounded by iron railings on the right hand side of the path leaving the church. Sadler came to live in Belfast from Nottinghamshire, where he was M.P. for Newark at Westminster and was prominent in the social reforms associated with the early industrial revolution. There is also a memorial tablet to Michael Thomas Sadler at Holy Trinity.

The aim of the Global Cemeteries project is to ensure there are Free-space pages for cemeteries, and that profiles of those interred are created and linked to both the cemetery and the wider family tree.

This cemetery at Ballylesson has several hundred graves. The capturing of the interments for WikiTree is only in the early phase. BillionGraves has 240 entries, while Find-a-Grave has 125.

It is intended that a table of interments (with progress indicated for photo and transcription) will be linked to this page for reference and progress tracking. 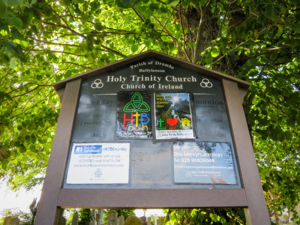 Driveway up to Holy Trinity Ballylesson past the graves 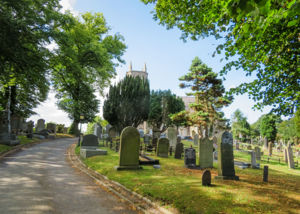 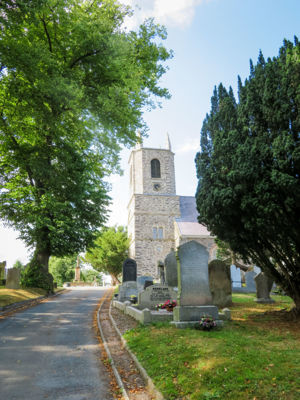 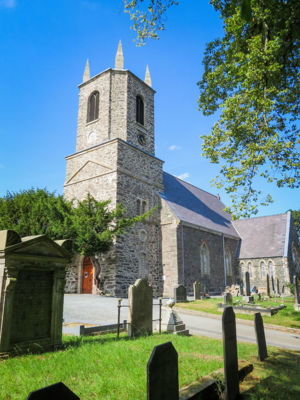 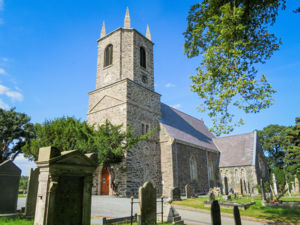