[send private message]
This page has been accessed 74 times.

"Surrounded by unparalleled views of the Los Angeles skyline" Forest Lawn Memorial Park has been a Los Angeles Landmark since 1906 and has been used by many film stars and other celebrities since then. Shaded by oaks and pines and landscaped with life-sized sculptures, fountains and fragrant flowers, the lush green grounds offer a beautiful, if incongruous, setting for a marriage ceremony.

Forest Lawn's 300 acres of intensely landscaped grounds and thematic sculptures were an inspiration for many...Since 1929, with its "Disneyland-type theme park", over 35,000 couples have been married at Forest Lawn Memorial Park in Glendale, California. Ronald Reagan and Jane Wyman, were married there on January 26, 1940 just five months prior to the Early-Wilson Wedding Ceremony. Forest Lawn has three non-denominational chapels: "The Little Church of the Flowers", "The Wee Kirk o’ the Heather" and "The Church of the Recessional", which are all exact replicas of famous European churches.

The Groom, Erroll Houston Early (25), of Kansas City, Missouri and residing in Los Angeles, CA and The Bride, Blanche Irene Wilson (21) , of Pollock, South Dakota and residing in Burbank, CA, were married in The Little Church of the Flowers chapel, in Glendale, Los Angeles County on July 3, 1939, California.

The Little Church of the Flowers is an exact replica of Stokes Poges Church (six centuries old) in England. This was the scene of Thomas Grey's immortal Elegy in a Country Churchyard and is his burial place. This famous church in Glendale was dedicated in 1923 and is the scene of many weddings, including those of movie stars and celebrities.

The Wedding ceremony was performed by Baptist Minister, Martin Luther Long, and witnessed by Daryl Roquepod, a resident of Burbank, CA and Virginia Marvin, a resident of Los Angeles, CA.

The Early-Wilson Wedding Ceremony was also attended by both of Erroll Early's parents, Cola Marmaduke Early and Bonnie Louise Winn Early. Anita Rouse was their flower girl. According to Irene's daughter, her mother had later informed her that no relatives or friends of Irene Wilson's had been present.

Please comment if you were in attendance or know of someone that was. We would like to hear any details or stories that you can share. Thank you. 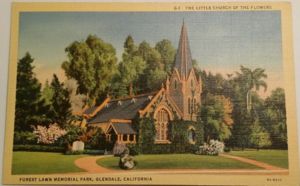