Surnames/tags: Johnston Holmes Gabriel
No Profile Manager [adopt this profile]
This page has been accessed 906 times.

William Johnston, one of the early settlers of Wilton, Iowa, was born in New York City, Dec. 20, 1817. His father, Rev. William Johnston, was born in the city of Sligo, Ireland, in 1791. He received a liberal education, and is said to have mastered seven languages. He adopted the ministry as a profession, becoming a noted clergyman of the Methodist Episcopal Church. For a long time he was in the employ of the British Government, and in 1815 came to New York City in that service, being accompanied by his wife and youngest child. He did not then intend to become a resident of the New World, but the vessel on which they embarked encountered some very severe storms, and was in great danger of destruction, which so affected Mrs. Johnston that she would never again consent to cross the ocean, hence the father decided to make his future home in America. Two children had remained in England, a son and daughter; the latter died in that country in girlhood, while the former became a resident of America after reaching manhood. For several years Rev. Johnston devoted his attention to preaching and teaching in New York City. There he met Prof. Ray, who has gained celebrity by his series of school books, and with whom he had attended school in early life. The Professor was somewhat influential in inducing Mr. Johnston to engage in the profession of teaching, for which his attainments so well qualified him. During the next few years he was located at various places, where, as in New York, he engaged both in teaching and preaching. First he was at Wellsburg, W. Va., from thence to Jefferson County, Ohio, then to Morgan County, Ohio, later to Athens County, from thence to Meigs County, the same State, where his wife died. He next received a call from the church in Cincinnati, where he remained three years, going from thence to Ft. Recovery, Ohio, where he again married, and then came to Iowa, in 1856, purchasing a farm in Cedar Township, on which he resided until his death in 1863, in the seventy-second year of his age. He possessed a superior education, was a man of more than ordinary ability, and was closely wedded to the church of his choice. By his first marriage nine children were born, two of whom died in childhood; Fannie died in England, and Zachariah died after the family came to America. One of the deceased sons, Hezekiah, was a soldier in the war with Mexico, and died in the service. Only four children are now living: William, Mary, Noah, and Elizabeth. There were five children born of the second marriage. William Johnston, the subject of this sketch, served an apprenticeship to the blacksmith's trade for four years, after which he followed that occupation for a quarter of a century. On the 6th day of May, 1855, he landed at Muscatine from the steamer “Golden Sheaf,” being accompanied by his family, which consisted of his wife and five children, and by I. N. Gabriel and his family. Together they had journeyed from their old home in Athens County to seek home in the comparatively new State of Iowa. Leaving their families near Mt. Vernon, the two men, with a team, traveled over much of the State, seeking a desirable location, and finally decided to locate in Cedar County. Purchasing lands on section 31, Inland Township, they made homes for their families, and Mr. Gabriel resided on that farm until his death, which occurred a number of years ago. Developing a farm from the land which he first purchased, Mr. Johnston there resided until 1879, when he retired from the active duties of farm life and removed to Wilton, where he still makes his home. In Ohio, Mr. Johnston married Miss Louisa Holmes, and to this worthy couple have been born nine children, three sons and six daughters. Two of his sons fought in defense of the old flag during …

p. 482 … the War of the Rebellion, Albert J. being a member of the 2d Iowa Cavalry, and Sylvanus of the 24th Iowa Infantry. They are both now residents of Ida Grove, Iowa. The eldest child died in infancy; Edwin is also a resident of Ida Grove, Ida Co., Iowa; Hadasah is now Mrs. H. C. Perry, and resides in Wilton; Arminta wedded Mr. Amos Ford, and is a resident of Grinnell; Olivia, a teacher, Emma, and Hattie are all at home. Mr. Johnston came to Iowa in the prime of his life, and has seen the country developed from an almost unbroken wilderness to its present advanced condition of prosperity. A poor man when he began the improvement of his prairie farm in Cedar County, he has by industry and perseverance secured a competency, and he and his faithful wife, in the pleasant home in Wilton, surrounded by all the comforts of life, are enjoying the fruits of his former labors. In politics Mr. Johnston is a Republican, and in slavery days was an Abolitionist. He is one of the prominent citizens of Wilton, and has ever had the respect and esteem of all with whom he has come in contact. 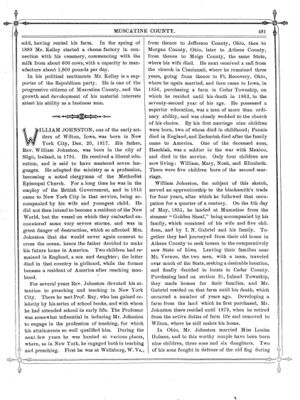 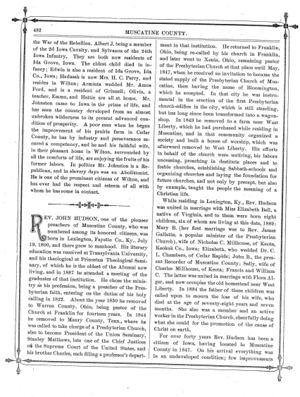