[send private message]
This page has been accessed 19 times.

After many decades of conflict, the British captured mainland Nova Scotia from the French for the final time in 1710. British control was confirmed by the treaty of 1713. By that treaty, France also lost its important cod fishery in Newfoundland, while retaining what they called Île-Royale (Cape Breton) and Île-Saint-Jean (today’s Prince Edward Island). The town of Louisbourg became the new center of the French fishery.[2]

France gradually built Louisbourg into a major North American fortified stronghold in North America, both militarily and economically. Additional French settlers for Cape Breton were brought from France and Newfoundland, and were joined by a few Acadian families. In 1720, settlers likewise arrived for a colonization project on Île-Saint-Jean. Again, a number of Acadian families joined the settlements on that island.

The Port of Louisbourg at its height [3]

Louisbourg fell to attacking New Englanders in 1745. With that went control of both Île-Royale and Île-Saint-Jean. However, these territories were returned to French control in 1748.

In British Nova Scotia, relations were often strained between the British colonial officials and the fast-growing Acadian majority population. The indigenous people, primarily Mi’kmaq, were old allies of the French, and were often likewise in a mutually uncomfortable status with the British. These frictions intensified after the British founded Halifax in 1749 as a counterbalance to Louisbourg. A rapidly increasing number of Acadians left for Cape Breton and especially for Île-Saint-Jean, encouraged by enhanced incentives from French authorities.

In 1755, the British began a systematic expulsion of the Acadians from Nova Scotia (including what later became New Brunswick). The process did not officially end until the 1763 treaty terminating the Seven Years War. Thousands were shipped away, primarily to the English colonies along the eastern coast of today’s United States.

Meanwhile, the British massed their forces to eliminate Louisbourg as the first major step to removing the French altogether from North America. In July 1758, Louisbourg fell for the second and final time.

The British moved immediately to extend the Expulsion to Île-Royale and Île-Saint-Jean. Although many Acadians eluded the roundup, nearly all French persons and the majority of Acadians there were put onto ships in late 1758, this time for exile in France.

Some prisoners from Île-Saint-Jean already sailed for France in late September of 1758, aboard the Mary, along with many from Île-Royale on other ships, some of which had left a little earlier.[4]

The greatest number of exiles from Île-Saint-Jean, however, left the harbor of Port LaJoye, the island’s capital, in early November, with Saint-Malo as their final destination, on the north coast of Brittany in France. But between there and Louisbourg in Cape Breton, bad weather delayed them, as did the consequent need to load new provisions, so it was about a month before the ships set out on the Atlantic Ocean. By December, severe weather in the North Atlantic always posed a high risk, and few ships customarily attempted a crossing in the late fall or the winter. Nonetheless, the Expulsion went ahead.[5]

Of the 11 transport ships sailing in the November-December crossing, three failed to arrive.[6]

The Violet had set out with 305 captives on board, plus crew. It sank in the open ocean on 12 December. Nobody survived.

The Duke William, having started with 388 exiles, besides crew, went down very close by, most likely on the next day. The crew, the priest, and a handful of survivors made it onto small boats and managed to reach Cornwall on the southwestern end of England.

The Ruby began with 310 prisoners, in addition to over two dozen crew members. It began leaking badly at Portugal’s Azores in the mid-Atlantic, and was wrecked on the shore of Pico, an old volcanic island in the central part of the group. About 120 exiles and 23 “English” (crew members) came away alive, having neither died of disease en route nor drowned in the wreckage.[7]

The Ruby… sprang a leak as it passed to the south of the Azores, and Captain William Kelly made for Faial, one of the islands of the Azores group. He was forced, however, to run the Ruby onto the rocks of Pico, another island in the group, as the vessel was sinking quickly.

At the entrance to the port of Madalena on Pico island, with the island of Faial 7 km off in the background [9] [10]

to be added - statistics from Earle Lockerby; details about the Duke W & the Violet; subsequent info for Ruby survivors; & images 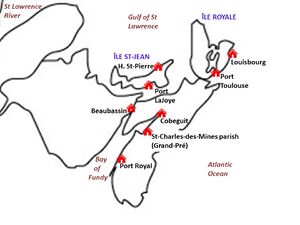 The Port of Louisbourg at its height 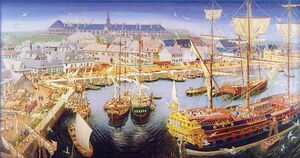 At the entrance to the port of Madalena on Pico island, with the island of Faial 7 km off in the background 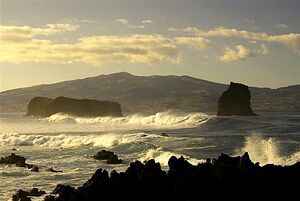