[send private message]
This page has been accessed 1,150 times.

Other pages:
Notables of Eyam
Photographs of Eyam


With Covid-19 lockdown you may be interested in this article from the BBC Coronavirus: What can the 'plague village' of Eyam teach us?

Current destination of The Peak Pilgrimage.


Introduction
Eyam is famous for the bravery of the villagers when struck by the Plague in 1665-66. Instead of fleeing, they isolated the village and in so doing prevented the plague from spreading.

Eyam is a village and parish in the North or High Peak of Derbyshire standing at 250m. It is comprised in the Hundred of the High Peak, in the Honours of Peveril and Tutbury and in the ecclesiastical jurisdiction of the Archdeaconry of Derby, and in the Diocese of Lichfield and Coventry. It comprises of the townships of Eyam and Woodland-Eyam, and the hamlet of Foolow. The village is six miles north of Bakewell and 12 miles from both Sheffield and Buxton. In 1841 census it contained about 180 houses, 954 inhabitants who were chiefly employed in agriculture, lead mining, and cotton and silk weaving. In the 1911 census the village contained about 320 houses, and 1224 inhabitants who were for the most part employed in agriculture, in boot making, and in spar getting. The village is a string settlement nearly a mile in length from Townhead to Townend, built on a ledge or table of limestone so there are many fossils, caves and swallets with the church in the centre of the village. The houses on the south side stand upon the mountain limestone and those on the north are where the shale and grit strata commence.

History
The origin of the name of this old English village - Eyam - little is known. The original name of the village was probably Mosse before the Norman Conquest and because of a battle fought on the heights a little north of Eyam, the name of the village was changed to something like its present name, in honour of the victorious chief. The name has been written variously at different times. In the reign of Henry VI it was written Eyham and has been Wyham, Eam, Eyme, Eyome, Eyum, Ehum, Eham, Hame, Eme, Hyme, Eyham, and Eyam. In the Domesday Book the name is written, according to the way in which the Norman scribes understood the Saxon villagers to pronounce the word, “Aiune”. It is apparently derived from Ea (water), and Ham (a dwelling place), and it is named from the springs and rivulets with which it is abundantly supplied. Thus, it means, “A water dwelling place”. In the Domesday Book it appears as part of the royal demesne (Terra Regis) “In Aiune (Eyam) Caschin held 2 carucates of land (assessed) to the geld. (There is) land for 2 ploughs. There 12 villeins and 7 bordars have 5 ploughs. Wood (land) for pannage i league in length and i league in breadth. In King Edward's time it was worth 20 shillings and (it is worth the same) now”. The Manor of Eyam belonged to Caschin in the time of King Edward the Confessor but when Domesday was compiled, it was the property of the King. It was granted by Henry I to William Peveril, and was held under him by the Morteynes, by whom it was sold in 1307 to the Furnivals. A little north of Eyam, there is a small place called Bretton, a very ancient name which means mountainous. The word is pure Celtic, and it was the name of England long before the Roman invasion. North of the village, Eyam Edge is nearly 600 feet high and runs parallel with the village and a little farther north rises Sir William Hill (429m) with a tract of moorland. The remains of a Druid circle are still to be seen on Eyam Moor and various urns and human remains have been discovered when the barrows have been opened. Roman coins have been found and there are Roman buildings at Brough, near Bradwell and there are the Roman Baths at Stoney Middleton.


Please see here for further information on Notables, What to see in and Around Eyam and Nearby and for relevant Resources.

Read more about Eyam here'
Link to the Eyam category

This is a One Place Study to collect together everything about Eyam, Derbyshire, England. The hope is that this study will be a valuable reference point for people studying lines that cross or intersect. The aim is to work back in time as far as records allow, detailing the lives of the people wherever possible. It is hoped that other researchers who are interested in Derbyshire, England, will make similar studies of the Hamlets, Villages and Towns, which make up the County. A list of these can be found here here

• Research and create sourced profiles of people that were primarily Born, Married and/or Died in Eyam. • Note people that "passed through" or who were living in Eyam at the time of the census but were not otherwise included, because of birth, marriage or death and store them for future addition to complete profiles. • Detail lives wherever possible. • Add appropriate categories to all profiles. 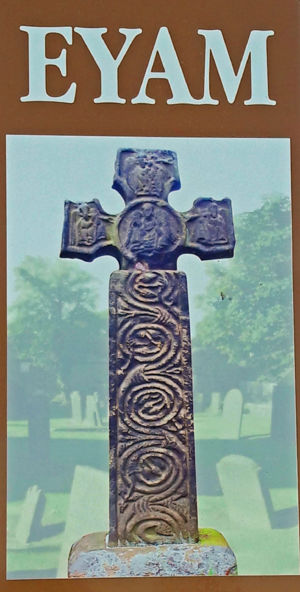