[send private message]
This page has been accessed 610 times.

The Dunkirk Coal Company which was the original developer was taken over by Samuel Swire and Henry Lees as the Dukinfield Coal and Cannel Company. They managed a number of mines in the Dukinfield area. There were three clusters of mines under their control. Flowery Field was in the eastern cluster. The Dukinfield company first sank shafts in Flowery Fields around 1832. At that time they gave notice they were planning to extract coal to a depth of 50 yards. The Flowery Fields pit worked the Black Mine. [2]

The following was written by George Eaton who was a coal miner himself and he lived in Dukinfield in 1837. This is offered to add context to life in this time and place.

"In 1837, the pit was about 70 yards deep to the mouthing. There were iron conductors in the pit. The tubs held 4cwt of coal and had ears. There were no chains so hooks were used instead of flat hemp ropes to wind with, there were flat chains of four longish links, and those links that ran flat over the pulleys were packed firmly with wood inside the links, the next four links ran over the pulley on all the under edges and were not packed. When the engine was winding the jingling of the chains could be heard at a considerable distance from the pit. The chains were fully as wide as an ordinary flat hempen rope. I never saw chains like them before or since. The miners thought that hemp ropes were safer than chain ropes." [3]

The colliery was the property of Messrs. Swire and Lees and was located in Newton, near Hyde and employed 50-60 men and boys. The mine was entered by a shaft about 160 yards deep and at the bottom there was a tramway or inclined plane over 300 yards long. This is where the wagons of coal were taken by a steam engine. At the end of the tramway there was a landing place or flat space about ten yards. From here there was another tramway up an incline about 300 yards long to another landing. The coal was taken from all parts of the mine to this place by mules. The explosion occurred on this level about 200 yards from the extreme end of the pit.

On Friday, 8 April 1842 about eleven o'clock an explosion of carburated hydrogen gas occurred. A terrible rumbling was heard and flames erupted from the mouth of the pit. It is thought that the explosion happened in the dirthole. Seventeen people died that day. Most of the deaths were caused by suffocation due to the gas. Two of the dead were badly burned and the other died when the roof collapsed on him.

An inquest was held the following Monday, 11 April 1842 at the White Hart Hotel on Old Road, Flowery Field. Testimony was extended for a second day in order to include all witnesses.

The Investigation team determined that the epicenter of the explosion was in the disused "dirt whale" workings (no longer in use).

They also determined that the ventilation for this unused area had become partially blocked due to a build up of rubble. The result of this inadequate ventilation was an accumulation of firedamp (methane) in the enclosed area. Someone may have entered that area with a naked candle which caused the explosion.

Testimony at the inquest revealed the following information:

According to a detailed article in The Guardian newspaper, several conclusions could be drawn.

The impression was that none of the miners were knowledgeable about the natural laws that govern the movement of gases.

The jury deliberated for 10 minutes before they rendered a judgement. Although they judged the event an accident with no fault assigned, they did recommend that in the future to either completely fill the dirt-hole or to leave ventilation open. [4]

The following men testified at the inquest:[5]

7 Injured Survivors of the Explosion [7]

Mr. Frederick Tinkler and Mr. Potter, surgeons arrived to give what help they could but it was several hours before it was deemed safe to go down into the pit. The underlooker descended and after a protracted and dangerous search, he and his party succeeded in finding eight of the missing colliers. However, all were dead, some bruised, some suffocated and others much bruised. Shortly afterwards another seven bodies were located and all were taken to the pit head. The search continued and after about an hour the remaining ten were discovered at the extreme end of the mine where they had run for safety. Bowker and Grimshaw were alive but in a desperate state. Bowker died soon after he was found and Grimshaw expired in the arms of a fellow workman but four of the eight recovered and made their way to the pit.

Others Involved/Supporters and the Aftermath

Many were involved after the disaster: Tinker and Potter were both surgeons. They came to the mine but were told that all were dead so they left. Subsequently, eight were brought up to the surface. There was a delay in the injured being seen by a surgeon which may have resulted in death. Frederick Tinker, surgeon John Wright Mr. Potter Mr. Taylor 2 surgeons from Dukinfield

The community worked together to provide for the destitute and bereaved widows and families of those killed in the explosion. A subscription was begun under the auspices of Capt. Clarke, who agreed to act as treasurer and Mr. Coulthart, manager of the Ashton Bank. The Guardian newspaper described the conditions thus "in external , apart from their present loss of those who maintained them, the inmates of many of these houses were but just able to gain a bare livelihood. ... many of them must actually want for food." [8]

Three years later, in November, 1845 there is a first-hand account of a subsequent explosion at the Flowery Field mine. George Eaton gives the following account:

He was the Wagoner for the crew of two who were hewing the coal and George was delivering it to “other hands”. He was working the second shift which started at 2pm. They were using candles by sticking them upright in the soft clay.

At about 6 pm, after George returned from his lunch break, one of the workers hewing coal “broke through” into an old wagon road. The other worker was digging without light because “there is gas in the old level”. George was instructed to test if there was gas by lighting a candle. He observed that a candle already burning suddenly became “a torch” and even though they ran, both were burned by the exploding gas. The underground manager was not present, so did not authorize proceeding without safety checks after the sealed tunnel was opened.

After the explosion, George crawled to an exit point and the three men were taken home. George states that the explosion was a “great blunder” because when the cut was made into another tunnel, there should have been an air test and a safety lantern used instead of candles. The old tunnel had been sealed and there was no ventilation so there was an expectation that the sealed level would be full of either choke damp or fire damp.

So, even three years after the 1842 explosion, there continued to be unsafe practices in the very dangerous environment of a pit mine. The miners preferred to use candles instead of the safety lamp. This may be because of the safety lamp's dim light. Eaton Journals 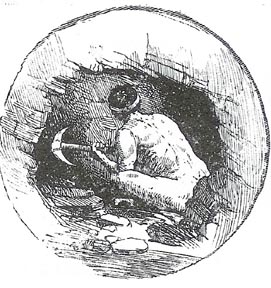 Candle lighting in the mine 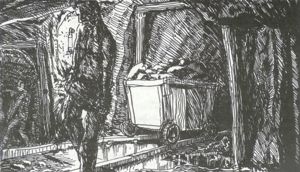