[send private message]
This page has been accessed 1,380 times.

In the autumn of 1777, when it became known that the Indian Nations northwest of the Ohio would become the allies of Great Britain, an invasion of their country was planned, this to be commanded by General Edward Hand. A call for troops for this purpose was made on the West Virginia frontiersmen, and Major George Skillern raised two companies in Botetourt county, which, with forty Greenbrier county men under Captain William Renick, repaired to Point Pleasant, at the mouth of the Great Kanawha river. At the same time and for the same purpose, Captain William Foreman, of Hampshire county, collected a company of men in the South Branch Valley, and marched to the Ohio, arriving at Fort Henry, now Wheeling, on the 15th of September, fifteen days after the first siege at that place. On Sunday, the 26th ensuing, a great column of smoke was seen down the river and David Shepherd, a County-Lieutenant of Ohio county, believing that the Indians had set fire to the deserted Fort Tomlinson, on the Grave Creek Flats - now Moundsville - dispatched Captain Foreman with forty-five men to that place. No Indians were seen, the fort was intact and the troops spent the night at that place. The next day when returning to Wheeling, the party fell into an ambuscade at "McMechen Narrows," on the Ohio river, now in Marshall county, and twenty-one of the Virginians were killed at the first fire and several badly wounded. The sad event is known in pioneer annals as "Foreman's Defeat", and long was heard the sorrowful story in the homes of the South Branch Valley and among the Hampshire Hills [[1]]

A partial list of the Hampshire County men at the Defeat of Captain William Foreman at "McMechen Narrows" between the sites of Wheeling and Moundsville, West Virginia, September 27, 1777 [1][2] 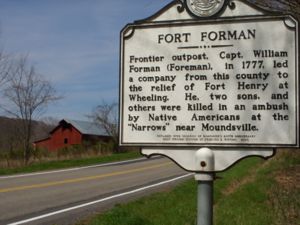 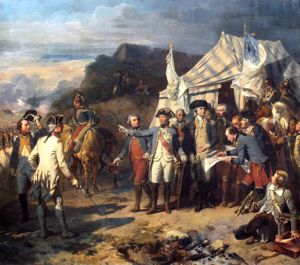 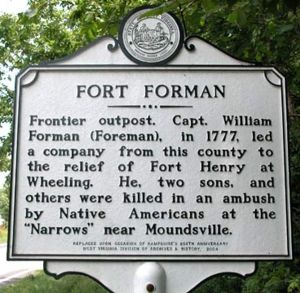