[send private message]
This page has been accessed 134 times.

Göringen is a village in the German state of Thuringia (Thüringen). It is 12 km west of Eisenach (It is in the administrative district of Eisenach) on the banks of the Werra river. It sits on the southwest edge of the Thuringian forest.

Neighboring communities include Wartha to the north, Neuenhof to the southeast, Lauchröden (in Wartburg County) to the west, and Herleshausen (state of Hesse) to the Northwest.

Göringen is right on the Thuringia/Hesse state border. Putting it on the border of East and West Germany. Stuck in East Germany, it had a tantalizing view of freedom just across the river. A couple with the last name Henning left their restaurant in Göringen and attempted to reach freedom across the river, only to drown in the Werra. Note: this story was told to us by a long time resident of Göringen. Hennings-109 21:26, 20 February 2016 (EST)

During the middle ages, Göringen was the support village for the Brandenburg castle located less than a mile to the west. They provided goods and services to the castle and the castle protected the village. The castle was abandoned in the mid 1600s, following the Thirty Years War. It fell into disrepair and was used as a stone quarry. Brandenburg was a double castle divided east and west. Most of the western castle was carried away before it became a protected site in 1841. Much of the eastern castle was rebuilt, but it remains a ruin. [2] 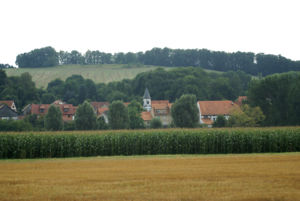