[send private message]
This page has been accessed 881 times.

The goal of this project is to compare and collate Y-DNA results from individuals with the surname GARDNER or variants. The original focus was on the R-U106/S21 sub-clade of R-M269 but has been expanded to include all haplogroups of interest.

Please post a comment here on this page, in G2G using the project tag, or send me a private message. Thanks!

This is an attempt to summarize some of the Y-DNA genetic tests performed by individuals with the Gardner surname and it's variations and to tie them to individuals with profiles in WikiTree. The goal is to match the different Gardner lines with their "founder" haplogroup and subclade. Tree development and testing individual's Y-DNA are ongoing processes so anyone with interest in Gardner families and genetic genealogy are welcome to expand or contribute to this page.

FamilyTreeDNA is a major DNA testing company and supports user groups called "projects" for those who share a surname or haplogroup. The Gardner Surname Project has 547 contributions as of January 2022. Initially FamilyTree offered a 12-STR Y-DNA test to get people started. Unfortunately, this didn't provide enough genetic information to be useful. Today the minimum is the 37-STR test ($119) but many are forking out the $449 for the "Big-Y" test that provides a complete profile. It is possible to take the 37-STR test which may identify probable terminal SNiPs that can be tested at a lower cost currently $40 per SNP or $119 for SNP "Packs."

For those considering getting a DNA test, a good start would be the Y-DNA 37-STR test and the Family Finder autosomal-DNA test, then join the surname project and look for matches. If you've already taken the autosomal test with Ancestry or 23-and-me, you can skip that. Look for sales during family holidays such as Mother's Day and Thanksgiving.

A good explanation of how STR and SNP testing work together can be found in the ISOGG Wiki for the R1b haplogroup but applies to all haplogroups: https://isogg.org/wiki/Haplogroup_R1b_(Y-DNA)

The Gardner Surname Project results are provided in a table with individual results grouped together by the administrators using matching STRs. Many of the tests have too few STRs to be useful or lack information about the earliest known ancestor and are, thus, "ungrouped." As more people get tested and existing tests get upgraded more data will become available.

Clustering analysis was performed to help visualize the relationships of the many individual testers. Check the images for dendograms and other charts created from the Gardner Surname Project data.

Below are the results of analyzing surname project tests with at least 37 STRs. Eliminating those with non-Gardner ancestor surnames or missing surnames results in 172 individual tests. Haplogroup percentages are based on this total.

Note: Links are to "potential" ancestors within a haplogroup and are based on current testers who have a paper trail or other knowledge about their earliest known ancestor or based on close matches to current WikiTree profiles. Ancestor info provided by members of FTDNA Gardner Surname Project in results table.

Note: This is the umbrella haplogroup that most "R" testers fall into and includes the majority of Y-DNA testers with Western Europe origins particularly Great Britain. These testers require further STR/SNP testing to move further down the phylogenetic tree. Shown here are some of the ancestors for these tests that didn't fall into a lower subhaplogroup.

Other Haplogroups with Gardner Ancestors

Y-DNA: The DNA in the Y chromosome that can be passed by a male only to his sons. This DNA can be tested to determine both haplotype and haplogroup of the individual.

Genetic Genealogy: The tracing of human lineage within the time frame of historical records through DNA testing and comparison of haplotypes.

Genealogical Time Frame: A time frame within the last 500 up to 1000 years since the adoption of surnames and written family records. An individual's haplotype is useful within this time frame and is compared to others to help identify branches within a family.

Haplogroup: A population descended from a common ancestor, as evidenced by specific SNP mutations. Haplogroups are not cultural groups, although a haplogroup can be strongly represented by a cultural population such as American Indians. The Y Chromosome Consortium (YCC) has assigned hierarchical alphanumeric labels, which can be presented graphically in the form of a phylogenetic or haplogroup tree (see below).

Haplotype: Broadly, the complete set of results obtained from multiple markers located on a single chromosome. For the Y chromosome, the term is restricted by convention to allele values (number of repeats) obtained from microsatellite (STR) markers, as described by the Y Chromosome Consortium (YCC).

Non-paternity event (NPE): is a term used in genetic genealogy to describe any event which has caused a break in the link between an hereditary surname and the Y-chromosome resulting in a son using a different surname from that of his biological father. The definition excludes minor changes in the spelling of the surname, and is implicitly limited to events after the relevant branch of the surname became hereditary.

Short Tandem Repeats (STR - pronounced ess-tee-are): Patterns in the DNA sequence which repeat over and over again in tandem, i.e., right after each other. Typically the repeat motif is less than six (6) base pairs long. By counting the repeats, one gets an allele value which is given in an individual's haplotype. They are also called microsatellites and Simple Sequence Repeats (SSRs).

Single Nucleotide Polymorphism (SNP which is pronounced 'snip'): Variation in the nucleotide allele at a certain nucleotide position in the human genome. When the change occurs it is called a polymorphism, and polymorphisms accumulate over time. A polymorphism can be very common (found in a significant fraction of global or localized populations) or very rare (found in a single individual). Common variations are used to track the evolution of the human genome over time (population genetics) and can be graphically represented in a haplogroup or phylogenetic tree.

Clade: From the Greek word klados, meaning branch. A clade on the Y chromosome tree is also called a haplogroup.

Subclade: A term to describe the relationship between two clades with the subclade being downstream. See also Sub-branch. 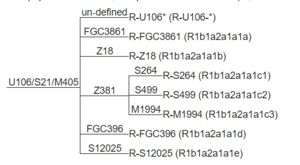 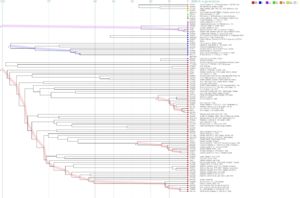 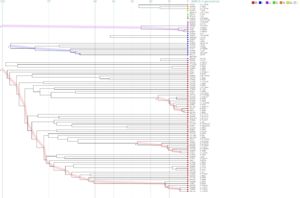 Randall Gardner
Robert, I will help all I can. It would be good to connect some descendants across the pond also to try to confirm the ancestry of George. You can see on my profile page that I've tested on ftdna already. I'm not great on Y-dna. Still learning.
posted May 05, 2020 by Randall Gardner

Robert Gardner
That's great, hopefully a few people will be interested. On FTDNA your test in the Gardner Surname project was "Ungrouped". I noticed that there were a few adjacent tests with the Gardiner surname so I ran the clustering program with 37-STR or higher and yours is right in the middle of the George Gardiners. Check the new dendogram I just uploaded. Your test is highlighted in red. Based on neighbors who've done SNP testing, your haplotree path would be R-M269 -> U106 -> Z381 -> S499(Z301) -> L48 -> Z9 -> Z30 -> Z1... to terminal. Your FTDNA account may have a suggested SNP test upgrade or you can try joining the U106 project to get a recommendation. Your profile and family research is great. Unfortunately we're not related except for a common ancestor around 4,000 years ago(Z301)!
posted May 06, 2020 by Robert Gardner