[send private message]
This page has been accessed 3,022 times.

Welcome to the Gardner One Name Study

The Gardner Name Study project serves as a collaborative platform to collect information on the Gardner name. The hope is that other researchers like you will join the study to help make it a valuable reference point for other genealogists who are researching or have an interest in the Gardner name.

As a One Name Study, this project is not limited to persons who are related biologically. Individual team studies can be used to branch out the research into specific methods and areas of interest, such as geographically (England Gardners), by time period (18th Century Gardners), or by topic (Gardner DNA, Gardner Occupations, Gardner Statistics). These studies may also include a number of family branches which have no immediate link with each other. Some researchers may even be motivated to go beyond the profile identification and research stage to compile fully sourced, single-family histories of some of the families they discover through this name study project.

If a team does not yet exist for your particular area of interest, please contact the Name Study Coordinator: Charlotte Shockey for assistance.

Add the following to the top of your profile if you'd like to be part of the study: {{One Name Study|name=Gardner}}

The objective of this study is to identify all Gardner and Gardiner cousins. The sort out the brick walls and find solutions.

What You Can Do

Below are either brickwalls or not fully connected to the One Tree.

The history of the name Gardner dates back to the ancient Anglo-Saxon culture of Britain. It is derived from a member of the family who worked as a gardener. The surname Gardner originally derived from the Old French word gardinier. It was later adopted in England after the Norman Conquest of 1066.

The following are books written by Gardner's and descendants that are not of a genealogical matter. 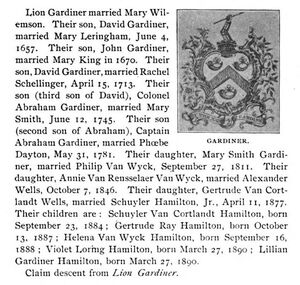 Leave a message for others who see this profile.
There are no comments yet.
Login to post a comment.
Howard Reynolds
Includes all Gardner. However, my specialty is for Gardiners descended in Narrangansett, R.I.
posted Nov 22, 2020 by Howard Reynolds
H. Russell
I am looking for "Temperance Gardner" married to Levi Joy of Boston in 1794. Levi died in 1811, then she married James Packer. I have found her in Grafton County, New Hampshire. But, I cannot find any birth records nor a death record (yet).

I have found a "Temperance Gardner" of Nantucket, MA - she seems to be of African decent. I am beginning to wonder if the two are the same person.

Does your study include African Americans named "Gardner"?

I'm a casual WikiTree user but it looks like I've added over 1200 profiles over the past few years and a couple "Free-Space" pages like the "Gardner Family Lines in New England" linked above.

I just added another Free-Space page, since we're stuck at home, that summarizes some of the Y-DNA data from the FamilyTreeDNA Gardner Surname Project. I found a "cool tool" app that clusters the tests and creates dendograms of related haplogroup clades. The page is GARDNER_R-U106_DNA: https://www.wikitree.com/wiki/Space:GARDNER%20R-U106%20DNA%20Project

Check out the graphs. I noticed the top person in the Brick Wall list above, George Gardiner (Gardiner-38) has some descendants who've done the Y-DNA test. So my small request is that everyone out there who is a Gardner, submit their Y-DNA to be added so we can sort out some of the lines--especially in Tennessee and North Carolina.

I'm not a DNA expert but as far as my understanding goes, the more data the better. I also noticed that the WikiTree DNA project categories are a bit dated. A bunch of Gardner profiles(18) were placed in the R1b1b2 category which was renamed to R-M269, R1b1a1a2, almost 10 years ago. Maybe someone else has more experience with this. My info comes from Wikipedia.

Enrique Treat (Gleason Gleeson) Gleason Esq.
I am not an Autosomal DNA expert but I am fairly knowledgeable on the subject. My discovery is the following: I am currently matching over 27,000 AncestryDNA testers and I find it just too coincidental that two of my matches are surnamed SLAUGHTER. Furthermore, I dont consider the surname SLAUGHTER to be a common surname at all. Finally, since Benoni Gardner is my 7th great grandfather, his mother, in my opinion, was Sarah SLAUGHTER, especially since my two SLAUGHTER matches are very distant, meaning that they appear to fit the range in distance to a possible 8th great grandparent. Sarah SLAUGHTER would therefore be my 8th great grandmother.
posted Sep 10, 2019 by Enrique Treat (Gleason Gleeson) Gleason Esq.

If this document is referring to Benoni Gardiner, then I would argue that his date of birth must have been on or before his baptism date. Again, document states BAPTISM DATE as being 22 MAY 1636. Again, his place of baptism is shown as Castle-Hedingham, Essex, England.

Gardner Junction, near Gardner, KS. Split of the Santa Fe and Oregon Trails.

Gardner, CO with views of the Sangre De Cristo range.

Gardiner, OR, where barque Bostonian wrecked (1850).

Gardiners Island is still in the family.

posted Jun 29, 2019 by John M. Switlik
Howard Reynolds
Kenneth, thank you for testing using the autosomal method. That method will let you compare results and let you know if another (male or female) is related and if so approximately how close (1st thru 8th cousins).

Another type of dna test are matriarchial for females for only identifying females in the line. The 3rd test is the y-dna test The last is ydna for males to identify only the males in the male line. It would be great if your mother's brother (a Gardner) could take the ydna test. If your Gardiners are a part of the Narrangansett clan, then I can probably take you back to the original Immigrant, George b. ca 1599.