[send private message]
This page has been accessed 55,592 times.
This is a Legacy page of the Magna Carta Project. The page is no longer actively used, except as a reference. It was the main page for the Gateway Ancestors subproject when the project also had a Questionable Gateway Ancestors subproject (which was retired in 2018). This information on this page is up to date (although the project no longer works on trails for Gateways not documented by Richardson).
Reviewed: Noland-165 15:22, 6 August 2019 (UTC)

The following profiles are within the scope of the Magna Carta Project.

Married women are listed in two places: under their LNAB and also their married surname.[1]

Additional Gateway Ancestors (to be confirmed)

Profiles listed below are not on Richardson's list but may have sufficient documentation to show they are linked to the Surety Barons. Once confirmed they are moved to the confirmed Gateway Ancestors list. Please add your ancestor's name below and link their name to their profile. To be confirmed, documentation needs to be on the profile and on each of the profiles that link them to Surety Barons. Include a section on the profile listing the names linking to the barons, (in link format to make it easy to evaluate and confirm).

I have put my evidence for their ancestry on the workbook page.

I have posted this also to the workbook page. Documentation is on each profile. I did not copy the above to each profile (as I had received guidance from Peter about such lists on profiles: "please don't"). Noland-165 01:01, 17 May 2015 (EDT)

From JSS: There is another lineage that also quickly connects to Richardson:

I have put what evidence I have for their ancestry on the Potential Gateway Ancestors page; hopefully others will eventually come along and add to it or provide contradictory evidence.

If anyone knows of contradictory evidence to any current profiles in our project or potentially in our project, please add it to Popular Errors. 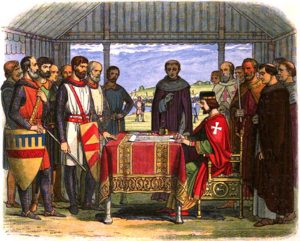 Liz (Noland) Shifflett
I may have misunderstood Irene's question. I responded on her profile with information about descendant stickers. I was going to post here about the list of names posted here was based on the Gateway Ancestors listed by Ricahrdson in his Magna Carta Ancestry and Royal Ancestry and is currently pretty much static, but none of the surnames she mentions are listed.
posted Jan 02, 2019 by Liz (Noland) Shifflett
Irene Stone
I am descended from the Davis, Stone, Towne, Nurse families listed, and my children also have the Guild family listed (Samuel and Gregory). What is the best way for me to note that - and where? I also note that singular members of the families are listed, but not siblings. What is the proof required for a sibling whose parent is listed, to become listed?
posted Jan 02, 2019 by Irene Stone

Liz (Noland) Shifflett
Adding Gateway Ancestors to the scope of the project can be done after the trail for that person has been developed (primary sources required for relationships not documented in Richardson's works).
posted Oct 27, 2018 by Liz (Noland) Shifflett
Mohammed Ludwick
Is there a procedure for adding a person to the list of gateway ancestors?

Harlan-32, Moses Harlan, emigrated from Ireland to Pennsylvania, and was the great-great grandson of John Calvert, who is on many of the same lines as the Calverts on this list.

Liz (Noland) Shifflett
I'm not a manager of this page, so I don't receive a notice that a comment has been posted to this page.

To all who would like to have an ancestor added as a Gateway Ancestor... The subproject that worked on that is no longer active. See Category:Questionable Gateway Ancestors for details.

While it is possible to have a non-Richardson profile added to the project's Gateway Ancestors, each generation from the proposed Gateway to a profile that is documented by Richardson as a descendant of a Surety Baron, you need a primary source to prove the relationship.

@ Carolyn: I looked at several generations up from Parsons-882 and none had good sources (citing "Our Kingdom Come..." and an Ancestry link isn't enough - if either gave a source, you need to cite the that source, crediting the book or Ancestry).

John M. Switlik
I will dig deeper, but I put a kudos for you guys on Quora.

I just picked Christopher Batt randomly. And, followed three clicks back to Bigod which allowed me to remind every English person to remember William Marshal who kept us from having to speak French.

Very impressive. I have answered several questions on the Magna Carta and will use WikiTree henceforth.

posted Jul 28, 2018 by John M. Switlik
Cassandra Scott
I am directly related to all but one of the Magne Carte barons (the other is a first cousin 28 times removed). Is this common?
posted May 28, 2018 by Cassandra Scott
J Briller
Should (Brewster-622) Rev. Nathaniel Brewster's child(ren) (Abigail, possibly Sarah, and possibly Timothy) by his first marriage also be included here? If the profile for Abigail Reymes is correct, her g-g-g-g-grandmother was Elizabeth Boleyn, descended from Plantagenet kings and at least two Surety Barons, Henry de Bohun and Saher Quincy. Abigail's children would have been the first generation of her, possibly royal, line to immigrate as they are all presumed to have been born in England.

Just for clarity, Nathaniel Brewster's second wife was Sarah Ludlow, whose father is already on this list.

posted May 10, 2018 by J Briller
S. Small
About James Blount: there are wills that link all the ancestors from James back to Walter Blount, son of Sir Thomas Blount and Anne Croft. (Beyond that I think it is pretty well documented.) James Blount who came to Va. and NC is mentioned by name in his uncle's will. In it he is described as "one of the sons of my late brother James Blount" and is said to be living beyond the sea. There are wills for everyone except Jame's father, but his uncle's will names both of them. All of the wills can be viewed via links on this website: http://www.lamartin.com/genealogy.aspx
posted May 03, 2018 by S. Small