[send private message]
This page has been accessed 4,567 times.

We are the descendants, genealogists and aficionados of the German New River Settlement of Virginia, which antecedes the English Settlement of "Drapers Meadow "

Our mission is to unite and clarify family lines through community sharing and documentation. We are honoring our ancestors who left their beloved Germany in the early & mid-1700s to settle in the New Colonies of America. They arrived at the place on the New River that reminded them of their homeland. Some names of these settlers (NOT INCLUSIVE) were as follows:

"The German New River Settlement, contiguous to but not technically part of the Middle New River Settlement of Southwest Virginia, occupied an area consisting roughly of the contemporary counties of Giles, Montgomery, and Pulaski. It was settled in the mid-18th century by Rhinelanders from the Palatinate in Germany..." [1]

To add a migrating ancestor template to a profile, copy the following and paste it on the profile:

To customize the template for your target profile go to Flag Images to find different flags or go directly to State Flags. (Copy the file names of the flags you want to use, and paste them to the right of the = sign for origin and destination flags).

You can also go to the blank template , copy and paste it to your page, and add your customized information.

For ancestors who did NOT migrate, see the Nonmigrating Ancestor template - you can also customize the following (see the template page for details about the "addinfo" parameter):

For guidance in setting up categories for cemeteries:

On individual Cemetery pages, resources should be listed along with a description. 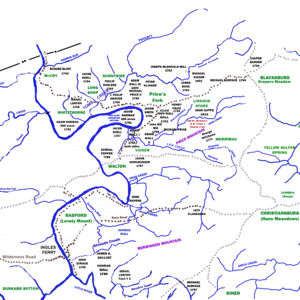 Jillaine Smith
Could you please remove any text, link or categories related to US Southern Colonies Project since we are not involved in this project? Thank you.
posted May 30, 2020 by Jillaine Smith

update - Jillaine deleted that section & links to the Southern Colonies pages that had been provided (Project Home Page, Main Image Page, Project Resource Home Page). Perhaps these pages are going away under the restructuring taking place.

Ellen Smith
I am not familiar with the New River settlements per se, but it appears to me that these people were part of the population that we cover in the Palatine Migration Project. Check the project pages to see why I say that.
posted Jun 06, 2020 by Ellen Smith

Ellen Smith
That Germanna Descendants page is just one of several independently created free-space projects for the Germanna settlers that have been treated as Virginia projects. When we set up the Palatine Migration Project, we kept hands off Germanna because we did not know what it was, and the descriptions in WikiTree indicated that the Germanna settlers had arrived under the sponsorship of Lt. Governor Alexander Spotswood, and thus were separate and distinct from the larger wave of Palatine migrations of the 1700s. I am not entirely sure that is the case, as I have seen indications that some Germanna settlers arrived in Philadelphia on Palatine immigrant ships and went to Germanna.

Regardless of that, it looks to me like these New River settlers probably were part of that larger wave of Palatine migrations.

and also - could you add [Category: Virginia Immigration]

In researching that category, I found [Category: Virginia History], which you might want to add also.

Hi! Could you add Category:Virginia Colony & the location categories for the modern counties?