Germany in the Great War

[send private message]
This page has been accessed 643 times.

Germany in The Great War

The Great War started with a bullet that killed the Austrian leader and his wife, but countries had been arming their military in the past years. With the murder, Austra- Hungary declared war against Serbia. Germany's kaiser encouraged Vienna to settle accounts with Serbia. There was a domino effect. By issuing a “blank check” to Austria‐Hungary on 5 July 1914, this seems to have increased the speed of the domino's falling for this war. The risk was high when dealing with powers as their armies were ready, and means to accomplish this.

Two camps: the Triple Alliance (Germany, Austria‐Hungary, Italy) and the Triple Entente (Britain, France, Russia), also known as Allied Powers which included Serbia's protector, the Czarist government. Following many years the Central powers, of which Germany was one were defeated by the Allied Powers. Germany sent forces to both its western and eastern front, a strain on the military. In the beginning East Prussia invaded Germany in 1914.

The lack of food which Germany was importing, did cause a food shortage The winter of 1916-1917 was Turnip Winter. The potato crop was poor, and agriculture suffered due to a large military recruitment left fewer people to farm. Less potatoes meant German people ate turnips (usually used for livestock).

Signs on the railroad car say "See you in Paris". German government, authoritarians thought the war would end their problems with France, Russia and Britain. No one was expecting it to last longer than a few months. It lasted 1914-1919 during which 474,000 civilians died (exhaustion, disease).

Kaiser Wilhelm II was the last Kaiser (emperor) of the German Empire. His first cousin was George V, (King of England). His second cousin was Nicholas II (Tsar of Russia). He eventually lost the support of the army, so that he retained very little power to issue commands by end of the war. In 1918, he abdicated the throne, fleeing the country.

German army began the World War I using a the war on the Western Front with a modified version of the Schlieffen Plan on its Western Front. This was to blast through neutral Belgium then quickly attack France then turn down south before overcoming and closing the circle around the French army on the German border.

TYPES OF WARFARE USED IN THE GREAT WAR

Trench warfare was a new type of warfare.

GASES used in World War I 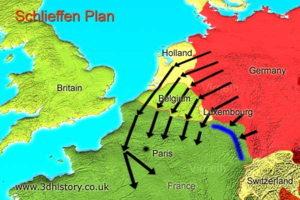 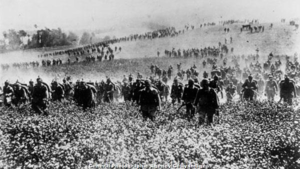 German soldiers on the way to the front in 1914 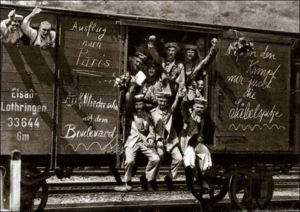 The Battle of the Marne was a victory for the Allies 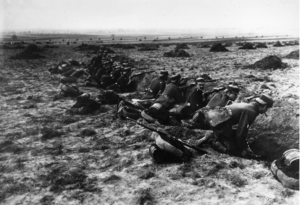