[send private message]
This page has been accessed 425 times.

1566: Attempts were made by the Spaniard Moyano to establish Catholic missions, but was not successful.[1]

1665: This region was originally claimed by the Spanish as part of Florida, until 1665, then it became part of Carolina.[1]

1732: Granted by charter to James Oglethorpe and became part of the Province of Georgia.[1]

1769: The first non-Indian settlers arrived and established homes in Talking Rock, which is now a part of Pickens County, along the Old Federal Road. This road was an access road granted by the Cherokee.[1]

1814: Cherokee Chief Whitepath, a warrior living just 5 miles north of Ellijay, and Chief John Ross, swam across the Tallapoosa River and stole the Creek canoes prior to the Battle of Horseshoe Bend, ensuring a victory for his friend, Andrew Jackson.[2]

1829: During the short period of "gold fever" in and around Gilmer County, prospectors came and some established the Georgia Whitepath Copper and Gold Mining Company; however the gold rush ended in the 1840's.

1831: Cherokee County was created by the state legislature. This included all land west of the Chattahoochee River and north of Carroll County.[1]

1832: Incorporated 3 Dec 1832 from Cherokee County, formerly the Cherokee Nation, as the 85th county of Georgia. Named after George Rockingham Gilmer, two-time Governor of Georgia, a state legistlator, and a US Congressman. He was a strong proponent of state sovereignty over Cherokee lands in Georgia and was governor at the time of the Cherokee's forced removal to the west. Originally, the county extended to the Tennessee border, but it was later divided into portions of Pickens, Fannin, and Dawson counties. It was divided because of the large number of Cherokee Indians inhabiting the area and was too difficult to administer. Gilmer County was reduced by almost 68% of it's original size, subsequently most of it's historic sites are located in what is now Pickens County. The Georgia Land Lottery occured during this time, even though the Cherokee had not relinquished their rights to the land.[3][1]

1834: The county seat was established in Ellijay. The name Ellijay is said to be from the Cherokee word "Elatseyi" meaning "new ground" or "green place".[3]

1836-1837: http://www.fortwiki.com/Fort_Hetzel Fort Hetzel} was established to house the Cherokee Indians that were remaining in the area, then eventually moved west to Oklahoma. Many Indians died during the 6 months they were housed there due to little food and no sanitation. It was abandoned by 1842.[2]

1883: Residents successfully worked diligently to secure the arrival of the Marietta and the North Georgia railroad. Ellijay residents eaterly awaited the convenience of the railroad, but the road to the county seat was not completed until 1884. The construction of a roundhouse was started since it would be 1890 before service was established further north. [1]

1903: John W. Clayton planted the first commercial apple orchard in Gilmer County. He competed nationally, taking first prize in 1913 at the State College of Agriculture in New York, along with top honors at county fairs. By 1926, he had over 5,000 apple trees. The top varieties were Winesap, Rome Beauty, and Ben Davis.

1908-1916: In 1908, the first automobile arrived and this was a significant advance in the development of the area, along with the telephone in 1916. Once the development of Highway 515 was completed, a new age was brought to Gilmer.[2]

1920's: Boll weevils destroyed Georgia's cotton crops; the county's economy was bolstered by its apple orchards. The county is known as the "Apple Capital of Georgia". [3]

1939: Plans were begun to install electricity in every home after the Rural Electrification Act was passed by Congress in 1935. This plans was interrupted by WWI, but power was available to every person by 1950.[2]

1991: Ga Highway 515 was completed and brought increasing numbers of tourists, drawn by the county's apples, scenery and various festivals.[2]

Current: There are eleven apple orchards with roughly 35 varieties in Gilmer County, supplying the state with 60 percent of the apple crops sold in grocery stores. See Georgia's Apples.

Beginning in 1946, Gilmer County was governed by a sole commission, three in all, up until 1988. It is now a five-member board plus a county manager.[3]. See Gilmer County Government Official Website.

1832 - "The place where Ned Tucker recently lived" was designated for meetings and elections[4]
1833 - wooden courthouse was constructed at that location
1854 - new courthouse was built and served the county for 80 years
1934 - The Hyatt Hotel (constructed in 1898) facing the downtown square was converted for use as the courthouse. This was the only courthouse in the State of Georgia nor originally built as a courthouse. Later, a private brick home across the street was purchased and converted into a courthouse annex.
1980 - listed on the National Register of Historic Places
2003 - the courthouse was condemned by the Gilmer County Fire Marshall because of extensive code violations and it was closed; county officers voted to destroy the building rather than renovate and restore it
2005 - identified as threatened by the Northwest Georgia Threatened Historic Sites Project
2008 - the original courthouse was demolished
2009 - the new courthouse was completed, located at the same site

29.2% had children under the age of 18 living with them, 57.2% were married couples living together, 8.9% had a female householder with no husband present, 29.3% were non-families, and 24.5% of all households were made up of individuals

Gennett Poplar - a giant yellow poplar measuring over 18-20 feet in circumference at its base and 100 feet tall; said to be the 2nd tallest tree in Georgia; named after the original landowner who spared it from the widespread deforestation that took place in the 19th and early 20th centuries.[3][14] See photos here
Apple Festival - held annually every October since 1971 in Ellijay. See also Wikipedia: Georgia Apple Festival.

Hetzel a Trail of Tears Cherokee Removal Fort established in 1837, abandoned a year later[15]
Cartecay Methodist Church and Cemetery the church was organized in 1834 and the buildling was constructed about 1859[15]
General David Bailey Freeman the youngest confederate soldier[15]
Ebenezer Baptist Church established 1839[15]
Gilmer County established 1832 out of Cherokee County[15]
Gilmore County War Memorial erected in 1980 in dedication to all who served[15]
Whitepath home of Chief Whitepath, a full-blood traditionalist leader and member of the Cherokee National Council[15]
Oakland Academy established in 1867[15]
Springer Mountain [15]

George Rockingham Gilmer 34th Governor of Georgia; served as first lieutenant in the Forty-third Infantry Regiment from 1813 to 1815 in the campaign against the Creek during the War of 1812[16]
Hon Albert Henry Burtz (1878-1953) Mayor of Ellijay
John L Woody (1796-1873) Pioneer of Gilmer County 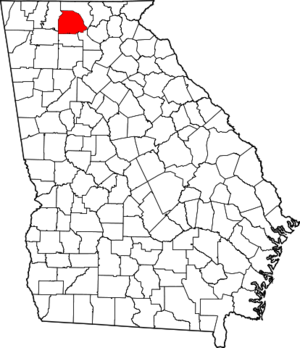 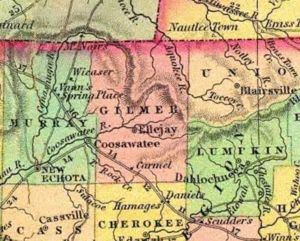 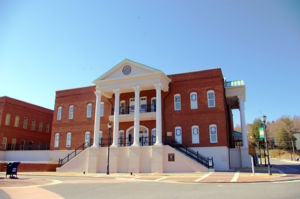