[send private message]
This page has been accessed 1,755 times.

Groombridge Place is a moated manor house in the village of Groombridge near Tunbridge Wells, Kent, England. The manor house has an associated Dower House and extensive gardens largely designed by John Evelyn (1620-1706), noted diarist and horticulturalist [1]

The house and moat can easily be seen in Google Maps.

"There have been manor houses on the site of the present Groombridge for centuries. The earliest mention of one of these is from 1239, when the Lordship of Groomsbridge was granted to William Russell. William and his wife Haweis built a small moated castle at Groombridge, and, later that year, were granted a charter by Henry III of England to build a chantry. When William died in 1261, lordship was granted to Henry de Cobham, 1st Baron Cobham, heir of the influential Kentish family, the de Cobhams.

"By the mid 14th century, the lands were held by Sir John de Clinton, whose grandson, Lord Clinton and Saye, sold Groomsbridge to Thomas Waller of Lamberhurst c.1400. Here legend has it, his descendant, Sir Richard Waller, detained Charles, Duke of Orléans, as his prisoner (following the Battle of Agincourt) for many years, until he was taken to the Tower of London. The Wallers held Groombridge Place for over two centuries until it was sold in the seventeenth century.

"In 1604, the estate was purchased by Sir Thomas Sackville, 1st Earl of Dorset the Lord Treasurer of England. Sir Thomas also built a number of houses in the town of Groombridge. In 1618, Richard Sackville, 3rd Earl of Dorset had to sell Groombridge to John Packer due to gambling debts. Packer was deeply religious, and contributed mainly to the construction of nearby St. Charles' (now St. John's) Church." [2]

John Packer's son, Philip inherited the estate and, in 1662, built the present day house with the help of his friend Christopher Wren. Philip Packer (1618-1686) had a large family, and was very well connected, counting amongst his friends many influential and known figures of the time including Samuel Pepys, Christopher Wren and John Evelyn[3]. He was an original Fellow of the Royal Society [4].

John Philip Packer (1655 - 1697) inherited the estate, and passed it on to his son Philip in 1697. However, after marrying an heiress in a failed attempt to resolve his financial problems, Philip Packer died, and the estate was vested in the Chancery. [5]

"Groombridge Place lay empty for twenty years. During that time, the infamous Groombridge Gang began smuggling. Several times, dragoons were called to restore order in Groombridge. One persistent legend which dates back to that time is that of a tunnel between the cellars at Groombridge Place and those of the nearby Crown Inn, although no such tunnel has ever been found.

"Though Groombridge Place has remained largely untouched since it was built over 350 years ago, the manor has undergone its share of restoration. In the 1920s, electricity and bathrooms were installed. In 1986, the roof timbers and the chimneys were rebuilt to their original design, as heavy growth of ivy had damaged them. The house itself is a private home and is not open to the public, although the gardens are."[6]

Proper citations to follow Architectural and archaeological study from 1992 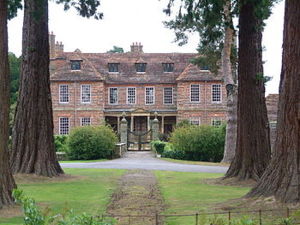