Royal Navy Ship HMS Titania (Pennant F32) was a submarine depot ship, built on the Clyde and launched on 4th March 1915. She was built originally as a merchant ship for the Royal Hungarian Sea Navigation Company "Adria" as Károly Ferencz József but was soon taken by the Royal Navy and recommissioned as a submarine depot ship. She saw service in both the First and Second World Wars. In the 1920s she was the depot ship for the 4th Submarine Flotilla and was based in Hong Kong. In Jun 1929 HMS Medway was commissioned as the depot ship for the 4th Submarine Flotilla. She sailed to Hong Kong and replaced HMS Titania in the role. HMS Titania returned to England. She was scrapped in 1949 at Faslane.

Chronology and Voyages of HMS Titania

When she was first commissioned, in November 1915, she was stationed at Blyth[5] and under the command of Captain Stanley Lyte Willis.

In December 1915, the Eleventh Flotilla became the first directly supporting the submarines of the Grand Fleet. The Flotilla was formed at first from submarines D7 and D8 taken from the Eighth Flotilla and HMS Titania as their depot ship. During the period in which Titania was the depot ship of the 11th Submarine Flotilla, other ships shared the role at various times, including HMS Mastiff (1914), HMS Talisman, HMS Trident (1915), HMS Tartar and HMS Moon. Other submarines of the G and J classes joined the Flotilla and the D-class submarines were removed.

On 3rd June 1916, following the Battle of Jutland, HMS Titania instructed submarine G10 to locate and sink floating remains of HMS Invincible to prevent the capture of materials[7].

On 28 October 1918, Captain Frederick Avenel Sommerville was put in command of HMS Titania and made Commander (S) of the 11th Submarine Flotilla based at Blyth.

The Eleventh Flotilla was disbanded in March 1919.

Formation of the Flotilla

HMS Ambrose (1903), under the command of Cecil Talbot, left Devonport in September 1919 and sailed to Hong Kong, where she remained until 28 March 1928[9]. The exact timing of HMS Ambrose's voyage to Hong Kong is not known. It appears that her arrival in Hong Kong was in January 1920[10].

On 18 February 1920 she and part of the 4th Submarine Flotilla, consisting of 7 L-class submarines, under the command of Captain Frederick Avenil Sommerville, set sail for Hong Kong via Port Said, Suez, Ismailia, Aden, Colombo, Penang and Singapore. She arrived in Hong Kong on 14 April 1920. The ship's log records that HMS Titania weighed anchor and secured to Storm Signal Buoy at 10.17 a.m. on 14 April 1920. Gap Rock Light referred to in the Log is in the Wanshan Archipelago, to the south of Hong_Kong_Island. The reference to Waglan Light shows that she entered Hong Kong Harbour from the east through Tathong Channel and passed by the fishing village of Lye Mun (Lei Yue Mun) in Kowloon before docking. The exact location of Storm Signal Buoy is uncertain. It is likely to have been in the Admiralty area of Hong Kong Island, at the HMS Tamar shore station.

In her time as the Depot Ship for the 4th Submarine Flotilla, she sailed to many destinations around the South China Sea and the East China Sea.

While HMS Titania was based in Hong Kong, another submarine depot ship, HMS Ambrose (1903) , accompanied HMS Titania in supporting the 4th Submarine Flotilla. The exact timing of HMS Ambrose's voyage to Hong Kong is not known.

The submarines of the 4th Flotilla that accompanied HMS Titania and HMS Ambrose are identified on the britsub.x10.mx website[11]. They were all of the L-Class.

Seven submarines accompanied HMS Titania on the voyage to Hong Kong. Submarines mentioned in the Ship's Log are L2, L5, L6, L8, L19, L20 and L33. The names of the commanders are those who were in command in 1920. The submarines were as follows:

A further six submarines were assigned to HMS Ambrose:

Voyages in the Far East

The Ship's Log for the period 1919 to 1924[15] shows that HMS Titania was based at Hong Kong on many occasions. When away from Hong Kong the destinations were mostly along the Chinese coast, Shanghai, Wei Hai Wei and others, as well as Port Hamilton. Wei Hai Wei was a colony leased from China in 1898[16]. Other foreign concessions were at T'ientsin (Tianjin)[17], Hangkow (Hankou)[18], Amoy (Xiamen)[19] and Shanghai.

Return to England, Replacement in Hong Kong by HMS Medway (1928)

At the end of her service in Hong Kong, she returned to the UK via Malta. HMS Ambrose had already left Hong Kong on 28 March 1928 and returned to England. HMS Medway took her place in Hong Kong as the depot ship for the 4th Submarine Flotilla.

A report in the Singapore Free Press and Mercantile Advertiser on 27 July 1929 notes that HMS Medway is undergoing trials.

NEW SUBMARINE DEPOT SHIP. "A Floating Base." The trials have now been begun of H.M.S. Medway, which has been built by Vickers Armstrongs, Limited, at their Barrow works to fulfil an urgent need for a larger and better-equipped submarine depot and repair ship. The Medway will take the place of the Maidstone, built in 1912 and employed throughout the late War as parent ship of the flotilla working from Harwich. In her design and equipment there have been introduced many novel features as a result of experience gained during and since the War. Her resources and accommodation are such as to make her probably the most spacious and efficient vessel of her kind in any navy, and it is no exaggeration to call her a floating submarine base.

A report in the Straits Times on 3 October 1929[22] mentions HMS Titania and HMS Marazion (1919). It appears that Marazion was serving with the 4th Flotilla, filling the void left by the departure of HMS Ambrose. Note: submarines L23 and L27, mentioned in the article, were not present when Ambrose and Titania sailed to Hong Kong in 1920. It is not known when they arrived in Hong Kong.

CHINA SQUADRON. SHIPPING NOTES. Ships Beginning to Return to Hong Kong. H.M. Ships on the China station, which have been spending the summer at Weihaiwei and other Northern ports, are returning to Hong Kong, their winter headquarters. H.M.S. Bruce, the leader of the 8th Destroyer Flotilla, arrived on Sept. 26 and is now at the Dockyard, north arm. H.M.S. Sterling, another of the units is also at the north arm. H.M.S. Seraph and H.M.S. Serapis are in the basin. H.M.S. Sepoy, Somme, Sirdar and Thracian were due on Sept. 26. The eighth unit, H.M.S. Stormcloud is out on an exercise cruise. The submarines of the 4th flotilla with H.M.S. Titania (depot ship) and H.M.S. Marazion (tender) were also due on Sept. 25 and include the L3, L15, L23 and L27. The cruiser H.M.S. Berwick is at the No. 1 buoy, Naval anchorage.

A newspaper report in the Straits Times on 11 February 1930 notes the arrival of Titania back in England. It read as follows:

SUBMARINES FROM CHINA. H.M.S. Titania, Commander A. B. Lockhart, D.S.C., which on her arrival home from China with submarines of the Fourth Flotilla, was ordered to relieve H.M.S. Vulcan, depot ship of the Sixth Flotilla, Portland. She will retain her seagoing status. Of the six submarines returning with her, one will be retained in full commission to relieve H34 in the Fifth Flotilla. Submarine L3, completed in 1918, will be scrapped. The remaining four submarines will be reduced to reserve at Fort Blockhouse.

HMS Medway took her place in Hong Kong as the depot ship for the 4th Submarine Flotilla. HMS Medway sailed to Hong Kong with six O-Class submarines of the Odin group. They were:

On 1 Oct 1930 she was commissioned at Chatham for the 6th Submarine Flotilla based at Weymouth/Portland.

16 Jul 1935 Flagship of the Flag Officer Commanding Submarines at the Silver Jubilee Review at Spithead, under the command of Cdr. Edward A. Aylmer, RN.

20 May 1937 Coronation Review at Spithead as Flag Officer Submarines' Flagship.

In 1940 she was refitted on the Tyne and transferred to Holy Loch for the remainder of the war.

In 1943 she served as a depot ship in sea trials of the Welman mini-submarine.

In 1945 she was transferred to Portsmouth Naval Base to serve as a depot hulk for the 5th Flotilla.

Officers and Crew of HMS Titania 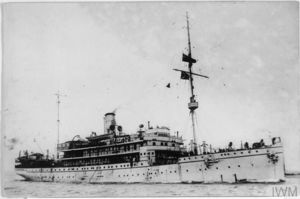