The county is named for Dr. Lyman Hall, a signer of the Declaration of Independence and governor of Georgia as both colony and state.[1]

Because of the discovery of gold in Lumpkin and White Counties in 1829, Gainesville, the county seat of Hall County, grew quickly to 'a frontier boom town as settlers flocked to homesteads in the rolling hills formerly inhabited by Cherokee Indians'. It was the trading and supply center for both settlers and miners.[2]

Statement written by the census taker for the 1820 Hall County, Georgia census:

"It is bounded South Eastwardly, by Franklin, Jackson and Gwinnett Counties, for 27 1/2 miles; and southwardly by Gwinnett 11 3/4 miles; By the Indian Boundary line where the Chatahoochy is the line from the Gwinnett County line, to the mouth of the Chestatee; then cross the Chatachoochee, and up the said Chestatee Eighteen Miles; and North-Eastwardly by Habersham for twentynine and a half miles; Principal Waters are the Hutson, Grove [?]. also the North Fork, the Pond fork, the walnut Fork, and allens fork all branches is of the Ocone head in hall county; the Chatahooche runs twentyfive miles through the County, and receives several small tributary streems on each side The land is rich on the water course but generally poor on the ridges, the difficulties were very considerable that attended taking the census; in the first place, the inhabitants are very dispersed, in the second place the country being but lately settled, there are but few roads, in the third place great part of the Country are very Mountainous, and in Fourth place it was, except in the oldest settled parts difficult to get nourishment for either myself or horse, and often when got, had to pay very high, in the 5th place had often to travel a considerable distance through fields to get to the dwelling cabbins, often, and generally, drenched in dew, particularly in August and September; and often had to walk many miles where it was so steep that I could not ride, or even sit on my horse.

"In the whole respectfully submit my case to the Federal, or district Judge, hopeing that he will recommend such additional wages to the dollar per 100, as in his Judgment he may think proper. 25th of November 1820

"Jos McCulchen[?] assistant to the Marshal of the district of Georgia."

[The above statement was hand written and very difficult to read in some places so may not be as perfectly transcribed as one would wish.]

1805 Georgia Land Lottery, including some persons who resided in Hall County at one time or another.

The descendants of John "The Pastor" Wayne of Hall Co., GA 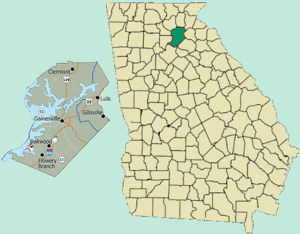 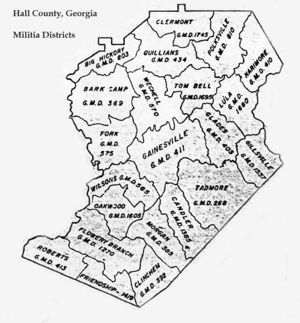