[send private message]
This page has been accessed 494 times.

Hardeman County was created in 1858 from Fannin County, re-created in 1876, organized in 1884. The county was named for pioneer brothers Bailey and Thomas Jones Hardeman. Quanah is the county seat.

SEE THESE FACEBOOK IMAGES of our Texas PANHANDLE PANHANDLE

1858 The county was created, county seat and largest city is Quanah. . It is named for two brothers, Bailey Hardeman and Thomas Jones Hardeman. [1]

16th and 17th Century Lipan Apaches dominated the area Wichita Indians settled along the Red River. .[2]
1700 the Comanches and Kiowas migrated to hunt buffalo and other game.

1870-1880 Cattle rustlilng was prevalent during Civil War and Reconstruction. Thieves crossed the Red River to Indian Territory.[2]
1880 population of Hardeman and Foard counties together totaled only fifty.[2]
1881 to 1884 Wilbarger County administered Hardeman County's legal affairs. [2]Margaret, first called Argurita, was the original county seat. [2]
1885 Fort Worth and Denver Railway made a survey of area, Quanah was laid out. [2]
1890 Election was held between Quanah and Margaret ( across the Pease River from other settlements and from the railroad).[2]
1890 if voter had lalundry done in a town for 6 weeks, this established residence!!![2]

Due to this rule the railroad crews were called citizens.[2]

1891 Foard County was formed from Hardeman, Cottle, King, and Knox counties, a division that left Margaret in Foard County.[2]

1875 to 1890 Hardeman County was principally a ranching area. Before construction of the railroad, cattlemen of the R2 Ranch, which covered 35 sq. mi of Hardeman County, and other ranchers drove their herds to Dodge City, Kansas. Cowboys picked up the Western (or Dodge City) Trail at Doan's Crossing of the Red River, near Vernon. [2]
1887 completion of railroad in 1887, Quanah emerged as an important shipping point for the surrounding area. [2]

1903 - St. Louis-San Francisco Railway built to Quanah from Oklahoma City, [2]
1910 the Quanah, Acme and Pacific Railroad opened a rail link fostered more new settlement, [2]
1920- 1930 # of tenants and sharecroppers grew. In contrast to many other areas of the state the majority of the tenants were white.[2]

1st Courthouse was Margaret no image[3]

3rd Courthouse , 1908 is current...It is Style - Beaux-Arts Built of Brick, with Texas Historical Landmark.The stately 1908 Courthouse reflects the pride felt by Hardemaners when they moved the County Seat from Margaret. Residence for voting was determined by where one had one's laundry done. It was a clean election. [3]

3rd Courthouse, 1908 - in Quanah Style - Beaux-Arts with a Brick material, is a Texas Historic

Texas Historic The stately 1908 Courthouse reflects the pride felt by Hardemaners when they moved the County Seat from Margaret. Residence for voting was determined by where one had one's laundry done. It was a clean election. [3]

North Texas (known as North Central Texas, Northeastern Texas ) is a distinct cultural and geographic area forming the central-northeastern section of the U.S. state of Texas. North Texas is generally considered to include the area south of Oklahoma, east of Abilene, and north of Waco. North Texas is the N of the eastern portion of Texas.[1]

Center is at 34°15' north latitude and 99°45' west longitude.
Railroad Burlington Northern and the Atchison, Topeka and Santa Fe railroads.
Size 688 square miles of grassy, rolling prairies.
Elevation 1,300 to 1,700 feet.
Rivers N 2/3 is drained by the Red River, forming the N boundary, S part is drained by the Pease River.
Soils range from red to brown, with loamy surface layers and clayey or loamy subsoils.
Prime Farmland 31 and 40% of the land in the county..

Vegetation is tall to medium-tall grasses and mesquite or shinnery oak trees. Climate is generally dry, with cool winters and hot summers.

Temperatures January from an average low of 24° F -52°, and in July from 72° to 98°.
Rainfall is 23 inches, the average annual snowfall is 7 inches.
Growing season averages 220 days a year, last freeze in late March and first freeze, November. https://tshaonline.org/handbook/online/articles/hch05

Hardeman County was one of 46 prohibition or entirely dry counties in the state of Texas until November 2006, when voters approved referendums to permit the legal sale of alcoholic beverages for on- and off-premises consumption.[1] 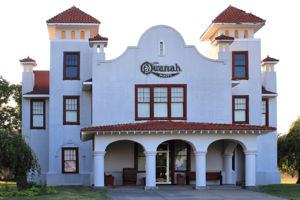 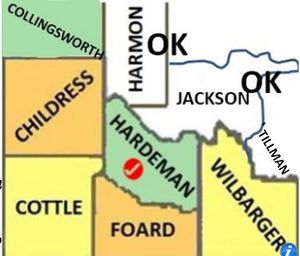 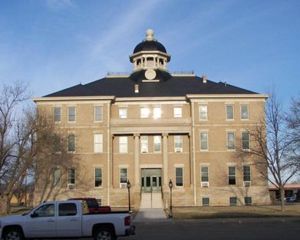