[send private message]
This page has been accessed 599 times.

Haverhill (Hay-Vrill) is a city located in Essex County, Massachusetts, and was established in the year 1640 and is known as "The Queen Slipper City". For centuries, the town was known for having played a role in every war on the continent from the French and Indian War to the American Civil War as the town's inhabitants were known to be abolitionists. In fact, Haverhill and nearby Newburyport were stops along the Underground Railroad.

By the time the Industrial Revolution came to American shores, the town along the Merrimack River blossomed into a city as immigrants from all over the world settled and worked in factories. The city, like others in the Merrimack Valley, became home to people seeking a better life for themselves and their families. As a result, whole neighborhoods dedicated to one ethnicity or another were formed.

Today, Haverhill remains one of the largest cities in the Merrimack Valley. This one place study will highlight the residents of the city from its founding to its industrious immigrants who all played a pivotal role in turning a small town into what it eventually became--a multicultural home representing the entire world.

This chart illustrates how the town went from a farming community along the Merrimack River to the present day as seen in the US census. 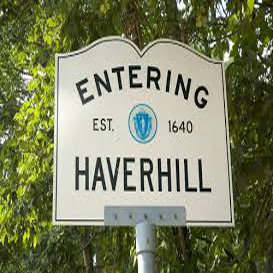