[send private message]
This page has been accessed 217 times.

Thirtieth Annual Session
The Department of Pennsylvania,
Grand Army of the Republic
Held at Chambersburg,
June 3-4, 1896

At this meeting, this beautiful tribute book was prepared and presented to Comrade Henry Harrison Cumings. This document was shared from the private collection of P. Hill and used with permission. 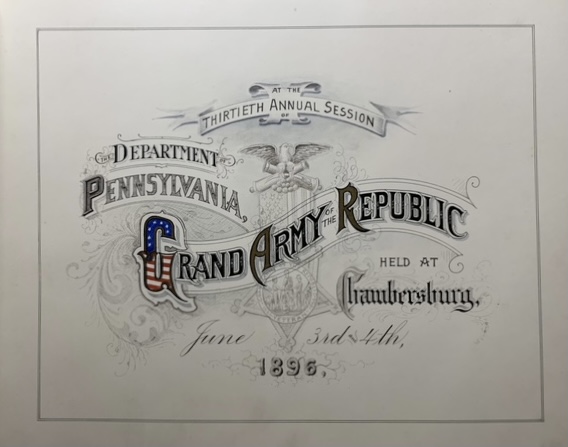 Thirtieth Annual Session, The Department of Pennsylvania, Grand Army of the Republic held at Chambersburg, June 3-4, 1896 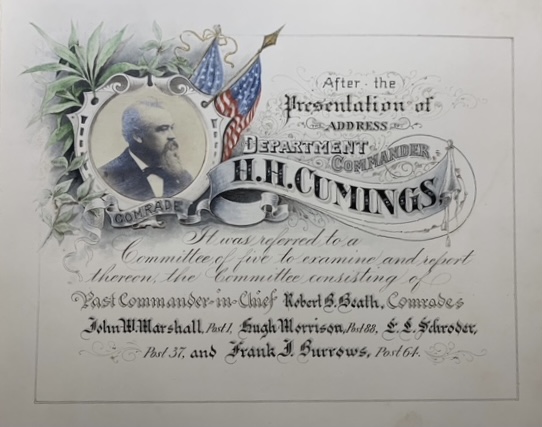 After the Presentation of the Address of Department Commander H. H. Cumings, It was referred to a Committee of five to examine and report thereon, the committee consisting of Past Commander-in-Chief Robert B. Beath, Comrades John W. Marshall, Post 1, Hugh Morrison, Post 88, E. L. Schroeder, Post 37, and Frank J. Burrows, Post 64. 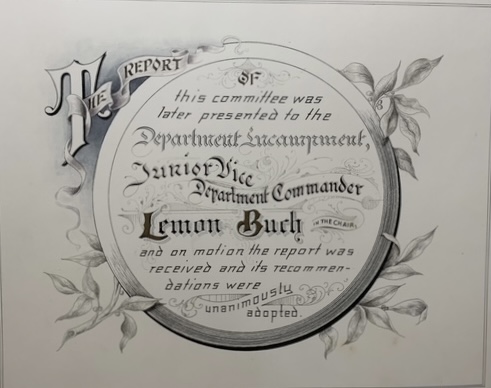 The report of this committee was later presented to the Department Encampment, Jurior Vice Department Commander, Lemon Buch, in the chair, and on motion the report was received and its recommendation were unanimously adopted. 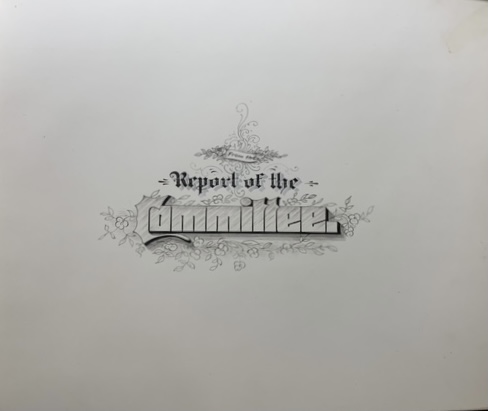 Report of the Committee 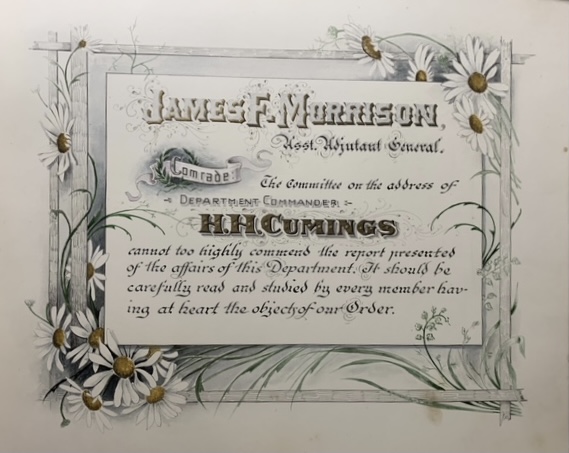 James F. Morrison, Comrade, Asst. Adjutant, The Committee on the address of Department Commander H. H. Cumings cannot too highly commend the report presented of the affairs of this Department. It should be carefully read and studied by every member having at heart the object of our Order. 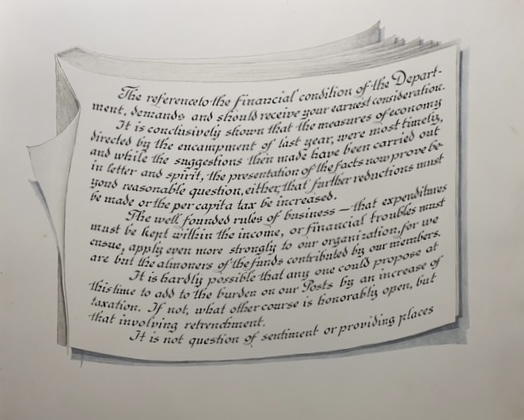 The reference to the financial condition of the Department, demands and should receive your earnest consideration.

It is conclusively shown that the measures of economy directed by the encampment of last year, were most timely, and while the suggestions then made have been carried out in letter and spirit, the presentation of the facts now prove beyond reasonable question, either, that further reductions must be made or the per capita tax be increased.

The well founded rules of business — that expenditures must be kept within the income, or financial troubles must ensue, apply even more strongly to our organization, for we are but almoners of the funds contributed by our members.

It is hardly possible that any one could propose at this time to add to the burden on our Posts by an increase of taxation. If not, what other course is honorably open, but that involving retrenchment.

It is not question of sentiment or providing places 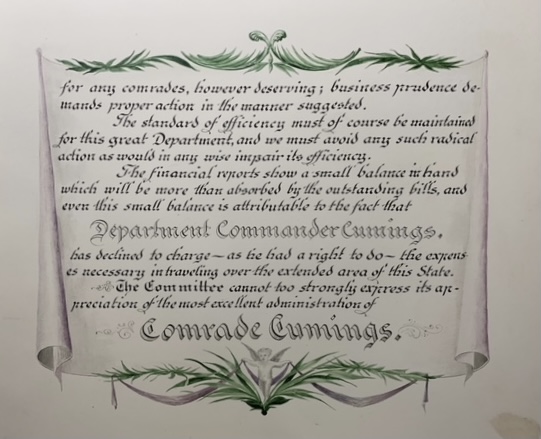 For any comrades, however deserving; business prudence demands proper action in the manner suggested.

The standard of efficiency must of course be maintained for this great Department and we must avoid any such radical action as would in any way impair its efficiency.

Has declined to charge — as he had a right to do — the expense as necessary and traveling over the extended area of the state. The Committee cannot too strongly express its appreciation of the most excellent Administration of 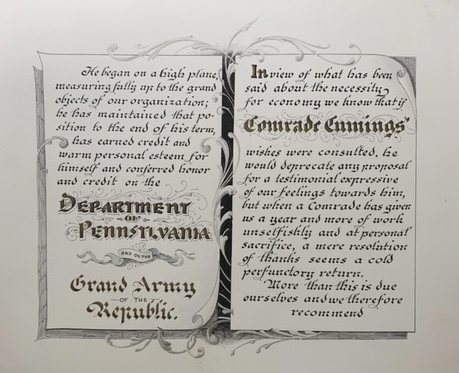 He began on a high plane, measuring fully up to the grand objects of our organization; he has maintained that position to the end of his term, has earned credit and warm personal esteem for himself and conferred honor and credit on the Department of Pennsylvania and to the Grand Army of the Republic.

In view of what has been said about the necessity for economy we know that if Comrade Cumings wishes were consulted he would deprecate any proposal for a testimonial expressive of our feelings towards him, but when a Comrade and has given us a year and more of work unselfishly and our personal sacrifice, a mere resolution of thanks seems a cold perfunctory return.

More than this is due ourselves and we therefore recommend 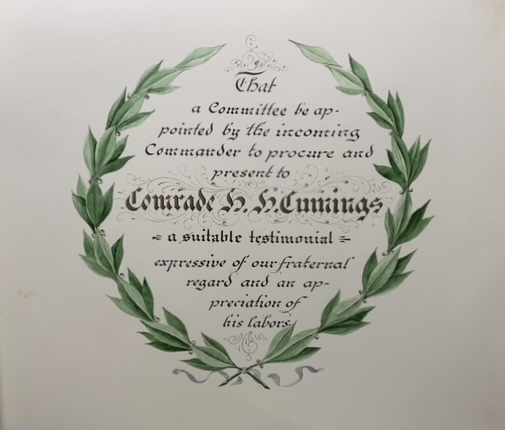 That a Committee be appointed by the incoming Commander to procure and present to Comrade H. H. Cumings a suitable testimonial expressive of our fraternal regard and appreciation of his labors. 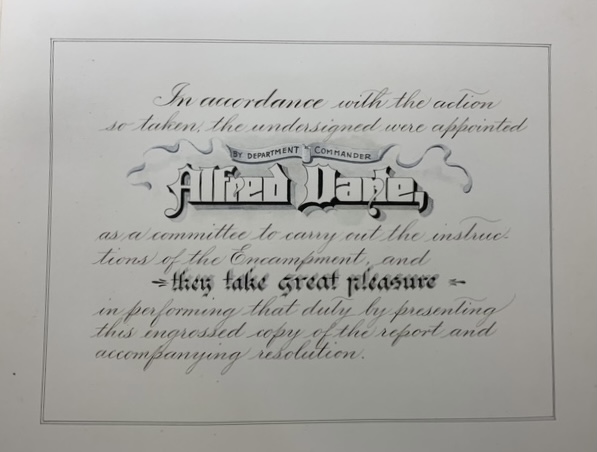 In accordance with the action so taken the undersigned were appointed by Department Commander Alfred Darte as a committee to carry out the instructions of the Encampment and they take great pleasure in performing their duty by presenting this engrossed copy of the report and accompanying resolution. 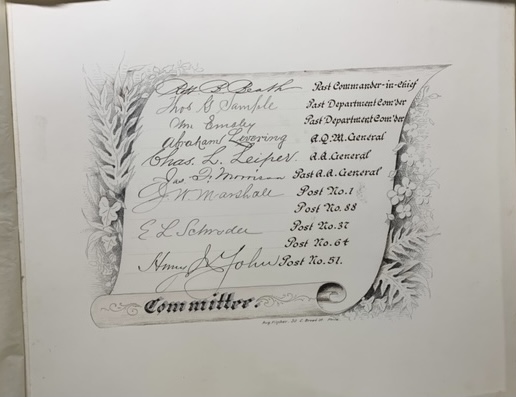 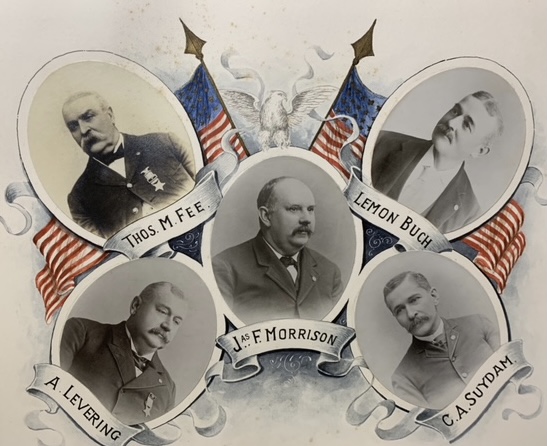 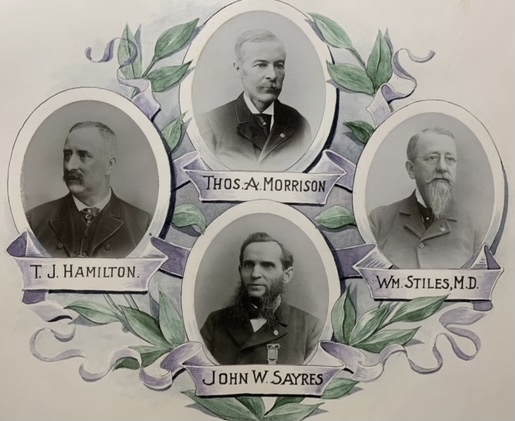 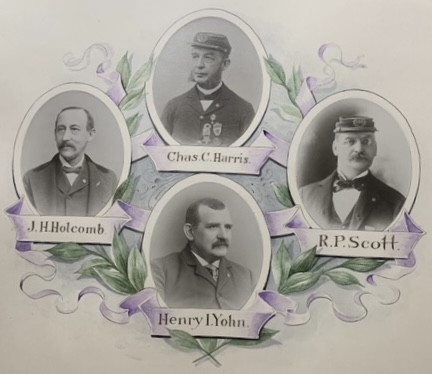 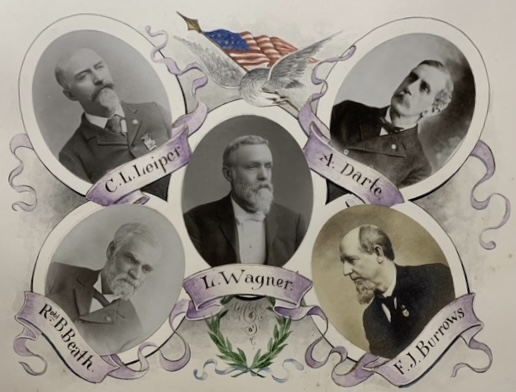 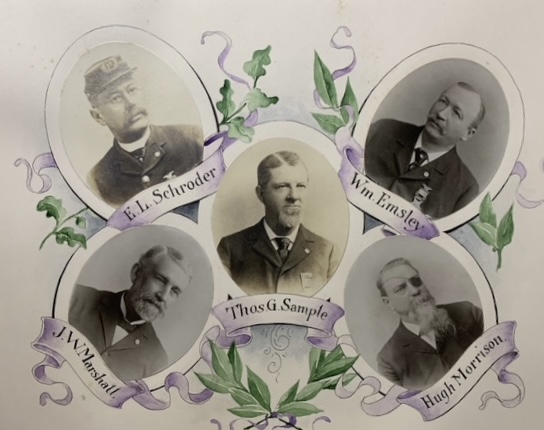 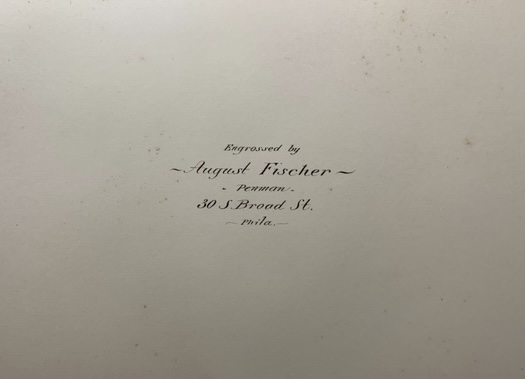 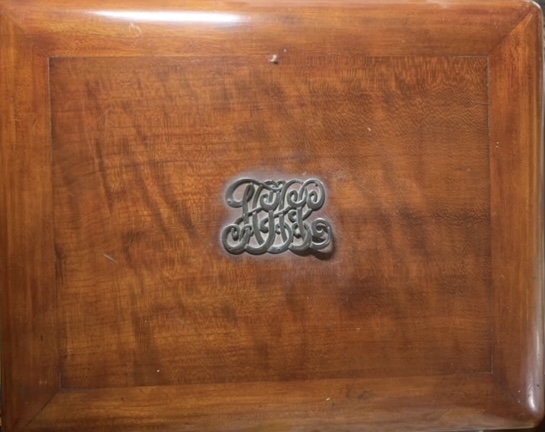 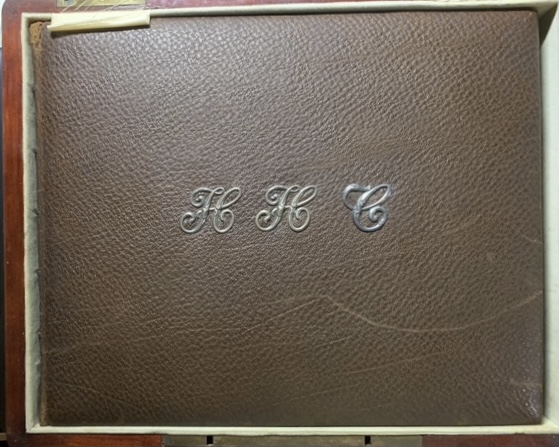 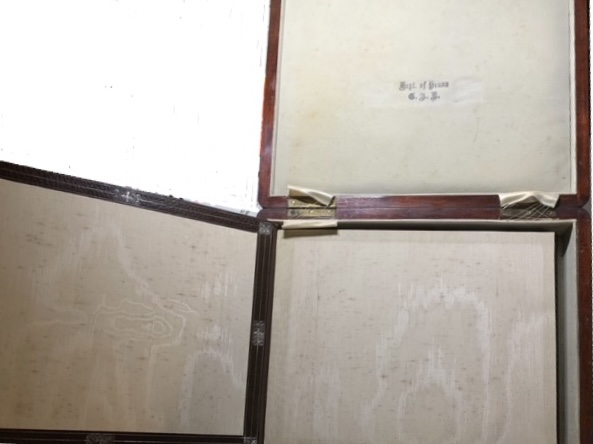 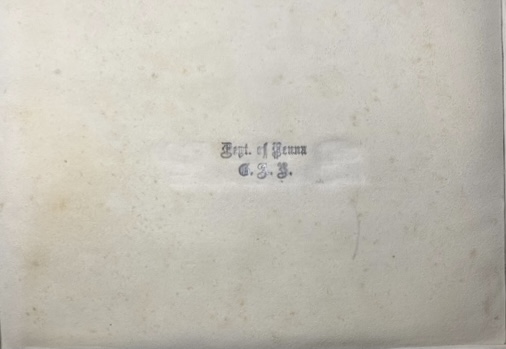 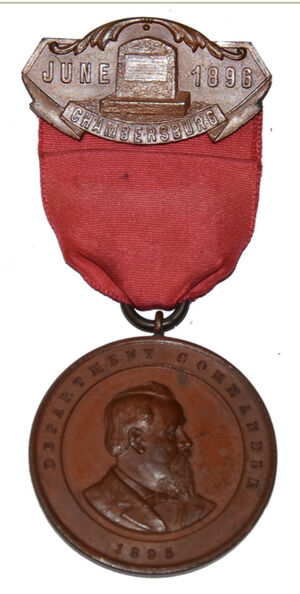 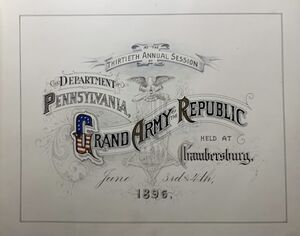 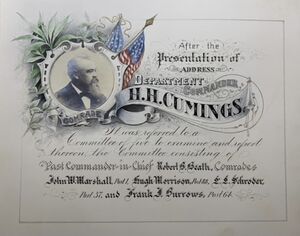 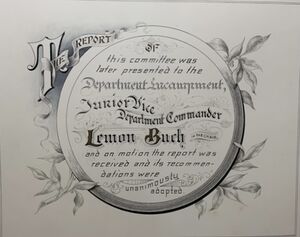 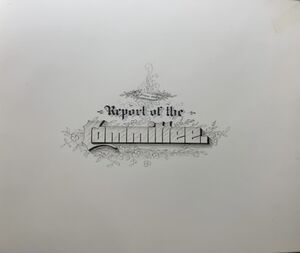 Bernard Ellis
Cathryn and Peggy, thanks for surfacing this for all to appreciate. The quality of the photos is great! Since HHC seemed to control the purse strings, I guess his comrades took a separate collection for this, especially noteworthy before the age of Venmo and GoFundMe! There might have been a national template that was followed, but still seemed to be a very personal recognition that someone had to curate. Peggy, back working full time, but my brother Pierre and second cousin Celia still intend to do a Tdioute/Oberlin/Cleveland field trip. On the agenda will be to check out the historical assn that has HHC’s papers I told you about, and we can further assess if it’s a worthy place for you to bequeath it, so you can feel good about it rather than just by default. My sister has their original marriage certificate which we’ll definitely deposit there. I’ll scan here first of course. Happy Holidays! Bernard
posted Dec 04, 2021 by Bernard Ellis