[send private message]
This page has been accessed 1,440 times.

can be reformatted to

Request for permission to use image from Findagrave.com. I am wondering if I may have your permission to use the photograph of the gravestone of Sarah Catherine (Baker) Layman (1792 - 1868) at https://www.findagrave.com/cgi-bin/fg.cgi?page=gr&GRid=84110423 on her profile at Wikitree, which you can find at Baker-13981 I have already added the photograph so that you can see what it will look like, but it is simple enough to remove (or to change the credits). Thank you, Patricia Prickett Hickin Prickett-120

Lots of first-hand info but not documented, no bib, no index. Call Number: Mine

Official names of the Thirteen Colonies

For Wikipedia article on the Thirteen Colonies, click here.

This card file lists all verifiable adult males in the Holston-Clinch River area in the last quarter of the eighteenth century, as well as information on early East Tennessee settlers. There are more than 4,000 entries which, in most cases, indicate birth and death dates, marriage information, children, abstract of will, and other biographical information if available. Information is sometimes continued on a second card. Sources are noted. General arrangement is alphabetical by last name.

Another card file includes a partial list of those present at the Battle of King's Mountain (1780) and lists of ministers (with genealogical information), mills, forts, and miscellaneous notes.

I used it at at the Botetourt Court House Clerk's Office when it was a notebook -- a one-of-a-kind thing . There is now a published version: Author Burton, Charles T. Title Botetourt County, Virginia, death records / collected by Charles T. Burton, transcribed by "Babe" Waskey Fowler. Publication [Roanoke, Va. : V.W. Fowler], 1995. There are no page #s in either version. Call Number: Virginia Room 929.3755 B657dt.

But when I entered the aforesaid URL what I got was as follows:

"Would very much appreciate any information on the descendants of Hans George Jerrick Houk and Juliana Sophia Vishering Schwartz. Hans was born in Messel, Hesse Darmstadt, Germany on September 4, 1704 to Hans and Barbara Houk. Juliana was born ca. 1705 to Christian Vishering and ? Caritas. Hans and Juliana’s children were George and Sophia. Sophia married Christian Gish in 1754 in Pennsylvania[.] Juliana’s mother died in Pennsylvania. Juliana also had a sister Elizabeth and a brother Christian."

"The information provided here is the result of collaborative work of genealogists associated with the Ranck Family Heritage Society. Any republication or commercial use of this information is expressly prohibited; private use is permitted but all such use MUST contain the following citation: 'The Ranks of the Rancks (on-line edition, December 9, 2017 ), Ranck Family Heritage Society, Inc. (http://Ranck.org).' "

There are two copies online: At Hathitrust.org and Heritagequestonline.com but neither has any kind of index.

A very amateurish and poorly organized production, but the author tries very hard to be as accurate as possible. Not good at being specific in citing sources. Many careless mistakes with spelling, punctuation, and the like. pph20080311-1935 Call Number: 929.2 Sn92 H.A.G.S.

from the Mathias Snider Bible Snider, Matthias; Richard R. Weber, transcr. Publication: FOBG Newsletter, vol 28#2, Summer 1996. 16 Sep 2007-8 May 2016 Fellowship of Brethren Genealogists NEWSLETTER, Vol. 28 No. 2. Spring [sic., i.e., Summer] 1996
TRANSCRIPTION FROM THE MATHIAS SNIDER BIBLE [Publication info in German] Christoph Saur 1776 Inside front cover: 1757 October 30 was I Mathias Snider borne in Barcks County in Bame Township State of Pensilvania Eight Meilles from Reading 1757 January 26" Was My weife Elisabeath borne in the Falckemer Shwamp thirty Meiles frome the City of Philadelphia 1779 Fabruary th2dd We Got Married in North Carolina in Roan County 1779 October th31d My sone Henry was born was borne in Roan County 1781 July th31 Jacob was borne in the same County 1783 March John was borne in the same County 1784 Aprill th18d Day we Came from North Carroleina to Bottitourt County into the State of Virginia 1785 March th2d Catharina was borne in Bottitourt County Virginia 1787 June th1d Elisabeth was Borne in the same County 1795 October th17d my weife was Bapteised at a Big Meting at Kinssis 1796 January th22d Sussanah was borne in Bottitourt County the Month of FEBRUARY March I was choesen By the Breathren for to speak the Word of God in bubliok Meeting Mungst the Breatreen 1800 in April Henry Got Married [27 Mar 1800 to Susanna BRITZ in Botetourt Co] 1801 in October Caddy Got Married [28 Oct 1801 to John STO VER in Botetourt Co] 1807 April the 2th John got Married [to Hannah NOFSINGER in Boterourt Co] 1807 May the 10th Henry got Married the second time [Botetourt Co DB 12:42 shows to Kitty ____] l807 Elizabeth was Married Aug at the 13th [to Jacob NOFSINGER in Botetourt Co] Deaths Jacob Snider died March I 1th 1854 [overwritten, may be 1852] Inside back cover: Mathias Snyder his holy Bible July the 24 - 1805 1806 May the 16th Mary Brugh was Borne & Bound to us at the September court 1810 Deaths Matt Snider . . . E . . . Deaths [These are a very old repetition of the preceding faded entries] Mathias Snider departed this in the year of our Lord February 20th 1836 Elisabeth S[ni]der departed this life in the year of Lord May 4th 1842 Loose scraps of paper in same Bible: Jacob Nofsinger was born the 11th day of November 1782 died the 21st day of January 1873 Elizabeth Nofsinger was born the 1st day of June 1787 died the 9th day of August 1869 Nanie Elizabeth Nofsinger was Bom January the 7 1869 Daughter of Mathias and Mary M. Nofsinger [All spelling as in original] Richard R. Weber, 10715 Moosberger Ct. Columbia, MD 21044 2d 31d 30d th31d th2dd Note: Actually, there's an error in the newsletter and it SAYS "Spring 1996" in the heading on page 34, but that's an error per the Brethren archival intern in Elgin. Summer 1996. 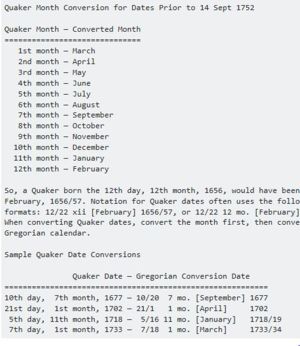 Map of Virginia counties and cities with formation information