[send private message]
This page has been accessed 706 times.

This page is maintained by the Ontario Team, part of the Canada Project.

Sault Ste. Marie, located on the St. Mary’s River in Ontario, Canada, is the seat of the Algoma District and one of the oldest French settlements in North America. It is the third largest city in Northern Ontario after Sudbury and Thunder Bay.

The following lists those individuals who were residing on the North Bank of the St. Mary's River, or were in possession of land there, at the time of surveyor Alexander Vidal's visit to Sault Ste. Marie, Ontario. This list, dated May 18, 1846, is considered to be the earliest known census for the community. 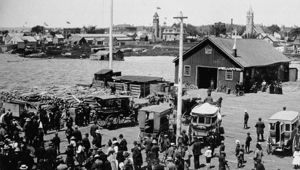