[send private message]
This page has been accessed 1,262 times.

Bears an important Luzerne county family name. The Delaware and Shawnee Indians had their camps and wigwams near the mouth of Wapwallopen creek. Stewart Pearce thinks that the Indian "grasshopper war" between the two tribes occurred near the mouth of the creek. One papoose had caught a grasshopper to eat—the squaws and children were of the two tribes in this vicinity—and when another papoose snatched the grasshopper and swallowed it, the squaws took up the matter and the bucks were called to the field of gore by the hair pulling and screams of the women and the fuia grew fast and furious.

In 1870 Hollenback had a population of 1,303, which was reduced to 736 in 1880 by taking off the north half of the township and making Conyngham township; in the census of 1890 this was again slightly decreased, reporting a population of 724.

A few German farmers came up from Northampton township in 1789, and set about the hard task of reducing the rugged land and stubborn soil to domestication. In 1796 it contained but ten taxables, and at that time it was a part of Nescopeck and extended up to Newport township. In 1866 it contained six sawmills that were busy cutting lumber for the public markets.

Henry Whitebread, father of B. Whitebread, located in 1807 on the Tobias Hess farm, about a mile South of Hobbie. Other settlers came in that and the succeeding year, including John Bachman, who located on the M. Fox place, in Hobbie. Abram Shortz located where John Hart lives, two miles southwest of Hobbie, and John Balliett where Mr. Chipple lived, in the southeast part of the township. Mr. Balliett (who was the first blacksmith in the township) came from Switzerland, hence the name "Switze Hill" for that portion of the township. David Eroch located near the Ballietts, on the "Switze."

The first sawmill was built by a Mr. Craig, on the Shortz place, and went to decay long ago. The pioneer gristmill was built on the Big Wapwallopen, near the site of the upper works of the Dupont Powder mills. The first and only tannery was built by Samuel Snyder, on the creek where J. Harter lived. Both mill and tannery have now gone to decay. The first store was opened about 1825, by Amasa Shoemaker, near John Fox's. The first tavern was opened in what is now Hobbie about 1825, by Peter Goode. John Harter built the first frame house in 1848. Bernard Whitebread, now living half a mile southeast of Hobbie, assisted in raising the frame. The first postmaster was Henry Gruver. He was appointed in 1852, and kept the office where was Grover's store, in the village of Hobbie. The first road laid out was the one running down the creek from Hobbie to Berwick. The pioneer horticulturist was Henry Whitebread. He set out an orchard in 1808. He brought the trees from his old home at Holmesburg, on the Pennypack creek, eight miles below Philadelphia. David Bachman set out an orchard on his place the following year.

Hobbie is a postoffice nearly in the center of the township, originally owned by Peter Goode and settled first in 1815. Nathan Beach bought of Goode and he had it laid off in lots and sold some of them. In the place are two stores, a hotel and blacksmith shop. History of Luzerne County Pennsylvania; H. C. Bradsby, Editor 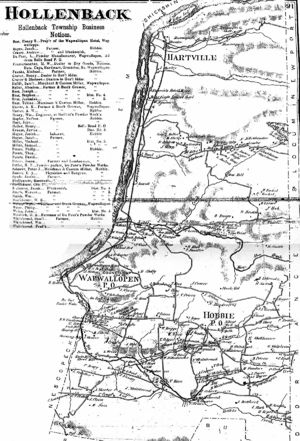