[send private message]
This page has been accessed 692 times.

Hollywood Cemetery is a large, sprawling cemetery located at 412 South Cherry Street in Richmond, Virginia. Characterized by rolling hills and winding paths overlooking the James River, it is the resting place of two United States Presidents, James Monroe and John Tyler, as well as the only Confederate States President, Jefferson Davis. It is also the resting place of 25 Confederate generals, more than any other cemetery in the country. Included are George Pickett and J.E.B. Stuart.

(sorted in order of demise)

Hollywood Cemetery on Find a Grave 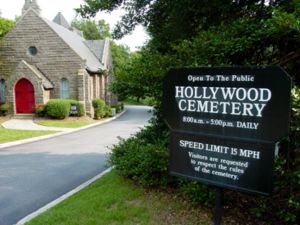 Would you please change the Category: Virginia Cemeteries

Thanks!, Much appreciated. Vic

Nae (Lockhart) X
Would you add the category: Richmond, Virginia, Cemeteries to this page? Thanks! Much appreciated.
posted Feb 17, 2014 by Nae (Lockhart) X