First recorded in the Domesday Book: See the attached photo of the Great Domesday Book Folio: 286r. "Editions Alecto Limited" has translated this to "HOLME PIERREPONT".

HOLME PIERREPONT is a township and parish, in a retired situation on the south bank of the river Trent, 125 miles from London, 2 from Ratcliffe station, 5 east from Nottingham, in the Southern division of the county, southern division of Bingham wapentake, Bingham union and county court district, rural deanery of Bingham No. 2, archdeaconry of Nottingham, and diocese of Lincoln. The church of St. Edmund is an old building, consisting of chancel, nave, south aisle, with a mortuary chapel at the south-east angle, and a massive western tower with spire; one window is Early English, and some of the work is Perpendicular, but most of it is a rare example of the Debased period; in the churchyard, near the south-east church wall is the monument, dated 1802, of a French refugee named "Dort de la Borde, of Mervelle and Chessy", driven from the "once flourishing kingdom of France" by the troubles of the first Revolution: the 3 old bells were destroyed by fire in 1877, there are now 5 re-cast in 1878: there are two ancient marble incised slabs now underneath the tower, originally in the chancel; on one, the emblems of a priest are distlnguishable; the names and dates are almost obliterated: in the south aisle are two recumbent figures on the floor, without inscriptions, one in chain-mail, mutilated, but finely cut, the other perhaps a century later; besides these, there is a series of memorials dating from the 16th century onwards; good examples of their several styles, illustrating the transition from mediaeval to modern history as well as showing the connection of the Pierreponts with other noble lines, their acquirement of the earldom Kingston (subsequently raised to a dukedom) and their loyalty to King Charles during the Civil war; on the pillar near the font is a tablet erected in memory of the poet Oldham, by one of the earls of Kingston in 1683; its ornamentation is particularly rich and good of its kind: the inscription (in Latin) refers to the poet's great merits and his patron's close attachment to him; it records (with mournful contrasts) how at the early age of thirty he was carried off by small pox, and "translated to the choir of Heaven":- "Variolis correptum Heu ! niis immatura mors rapuit et in coelestem transtulit chorum."
Within the chancel is a monument by Flaxman, in mem ory of a former rector of Cotgrave: there is a beautiful stained window at the east end, put in at the last restoration, and another (on the north side of the chancel), of some merit, put up originally by the present Earl Manvers in memory of his father in the east end, from whence it was removed on the enlargement of the chancel; during the last restoration, in 1878, a rood-loft staircase was discovered in the wall behind the present pulpit, as also some faded relics of fresco-inscription on the north wall which could not be preserved: the late restoration was carried out under the superintendence of Mr. T. C. Hine; the whole expense was borne by Earl Manvers. The register dates from the year 1549. The living is a rectorry, yearly calue, L542, with 36 acres of glebe and residence, in the figt of Earl Manvers and held by the Rev. Henry Seymour B.A. of Balliol Colleger, Oxford. There are some charities, amounting to L7 10 s yearly. Holme Pierrepont Hall is a large Gothic mansion, stand near the church: it is the seat of Earl Manvers, who is lord of the manor and sole landowner. The low grounds have a rich soil, and the upper parts are sand and clay. The chief crops are wheat, barley, oats and roots. The acreage is 2,131; rateable value, L4,543 17s. od.; the population in 1881 was 217. The parish consists of the townshop of Holme Pierrepont, and the hamlets of Adbolton, part of that Basingfield, and of Holme Lane, and par of Lamcote.

See stone effigy in http://st-edmunds.org.uk/ (no picture at this web site)

WikiTree Profiles that use this source 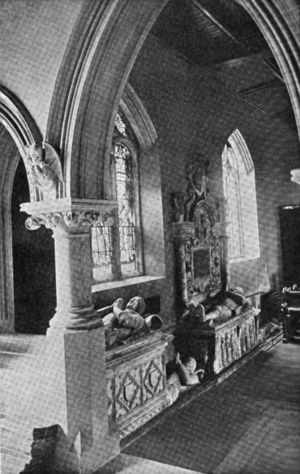 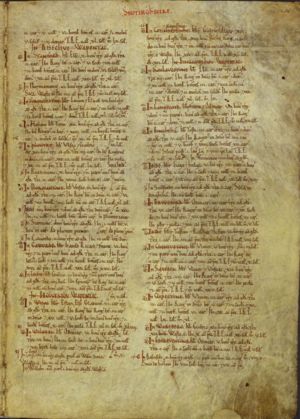 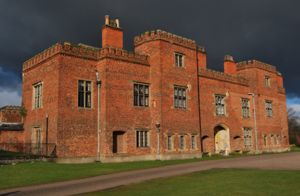