[send private message]
This page has been accessed 1,237 times.

The Hospital Cottages for Children was originally incorporated and opened in 1882 in Baldwinville, a village in the town of Templeton, Massachusetts. The children admitted to the hospital tended to come from one of the falling categories:

Children were given care for chronic but non-contagious illnesses and diseases, in a country environment. Care was free to those who could not pay and at a moderate price for others. Weekly fees ranged from 50 cents to $6. No child was ever refused admission if the hospital had room. Epileptics, which made up the largest population of the patients, were received in a separate department. [1]

In more recent years, the children who died while patients at the Cottages were remembered in a 17 year project led by Alan Mayo and his wife Stephanie. The children had been buried at Greenlawn Cemetery in Baldwinville, and the graves had only numbers. The Mayos led an effort to commemorate all 40 of the children buried there with headstones over their graves so they will not be forgotten.[2] The new markers were donated by Ann Reever, daughter of JoJo Kelliher, the last child to die at the Hospital Cottages in 1942.[3]

Lucius W. Baker, a Templeton native, was a young physician in the early 1880s. After completing training at Bellevue Hospital, he sought out to prove his belief that chronically ill and epileptic children would have a better chance if they were treated in fresh country air from a younger age. He was backed financially by several local businessmen and bought three neighboring house on Pleasant St. in Templeton, Massachusetts, in 1880. This became the first location of The Hospital Cottages for Children. It is believed to be the first facility in America that provided both medical care and schooling for the patients and the first to specialize in the treatment of epilepsy in children, as well.

In 1887, Baker resigned his position to open another institution in Templeton, this one devoted to helping those addicted to alcohol and opium. Everett Flood, M.D., previously of the Worcester Lunatic Hospital, became the new superintendent of the Hospital Cottages. 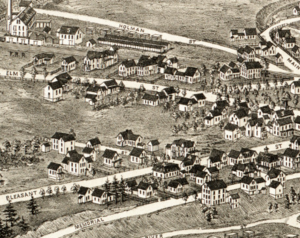 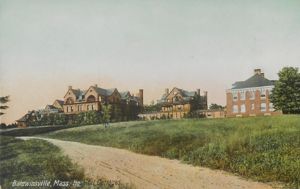 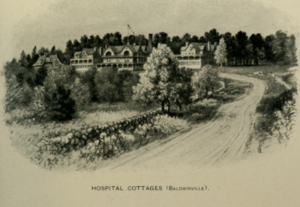 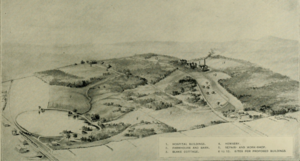