[send private message]
This page has been accessed 679 times.

When I became aware that there was a house still standing that my maternal great great grandfather, Norris S. Whitteker, had built in 1836, the very first thing I wanted to do was go see it. There were already photos on line from the present inhabitants, The West Virginia Humanities Council.

These pictures depicted the house before they restored it, during restoration, and after restoration, when they moved into it, using it for their offices. I wanted to visit it and take my own photos, though.

We did visit in 2006, taking our own photos. We were outside the house on a holiday there called "West Virginia Day". We did not expect anyone to be working that day as all of the other state offices were closed. However, as we were walking around the property, taking photos, I spied some movement inside the house. I knocked on the door and assured them that I was not a nut case; but the great great grand daughter of the man who had built the house. They graciously invited us in for a tour of the inside. It was the most wonderful feeling standing inside this house that Norris had built; and, I still remember it today as I look at the photos we took.

While in the house, I discovered a hand-carved table with a brass plate on it, stating that it had been contributed to the house by the Great Great Grandaughter of Norris S. Whitteker. Thanks to the West Virginia Humanities Council, I was put in touch with my third cousin, Carolyn Jones Halstead; and, we became fast friends. So, this house was a most amazing discovery for me and my children.

I would like to add to this a little background on the Whitteker brothers four of whom came to settle in the Charleston area between 1806-1810; William, Levi, Aaron, and Thomas. All had been taught by their father, William Whitteker of Princeton, Massachusetts to build houses. The old man, himself had built many in Princeton, some of which may still stand today.

When they came to Charleston, all of the brothers continued the family tradition of building homes. They bought up lots in town, built houses, then sold them. They did this in addition to owning and operating other businesses such as a saw mill and grocery (Thomas), hotel and grocery (Aaron), salt making (William & Levi). The houses were considered to be some of the best made houses in the area. Sadly, the MacFarland/Hubbard House is the only one that I know of in West Virginia still standing; but, there is still a photo of the Rand House which was built by Norris and his brother William F. Whitteker right next door (see photos).

In addition to houses, they also built several brick buildings which were used as stores. They had such a business going on in construction that they were writing to Massachusetts for workmen to come and help in their projects. I have several such letters written by William in my collection of his letters from 1797-1817, plus one letter I own, written by Levi to Boston, also requesting workmen.

Note: To see all photos of the house, be sure to scroll down toward the bottom; and, on the right hand side of the page, click on "view all". 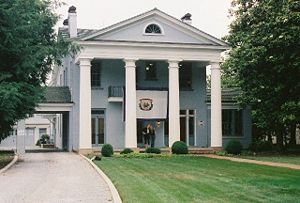 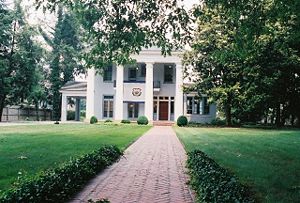 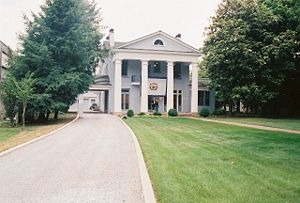 Parlor at the Front, Center of the House. 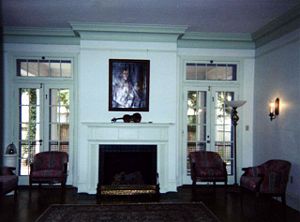 Cannon Ball which Lodged in the Roof of the House during the Civil War. 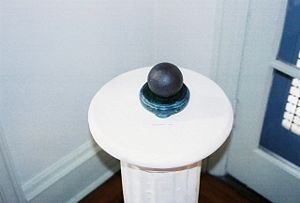