[send private message]
This page has been accessed 56 times.

The Dyckmans apparently could not make a profit on the tavern. They advertised and sold the tavern and associated 30 acres of land to Caleb Hyatt at auction on 30 Sept 1772, the sale closing on 11 Feb 1773.

Jacob and/or Caleb Hyatt made a go of it, even during the Revolutionary War: they served both sides as troops skirmished over this strategic location.

The tavern was still running strong in 1789, when it appears on Colles's road map of the Post Road from New York to Stratford. And George Washington is said to have stopped there that year for dinner, perhaps including a glass of rum.

(The advertisement for the auction sale read as follows. Real estate advertising standards have not changed much in the last 250 years, it seems.) “On Wednesday, the 3Oth Sept. next, at the same place, will be sold at public auction, that most excellent farm at King’s Bridge, now in the possession of Mr. Sampson Dyckman, and the meadows thereunto belonging, with the large house, barn, kitchen, and all other improvements; it has a very good garden and orchard, with the best of fruits, such as apples, pears, etc., and is the most frequented and noted house on this island for travelers who pass Prince’s Bridge. It has the advantage of mowing of a large quantity of salt hay, etc., and in the spring it abounds with most excellent bass, shad, and herring; crabs and oysters most part of the year are caught in great abundance ; in short, it is the most convenient spot for a tavern-keeper to make his fortune in a few years of any on this island. The purchaser may take possession the first of October next.")

Caleb Hyatt passed down the tavern-keeping and eventually the property to Jacob, who leased the tavern in 1809. The building was still there in 1911 as shown on a photograph on the myinwood page, shortly before it was demolished. 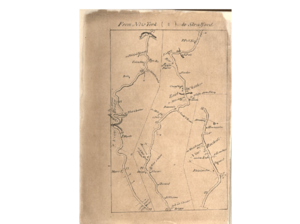