[send private message]
This page has been accessed 376 times.

"THOMAS GLASCOCK (1661-62, Richmond Co. - 1725-26, Fauquier Co.), lived on Farnham Creek about three miles north of Indian Banks. He was the grandson of Thomas and Jane Just Glascock, the son of Gregory Glascock (1634-44, England - 1690, VA) and the first cousin of Col. George Glascock of Indian Banks. Thomas married Sarah Stone in 1689 and their children were Gregory, John, Elizabeth, Thomas Jr., Sarah Stone and Peter Glascock. On 11/5/1723, for reasons unknown, Thomas stabbed to death one William Forrester. After the murder Glascock and his son Gregory, then 23, left in a small boat, but Gregory was put ashore about five miles below Morattico Creek and from there traveled as far as Norfolk before returning home. Upon his return he was named as an accessory to the murder; however, his testimony and that of his brothers resulted in his release. Thomas Glascock was never heard from again. Sarah Glascock remained with her children on Farnham Creek, but after her husband's indictment his property was confiscated and Robert "King" Carter took possession of his estate. Carter's 1726 will stated, "if my son John (Carter) comes to enjoy the said Glascock's lands under a good title that he then further consider the said Glascock's children in such proportion as he shall think fitt, or otherwise gratify them according to his discretion." Since both John and Peter Glascock settled on land owned by John Carter in Prince William County, it appears that Carter's son honored his father's request"

"The Simonson property was originally part of Indian Banks (circa 1699) and was bought at a price of $725 as a settlement to the Pitts family to cover costs of care from the Western Lunatic Asylum in 1878. Thomas Dobyns had granted this land to the freed slaves after acquiring Indian Banks from the Glasscock family in 1822.

The Glasscock family had re-acquired the property from Colonel Robert Carter after he showed compassion on the family by returning the property to the original owners after Thomas Glasscock's estate (Indian Banks) was confiscated because of Glasscock being indicted and outlawed for The murder of William Forrester in 1727." 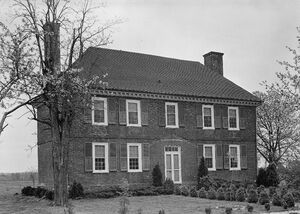