Iowa in The Great War

[send private message]
This page has been accessed 1,395 times.

Iowa in The Great War

The official records show that 114,242 Iowans served in the armed forces during WW I.

The Iowa National Guard and the 168th Infantry Regiment

Seventeen National Guard divisions were assigned to the AEF during World War I. One of the first National Guard divisions to reach France was the 42nd (Rainbow) Division. The 42nd Division was a composite division made up of soldiers from many states. It included Iowa’s 168th Infantry Regiment. Major General William Mann commanded the Division. Major, later General of the Army, Douglas MacArthur was his chief of staff. It was MacArthur who first suggested "Rainbow" as the Division’s name. The 168th Infantry was commanded, in turn, by Colonel Ernest Bennett and Colonel Matthew Tinley.

The 168th Infantry was a consolidated force made up of three prewar regiments of the Iowa National Guard infantry. It was the only Iowa National Guard unit to participate, intact, in the hostilities in France. Many other Iowa Guardsmen, most notably those serving in the 34th Division, were sent overseas. They were sent as replacements, however, and saw active service with the organizations to which they were assigned.

The 42nd Division saw its first action at Luneville in February of 1918. During the next ten months, the Division took part in engagements at Baccart, Esperance-Souaine, Champagne-Marne, Aisne-Marne, Essey-Pannes, and the final great Allied offensive at Meuse-Argonne.

The Champagne-Marne offensive was one of the most decisive battles of the World War I. Fought over a four-day period (July 15-18, 1918), it was a daring attempt by the German General Staff to drive a wedge between the British and the French and end the war before the bulk of American forces could arrive in France. Several American divisions already in France, including the 42nd, played an important role in stopping the German attack. As one soldier of the 168th wrote "By noon of July 15, the German offensive had been halted, but both sides maintained a terrific artillery duel until the 18th.

By October of 1918, the eve of the decisive Meuse-Argonne offensive, the 42nd Division had established a sterling reputation, not only among Allied commanders but among German commanders as well. On October 9, the Weekly Summary of Information of the German Group of Armies which held the front from the Argonne to the Meuse gave the following assessment: "The engagement of the 42nd Division is expected soon. World War I 168th Homecoming It is in splendid fighting condition and is counted among the best American divisions." (Reilly) This assessment proved to be correct. By the end of the war, the 42nd Division had reached Sedan. This was the northernmost point attained by the American First Army in its advance toward Germany.

Northwest of Des Moines, a small National Guard encampment called Camp Dodge would play a key role in helping to train a rapidly expanding national army for the Great War. Camp Dodge was established in 1909 as a training site for the Iowa Militia. It was named for Major General Grenville M. Dodge of Council Bluffs, Iowa’s most famous Civil War commander. Originally constructed on a 78-acre tract of land, the post had been expanded to 570 acres by 1917. On June 15, 1917, a delegation from the U. S. Army Selection Board chose Camp Dodge as one of sixteen regional training camps for the National Army of the United States. Expanded, through lease options, to 6,400 acres, Camp Dodge provided initial military training to recruits (both volunteers and draftees) from Iowa, Nebraska, Minnesota, and North and South Dakota.

Camp Dodge became the headquarters for the 88th Division, commanded by Major General, Edward Plummer. "Initially, the 88th Division was comprised of 27,000 men from ages 21 to 30, including 8,000 Iowans. The remaining troops came from Minnesota, the Dakotas and central Illinois. War Department statistics later revealed that seventy percent of the recruits had been drafted and that eighteen percent were foreign born.

At Camp Dodge, more than 10,000 soldiers were hospitalized with the Spanish Influenza, and 702 of them died. Miraculously, the emergency ended as quickly as it had begun.

In 1917, Fort Des Moines became the first Officer Candidate School for African American men in the U. S. Army. There were 1,000 black college graduates and faculty from Howard, Tuskegee, Harvard and Yale universities. Two hundred fifty non-commissioned officers (sergeants) from the army’s four black standing units—the 9th and 10th Cavalry “Buffalo Soldiers” and the 24th and 25th Infantry—would also attend the camp. (The term Buffalo Soldiers was used to identify all-black military units that were formed after the Civil War in 1866). The 1,250 candidates made up the 17th Provisional Training Regiment. All of these men served with the 92nd Division in France and many of them became prominent in civilian affairs after the war.

Following this class, 104 doctors and 12 dentists earned commissions as the first African American medical officers in the Army.

Private Merle D. Hay was an Iowa native from Glidden. He enlisted in the U.S. Army in May of 1917. He was sent to Fort Bliss, Texas, and then to France. He and two other soldiers were killed on November 3 during a German invasion. Private Hay was the first Iowan killed in World War I.

The first U.S. woman to die of injuries in a combat zone was also an Iowan. Her name was Marion Crandell, formerly a French teacher at St. Katharine's School in Davenport. She died while serving at a canteen near St. Menehould, France, when an artillery shell exploded. 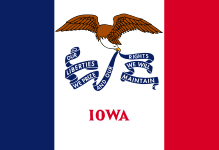 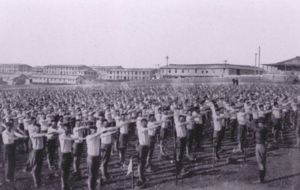 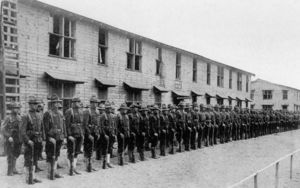 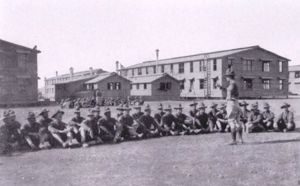 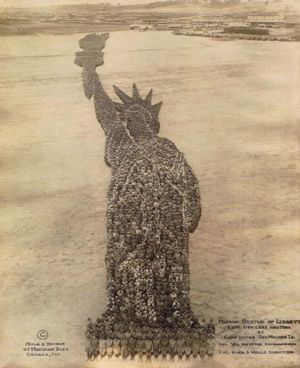