[send private message]
This page has been accessed 226 times.

Jarrow was incorporated as a municipal borough on 4 June 1875. The Charter of Incorporation led to the formation of a town council consisting of a mayor, six aldermen and eighteen councillors.
The coat of arms of the new borough symbolised its ancient association with the Venerable Bede and the Church, and its connection with the sea, ships and contemporary Victorian industry.
The crest – a dragon holding a crescent – is from the coat of arms of Sir Charles Mark Palmer, the prominent local shipbuilder, who became the first mayor of the borough. 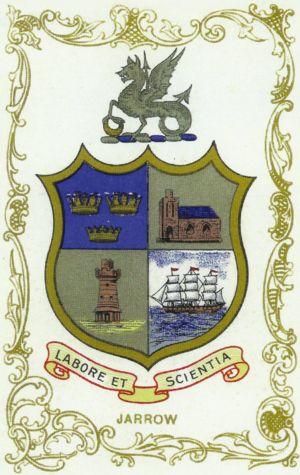