[send private message]
This page has been accessed 103 times.


Dear Sir. I enlisted in the 52nd P.V. under Captain G.P. Davis and was sent on detached sevice on to the Mound Citty and was wounded in the privates and I was bashful and did not show my wound to the doctor and I got out of my head and got off the boat I do not know hardly how and I wanderd around I do not know how long and when my mind got strait I wanted a discharge and people told [me] to enlist in another Regiment and I would get a discharge that was all that was nesesary so I enlisted in the 204rth or the 5th Pa Heavy Artilery Co. E. I enlisted the first time as J.L Crofutt and the second as James Crofutt. then they accused me of drawing James Crawfords pension and stoped it and now would you please to look this up and let me know before I die that I was not receiving another mans pension.
I am an old man I will be 74 next June and I am that poor that I have not got a shirt or coat vest or pant or hat.

Sir:
Your letter of the 25th ultimo, addressed to the President, was forwarded to this Bureau and received yesterday. In reply you are informed that your pension under certificate #687053, as a member of Co. F, 5th Pa. Heavy Artillery, was not terminated because of your having secured the pension that belonged to another man named Crawford.
Your name was dropped from the rolls because it was found that you deserted from the organization in which you first enlisted, and upon your second enlistment secured bounty other than from the United States in excess of that to which you would have been entitled had you completed your first contract of service.
This action was in accordance with the law and is adhered to.
Very respectfully,
G. M. Saltzgaber.
Commissioner.

According to several statements by James.

He enrolled at West Burlington, Bradford Co., Pennsylvania (PA) as J. Lyman Crofutt, and mustered in 29 Oct 1861 as a private in Company E 52nd Regiment Penn. Infantry. He was transferred to Mississippi Marine service about 10 Feb 1862 and assigned to the Gunboat "Mound City." About June 1863, above Ft. Pillow, he was wounded, got sick, wanted to go ashore, was demented, is not sure about when he actually left the gunboat. {At one point it was thought that he had been killed when the boat was blown up} After the gunboat was sunk {this is what it says in the typed transcript} he was taken ashore, believes at Mound City, {in Illinois} and was in a delirious condition. He has no memory of later events. He never went back to the boat, he went home, until the end of his first enlistment. He also served from Aug 25th 1864 to June 30 1865 in Company F 5th Regt. Penn. Heavy Artillery and was honorably discharged on that date. He received a bounty of $300 from the county and another of $66. 2/3 {that being 2/3 of that promised, since his regiment only served 10 months because the war ended} from the US Government. About Sep 1, 1864, in the line of duty at Fort Reno in Virginia he contracted Piles and Heart disease. The cause of piles was the result of chronic diarrhea. He was treated by the regimental surgeons.

From the Company Rosters:

25 Sept 1861 enrolled Co. E 52 Regt. Pa Inf. as Lyman (Liman) J. Crofutt
Oct 16 1861 mustered in at Harrisburg, PA for 3 years.
Nov 25 to Dec 17, 1861 sick in Columbia Hospital
Until April of 1863 he is reported as on detached service
April 18 1863 Special Muster Roll Remarks: On detached service and supposed to have been killed on the Mound City when she was blown up.
May and June 1863 he is reported as on detached service.
July and Aug 1863 Company Muster Roll report: Deserted from Gun boat Mound City at Cairo a few weeks before it blew up. Exact date not given.

From assorted Pension documents:
Apr 16 1889 from adjutant generals office. Also known as Crowfoot. Name of James L. Crofutt not known. The records of this office furnish no evidence of disability
Aug 12, 189? (number not on form) Declaration for Invalid Pension reason of Piles and heart disease, rheumatism. Residing at Blackwell Station Indiana Co. PA.

Additional documents dated 1895 are accounts by neighbors that he was almost completely disabled due to piles and rheumatism. There are several reports by doctors as to his condition, which was evidently pretty bad.

In 1891 approved for $12 “invalid” pension
In 1894 reduced to $8. It is unclear as to why it was reduced. The amount from $6 to $12 was assigned by the ability of a person to support himself.
Jan 4 1908 – last payment
Feb 15 1908 – Order to Drop James Crofutt from pension list / letter It was ordered that he be dropped because he deserted from his first enlistment and then received bounty money in excess of what he should have received. James does make a statement that he honestly did not know he was doing something wrong by accepting the bounty.

Between 1912 and 1918 there are several attempts by James or someone else acting on his behalf to reinstate his pension.

This breaks my heart -- old, infirm, poor, misinformed. Why didn’t someone suggest that he try to get the charges of desertion dropped.

12 Nov 1907 living at Rockbridge, Ozark, Nebraska he mentions his siblings

George Clinton who had lived in Alva, Bradford Pa twenty years before(1907-20years)
William Chaucey – he heard that he’d moved to Iowa
a sister Lydia Ann Coe of Williamsport, PA the widow of Luther Coe.
He does not mention Harriet, but she had been dead 50 years.

The USS Mound City, was a 512-ton Cairo class ironclad river gunboat, that was built at Mound City, Illinois, for the U.S. Army's Western Gunboat Flotilla. Commissioned in January 1862, she was in combat during the later winter and spring of 1862. She participated in the action at Columbus, Kentucky, in February 1863; the capture of the Island Number Ten fortress in March and April; and operations against Fort Pillow in May. She was twice rammed by Confederate steamers off Fort Pillow on 10-11 May, requiring her withdrawal for repairs. The gunboat returned to action in June but was badly damaged by enemy cannon fire during a bombardment at St. Charles, Arkansas. Repaired again, she was involved in operations in the Yazoo River, Vicksburg and Grand Gulf campaigns during 1862-63. In March-May 1864, Mound City participated in the Red River expedition. Her activities during the remainder of the Civil War involved guard and patrol duties and excursions up Mississippi River tributaries. She was decommissioned after the end of the war and was sold in November 1865 and broken up in 1866.[2] 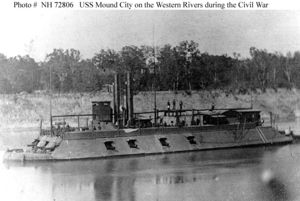