The History of Kaltenbach (Nové Hute)

[send private message]
This page has been accessed 514 times.

(This page refers to the history of the village Kaltenbach, today Nové Hute, Czech Republic, until the end of World War II)

Kaltenbach is a small town in south-west of Bohemia (Böhmen).

Kaltenbach was founded 1840 as a setllement of glasmakers. The region was then part of the Austrian Empire.
As a result of the 1st World War Bohemia became part of the then created Republic of Czechoslovakia. The annexation of the Sudetenland, of which Kaltenbach was part of, by Adolf Hitler in 1938 led later to the expulsion of Germans out of the 1945 re-established Republic of Czechoslovakia. In Kaltenbach a big part of the population either fled or were driven out of Kaltenbach . The families were scattered all over Germany.
This way a person like Franz Mann was born in the Austria-Hungrain Empire, became a Czechoslovakian citizen and later a member of Adolf Hitler's German Empire (Deutsches Reich), all without moving or even being asked.
In some cases men like Ferdinand Luksch served in two armies, (the Czech and the German army) that were hostile to each other. His father, Ferdinand Luksch sen. had yet served in another army, the Austro-Hungarian army.
More information on Nové Hute can be found on Wikipedia. 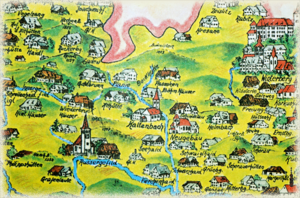