[send private message]
This page has been accessed 1,747 times.

This page will cover the battles associated with the King Arthur Legends.

Laura: There is a source from BBC that took a look at the battles in question and tried to date them and locate them. Currently it is the last in the line of sources.
Sprinkled amid other sources are notes here and there about a battle.
The Anglo-Saxon Chronicle (in the sources) tells the story of Britain from the view point of the invaders. It lists some battles but does not include the final battle. One could make the argument if they lost so badly perhaps they did not want to include it as ancient history often deleted things not favorable to their rulers.
This is toward the end of sources http://militaryhistoryonline.com/ancient/britain/king.aspx Saxon Ally
There is also the possibility, proposed by August Hunt in his downloadable book "The Road from Avalon", that Arthur developed from King Cerdic, founder of the Saxon dynasty of Wessex. The name Cerdic is Celtic, not Germanic, and he may well have been Ceredig son of Cunedda Wledig. Arthur's battles as recorded in Nennius may be identified with Cerdic's battles in the Anglo-Saxon Chronicle.

Merionydd King
August Hunt, as a second alternative, suggests that King Arthur was really King Cadwaladr of Meirionydd. His name translates as "Battle-Leader", exactly identical to Nennius' description of Arthur as Dux Bellorum; while one probable location for Arthur's death at the Battle of Camlann is the Camlan Valley on the border of Meirionydd and Powys.

Also from that same site is an analysis of the 12 battles
http://militaryhistoryonline.com/ancient/britain/twelve.aspx
The tenth battle, the Battle of Truibruit, is documented in other sources than Nennius. The 'Black Book of Carmarthen,' a medieval book of Welsh poetry, tells of one of Arthur's companions who came back with a broken shield from 'Tryvrwd'. To lose one's shield in Battle has always been taken by the Romans as a sign of disgrace and defeat. This poem conveys that the victory was barely won, and the defeat narrowly avoided. The same poem tells us that the casualties were heavy; that one of Arthur's men killed his enemies three at a time, another a hundred at a time. It also refers to 'the shores of Tryvwyd'. So, Tribruit was a river, and again a battle for a crossing. Unfortunately, we don't know where this river is, but it has been placed in the North, maybe another campaign against the Picts….or maybe Rebellious Celts? It has been suggested that the Northern Celts didn't see the danger of the Anglo-Saxons as the southern ones did, and were less cooperative than Arthur might have wanted…who knows? The eleventh battle was fought on the hill called Agned. According to a marginal note in some of the manuscripts, this was in Somerset. If this is so, it would appear that, while Arthur's main army was engaged in the North, the English had broken through in the South and marched deep into the West country. This theory is borne out by the twelfth, and most desperate, battle, the battle of Mount Badon. The fighting here must have been desperate, for Arthur was fighting the combined strength of the Anglo-Saxon forces. His victory must have been absolute, for the Anglo-Saxon Chronicle records no Saxon victories in Britain for the next 50 years.
http://www.legendofkingarthur.co.uk/battles-king-arthur.htm
Nennius records that King Arthur fought twelve major battles. The texts of Nennius (AD 796), the Easter Annals, and the Anglo-Saxon Chronicle point to where these battles were geographically, but as in most things to do with King Arthur, there is room for debate as to where events really took place. http://www.britannia.com/history/arthur/kabattles.html analysis...
I would say some yes, some maybe, and some probably but Arthur may have had nothing to do with them... 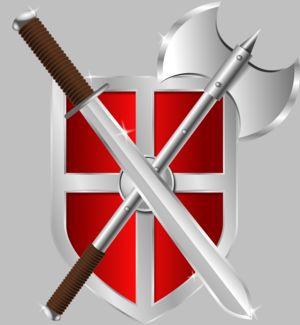