[send private message]
This page has been accessed 652 times.

The future Kleberg County was part of the Spanish province of Nuevo Santander, which encompassed the area between Tampico, Mexico and the Guadalupe River in Texas. The County was named for Robert Justus Kleberg, immigrant..[2]

1747, Joaquín de Orobio y Basterra led a small party of soldiers across the area that is now Kleberg County, gathering the first information on the county. A few years later, Spanish authorities founded a number of towns on the banks of the lower Rio Grande, and much of the land north of the Rio Bravo/Grande was granted to ranchers from those communities, including large tracts.

1846 Gen Zachary Taylor went through this area with his American troops toward the Rio Grande River.[3]
1846-48 - Mexican-American War
Post 1846, land was designated as Nueces County. [3]

1847-53 -King Ranch, located in portions of Brooks, Jim Wells, Kenedy, Kleberg, Nueces, and Willacy Counties.. Acreage- 825,000 Acres Primary use of the Ranches: Cow-calf, feed yard, farming, horses, oil and gas, wild game hunting, birding. This is the most successful ranch of Texas with the most stories.. Captain Richard King, stow-away on a steamship and pilot during the Mexican American war and later the Civil War. He made a fortune on his steamship business. When he founded the ranch, he knew almost nothing about cattle ranching. He made smart decisions on buying land with the only fresh water. King was also able to coax a whole Mexican town of vaqueros to move to his ranch in Texas and thus work for him..The King Ranch, Inc.—it was incorporated in 1934—has diversified interests ranging from agribusiness to oil and gas, and it is co-owned by Captain King’s heirs and other stockholders.[4]

1853 Richard King purchased the Santa Gertrudis grant in Kleberg County from the heirs of the original Spanish grantees and started the King Ranch. [3]

History of Kleberg County is similar to that of the Ranch history for 50 years.. [3]

1903- the St. Louis, Brownsville, and Mexico Railway railroad was built through South Texas to Brownsville.[3]
Henrietta King, owner of the King Ranch opened land for sale from the ranch.[3]

A surveyor employed by the ranch did the surveying and platting of Kingsville town in a pasture. (3 miles East of headquarters).[3]

Before the railroad arrived, some lots were sold.[3]
Farmers began to grow cotton, and vegetables.[3]
1912 Kingsville population was 4,000.[3]

The Railroad had built shops and headquarters in Kingsville. Employees of the Railroad thus shopped there.

Some began ranching and many invested in Jersey cows. Soon milk was sold to a creamery in Kingville.[3]

The Creamery provided income and place to work for farm families. .[3]

Time came when people wanted the county to be its own county instead of part of Nueces County. [3]

The law established 5 residents to organize it. They used Anton Felix von Blücher to do the surveying. [3]

(NOTE there is a digital library in Corpus Christi where the von Blücher papers are archived. In those papers were named the great grandfather of this author - (receipts of payments he made for Richard King in the mid to late-1850’s.

1913- county officers were chosen, with Kingsville as the county seat. They were to build a courthouse and a hospital. These officers used rented offices in downtown Kingsville while the courthouse was being built.It was completed 1914.

1919 First Oil well was producing with other oil exploration underway. [3]

1940- population was 16,857 the increasse was aided by the Naval Auxiliary Station (or Naval Air Station, Kingsville) a d a celanese plant employees made homes here..[3]

1950’s the railroad closed its offices, shops, moving employees out. but population continued to grow[3]

This ranching family will not talk to the press. According to the 1957 book, "The King Ranch" by Tom Lea: Tom T East a rancher married Alice Kleberg, granddaughter of Richard King and the King Ranch in 1915. The newlyweds went to live on Tom East's San Antonio Viejo Ranch located 75 miles from the King Ranch. The Easts suffered financial troubles and sold their 77,000 acres . After this the first oil well was found on their ranch San Antonio Viejo.).. Upon Alice Kleberg's death, her estate was transferred back to the East family.

Robert and Evelyn East, widow of his brother own the East Family Ranches. Robert owns the San Antonio Viejo, Casa Verde and San Pablo while while Evelyn East owns the Santa Fe.[5]

The Basses are similar to the Easts. The family is very tightlipped. Neither the family or employees will confirm location, acreage. According to what we can find, there are 3 Texas ranches.
1) Lee Bass owns El Coyote (S of Falfurrias )
2) Ed owns the Wainscot (SW of Fort Worth)
3) the Bass family owns the San Jose cattle company on the Gulf Coast as well as additional acreage scattered around Texas..
4) Winfield Scott founded Winscott, founded by Winfield Scott (Fort Worth millionaire)
5) San Jose Ranch is located on San Jose Island (north of South Padre. Cattle would have to swim or be transported by barge to and from the mainland. (The Island has an airstrip, but is used for people).[6]

May 20, 1854 - Richard King an "Legs" Lewis purchased the de la Garza Santa Gertrudis grant (53,000 acres) from Praxides Uribe of Matamoros, Tamaulipas for $1,800, on the condition of a perfected title (complete documentation of the land grant).[7]

Location - Texas VALLEY- Kleberg County locale is south of Corpus Christi on U.S. Highway 77 in the Rio Grande Plain region of South Texas. 853 square miles lies on the mainland and remainder is on Padre Island.

Elevation: sea level to 150 feet, part of the county's

Soil - The county's clay and loam soils are covered in places with such brush as huisache, mesquite, and ebony.

Kleberg County was organized in 1913 and is named for Robert Justus Kleberg (b1803), an early settler.

The county seat is Kingsville. Kleberg County is included in the Kingsville, Texas Micropolitan Statistical Area.

Kleberg County is named in honor of Robert Justus Kleberg

(of Note: Wikidata does not want Sr. on the first person named that, it wants a son if pertinent to be named with ,Jr.)

The law established 5 residents to organize it. They used Anton Felix von Blücher to do the surveying. [3]

1913- county officers were chosen, with Kingsville as the county seat. They were assigned to build a courthouse and a hospital. These officers used rented offices in downtown Kingsville while the courthouse was being built. [3]

The 1914 Kleberg County courthouse was built one year after the county was organized and is the only courthouse the county has ever had. The style is Texas Renaissance, built of brick, tile, concrete. [8]

Riviera was established by Theodore F. Koch in 1907 after he purchased 20,000 acres of land from Henrietta Chamberlain King. Riviera was located 9 miles from Ricardo

Ricardo was established in 1908 was located on the St. Louis, Brownsville, and Mexico Railroad railroad six miles south of Kingsville, and was started as a trading center for farmers living nearby.[9] 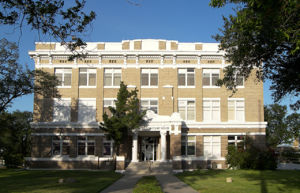