[send private message]
This page has been accessed 2,688 times.

In 1708, Rev. Joshua Kocherthal and forty-one German Palatines traveled down the Rhine river to make their way first to England and then America. The Germans were fleeing a war ravaged homeland from the Thirty Years War and a new war between France and the Allied Nations of Spain, England, and Germany. The Palatinate was caught in the middle and occupied by the French army to keep it out of the hands of the Allied Nations as a source of supplies. Then came the War of the Spanish Succession where troops were led through the Palatinate to fight in Blenheim. Then the French conquered the country. The Palatinate was a most unfortunate place. 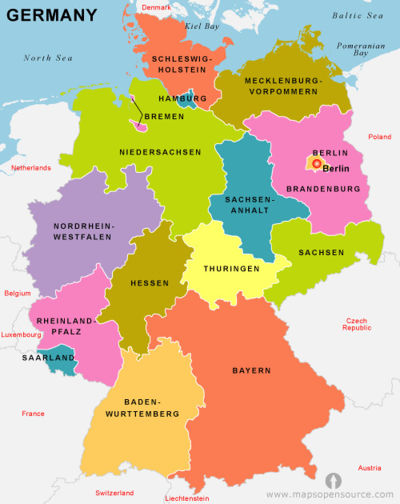 In 1706, Rev. Joshua Kocherthal went to England to learn about life in the English colonies in America. He returned to the Palatinate and wrote a pamphlet about the wonderful possibilities in what was known at the time as Carolina. Many Germans knew about Pennsylvania, from the large group that immigrated there in the 1680's with William Penn, but Rev. Kocherthal was advocating for a group to settle in Carolina. For many, what Rev. Kocherthal was telling them looked better than what they were living. With the French ruling the land, the Palatines were ordered to become Catholics. For a people that was devout Lutherans, this was a huge blow. Then the harsh winter of 1708-1709 hit and many Palatines lost their lives due to the lack of food, clothing, and shelter. The winter was so bad, all of the rivers in Northern Europe froze and did not thaw until late in February. However, there was hope...Queen Anne of England. 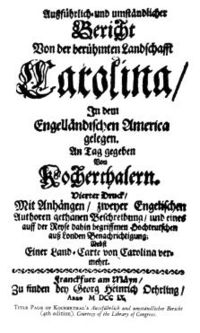 Queen Anne felt it was her Christian duty to aid the suffering Lutheran Palatines. Her husband, Prince George, had been Lutheran, so Anne agreed to help the Palatines that could make their way to Rotterdam, Holland. This part of the trip alone took about a month. The exact number of Palatines that made their way to England is unclear. Some sources say about 32,000 and others are closer to 13,000. Either way, the numbers where much higher than anyone had ever thought. There was a catch however for Anne's help. The Palatine were expected to settle in the English colonies, provide naval supplies back to England, and be loyal to the English crown.

The initial group of Palatines, in 1708, was small. There were 41 Palatine Germans, including Kocherthal; 10 men, 10 woman, and 21 children, ranging in age from six months to 15 year old. There were 10 families led by: Melchior Gulch, Johannes Fischer, Joshua Kocherthal, Jacob Pletel, Henry Rennau, Lorenz Schwisser, Andreas Volck, Jacob Weber, and Michael Weigand. There was one single male, Isaac Turck. By the time the group was ready to set sail, Melchior Gulch's wife had become gravely ill with breast cancer, so the family stayed behind in England to tend to her. Even though the English surgeons were hopeful, she passed away. In their place, Peter Rose, his wife, Maria Wemarin, Isaac Feber with his wife and son, Daniel Fiere, with his wife and two children, Peter Hubertsen and his son Jacob, and Herman Schuneman brought the final total of the group to 54. Queen Anne was also sending John Lovelace, 4th Baron Lovelace of Hurley, to New York to become the Governor of New York and New Jersey.

In the middle of October, 1708, the group set sail for New York on board the Globe. The journey took over two months across the Atlantic. Two children were born during this time and were baptized by Rev. Kocherthal on board. One was Johann Hermann, son of Jacob and Anna Elizabeth Weber and the other was Carolus, son of Andreas and Anna Catharina Volck. This child was named after the captain of the Globe, Carolus Congreve. The Palatines landed at Flushing, New York in the middle of December and spent the winter in New York City, where two more Palatine children were born: Jannicke, daughter of Johann Michael and Maria Schuetze, and Johannes, son of Johann Jacob and Elisabetha Plettel. Governor Lovelace gave the Palatines land on the west side of the Hudson river, at the mouth of the Quassaick Creek, about 55 miles north of New York City, in what became Newburgh, New York. Governor Lovelace took care of the Palatines during his tenure as Governor, providing them with food and other necessities. However, Lovelace passed away shortly after their arrival in New York, on May 6, 1709. Soon after Governor Lovelace's death, the Palatines were in dire need once again.

In August 1708, Rev. Kocherthal returned to England to help secure further aide to his small group of Palatines and himself. However, Rev. Kocherthal was in the right place at the right time. Due to the large number of German Palatines leaving the Palatinate and immigrating to America, via England, at the same time, Kocherthal has been attributed with being the leader of the large group of immigrants in 1709. He was, in large part, a leading force, however it was more in his success of getting his initial group to New York and getting the aid of England, than actual leadership. Regardless, Rev. Joshua Kocherthal aided in the massive surge of Palatine immigrants in American between 1708-1710.

Queen Anne found a replacement for Governor Lovelace in Colonel Robert Hunter. Hunter proposed to the Queen that she send 3,000 Palatines with him to New York. The Palatines would be obligated to the Crown and would receive their passage to America, subsistence, 5 pounds, and 40 acres of land when they repaid their debt. The Palatines were expected to work off this debt by working in the naval stores producing tar. The Queen agreed to this plan. Governor Hunter was allotted his 3,000 Palatines, 10 ships for them to travel on, and a number of British Man-of-War ships as the convoy to the ships. The ships left sometime around the middle of January, 1709 and, unlike the initial sailing, this sailing took six months. The state of the Palatines when they arrived in New York was deplorable. Almost 500 Palatines died en route and another 250 died once reaching New York City. The group were quarantined on what is now called Governor's Island just off the south shore of present day Manhattan.

Once Governor Hunter arrived in New York, he decided the Palatines would settle in the Hudson River Valley. He purchased 6,000 acres of land along the Hudson River from Robert Livingston. It was here, about 100 miles, north of New York City that the Palatines settled in what became known as the East Camp and West Camp.

The East Camp is what is now known as Germantown, NY and West Camp, which was known as Newtown, is known as West Camp, NY. The majority of the large group of Palatines that came with Governor Hunter settled in East Camp with about 1,900 people settling there. The Palatines did work the naval stores initially, but the quality of the tar and turpentine was poor and by 1712, the English government stopped the work and also stopped providing subsistence. The Palatines were left to fend for themselves. Some families moved on to Pennsylvania, New Jersey, and New York City. A few families bought land near present day Rhinebeck from Henry Beekman. About 50 families bought land from the Mohawk Indians in the Mohawk and Schoharie Valleys and by 1713, an additional 150 families moved there as well. The 63 families that did stay in East Camp, were finally awarded the deeds to the lands they had been occupying since first settling.

Rev. Kocherthal built a church on the glebe at Newtown or West Camp. The first service at the church was on June 3, 1711. Kocherthal ministered to the Lutherans and Rev. John Haeger ministered to the Reformed Germans. The church was used by both the Lutherans and the Reformed. Kocherthal also ministered to people outside of the Hudson Valley in the Catskills and even as far north as Albany. Rev. Kocherthal passed away suddenly on December 27, 1719 at his home at Newtown. He was buried on his land alongside his wife Sibylla, who had died in 1713. In 1898, their remains were moved and interred under the sight of the present St. Paul's Evangelical Lutheran Church. Their grave marker can be found in the entryway of the church. The grave marker reads: "Know, O traveler, under this stone rests beside his Sibylla Charlotta, a genuine traveler, of the High-Germans in America, their Johsua. And a pure Lutheran preacher of the same in the east and west of the Hudson river. His first arrival was with L'd Lovelace 1707-8, January 1. His second with Col. Hunter 1710, June 14. Brought his journey to England to end. His heavenly journey was on St. John's Day, 1719. Do you wish to know more? Seek in Melanchton's Fatherland Who was Kocherthal Who Harschais Who WInchenbach. B. Berkenmeyer, S. Huertin, L. Brevoort MDCCXLII" 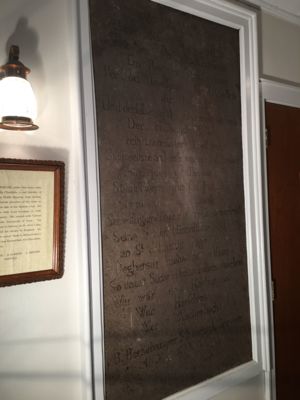 A monument was erected in West Camp, NY in honor of the Palatines that came to the area in 1709-1710. It was dedicated on June 13, 1998. The names on the monument have been transcribed by Sylvia Hasenkopf. The names below are listed on the monument because of the appearance of the name on Governor Hunter's Lists for October 4, 1710, as well as confirmation in either the West Camp census of 1710, the Canadian Expedition Volunteers List of 1711, or the Haysbury village list of male heads of families found in the Documentary History of the State of New York. 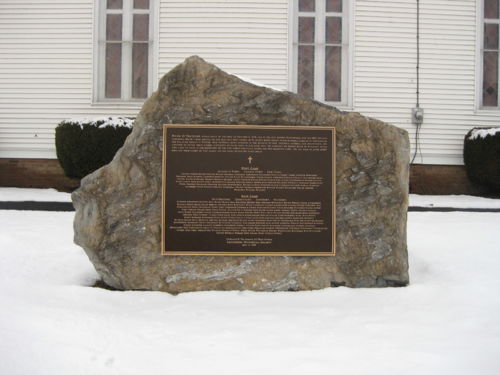 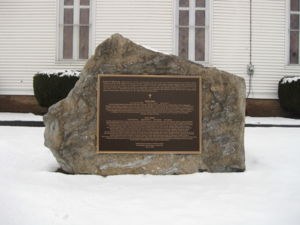 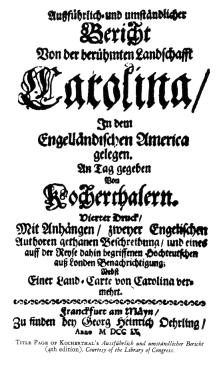 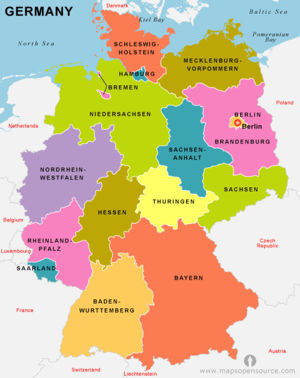