[send private message]
This page has been accessed 208 times.

307.54 acres of forested hills in Perry County, Missouri. Henry Kulhman and Jeanette Maddock settled here by their marriage in 1894. (It was 286 acres at the time.) How Henry managed to obtain the land is a mystery, but Judy Nelson has a workable theory:

the 1860 census shows a value of 300 in real estate for the Yates family and since Mahala was a widow and Charles Thomas, the only son, I wonder if Mary Ann somehow passed it on to Henry A when they married.

On maps such as Google a transcription error leads to some of this area being labeled "Coleman Hollow" but it is corrected in official records.

According to tradition the Indians had located a silver mine, possibly in the southern part of Bois Brule Township, near the Allen's Landing Road. James McCauley found a cave which he believed to be the lost mine, but no silver was ever discovered, and the tradition of the lost mine continues. (A MODERN EDEN 34)

Allen's Landing Road is now Missouri State Highway T, and on the south fork of the Saline Creek just off that highway there is, indeed, a very small mine within a bluff. It is hard to reach and barely large enough to serve as shelter. My father often commented that it was the result of early pioneers seeking silver, perhaps motivated by this legend.


Images: 1
Our Lady of the Saline grotto 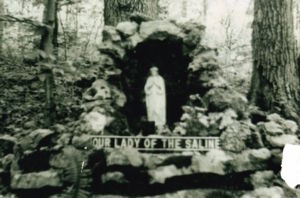