[send private message]
This page has been accessed 942 times.

9200-6000 B.C. -Artifacts date from the Paleo-Indian period show humans lived 11,000 years. [2]
6000 B.C.-A.D. 1000 Archaic period - the hunter-gatherers spent time in the area, living on roots, game, wild fruits, seeds. They carved tools from wood and stone and wove baskets and rabbit-skin clothing.[2]
A.D. 1000 to the arrival of the SpanishLate Prehistoric period Indians learned to make pottery, hunted with bows and arrows. [2]
1700s Coahuiltecan Indians were squeezed out by Apaches and others
Coahuiltecans from the area that is now La Salle County entered San Juan Bautista del Rio Grande del Norte in Coahuila.[2]
1689 and 1690 Alonso De León traveled across the area using the lower part of Old Presidio Road ,[2]
1777 Friar Juan Agustín Morfi, on the lower Old Presidio Road, crossed the Nueces and passed by Palo Alto.[2]
1821-1830 - Mexican government used land grants to encourage its citizens to settle in Texas.

1834, Jesús Cárdenas received 31,500 acres of land along the Nueces River, about 10,000 acres in La Salle County[2]
1836- 1848 - this county area most of what is now La Salle County lay in the disputed area between the Rio Grande and the Nueces River until after the Mexican War .
1836 - Treaty of Guadalupe Hidalgo his strip of land, it became a haven for desperados until settled. This delayed settlements
1852 Fort Ewell was built by the U. S. Army S of Nueces River. First Anglo-American settlement came with the establishment of it.[3]
1854 The site proved to be unhealthful, and the fort was abandoned.
1858 La Salle County was created 1 February 1858 from Bexar and Webb Counties, but was not organized until 1880. First settlements on the Laredo/San Antonio road. [4]
1858 William Waugh established large ranch. He left 1861, Returned in 1870s. [2]
1868 - stage stop then Cotulla served also as meeting place for cattle buyer.  :when the fort was closed the inhabitants moved there from Iuka (8 miles W Cotulla).[4]
1868 Polish immigrant, Joseph Cotulla, came to the county and established a large ranching operation. Cotulla encouraged the International & Great Northern Railroad to build through the town he was developing by donating land to them. [4]
1869 -1870s La Mota Ranch, run by William and Amanda Burks. In 1870 the census taker found only 69 people.[2]
1870s Waugh's Rancho was a stopping point for travelers. A store was established on the spot, and the place became a center of activity in the area; in 1879 it was granted a post office .[2]
1870s. As population increased, ranches were established and La Salle County was officially organized in 1880 with Stuart’s Rancho, near Guajoco, being the first county seat. [4]County seats: Stuart's Rancho (1880-1881), La Salle (temporary county seat 1881-1883), Cotulla (1883-present) [5]
1880s James J. and Andrew J. Dull, wealthy brothers from Harrisburg, PA purchased large tracts of La Salle County land, including much of W. A. Waugh's property-large ranch. [2]
1880s - La Salle County was officially organized with Stuart’s Rancho, near Guajoco, being the first county seat. [4]
1880 Railroad was built in the county in the 1880s. Towns like Guajoco and Iuka faded away once settlers started moving to towns along the railroad. [4]
1882, a depot was built and town lots were being sold. Jesse Laxton (aka Laxson or Laxon)The postmaster of Iuka, tried to lure the railroad also by establishing the town of La Salle E of Cotulla across the railroad tracks. A jail and temporary courthouse were built there and it became the temporary county seat in 1882. [4]
1883 - Special election voted the town of Cotulla to be county Seat, named for its founder, became the county seat and the town of La Salle faded away.[4]

As immigrants moved in to establish farms, Mexicans moved into La Salle County in large numbers to clear land, to help build the railroads and towns, and to work on the new commercial farms. People of Mexican descent had been a significant part of La Salle County's population since its earliest days; (1887 state census half of the county population was of Mexican descent).

When President Lyndon Johnson took his first job 1928 in Cotulla, he saw a very poor South Texas town. Way before he was president, Johnson spent a year teaching at what was known as the little "Mexican school in Cotulla." He remembered them going through a garbage pile for food. He used his own pittance of salary to buy volleyballs and softball bats. Thirty eight years later, while president, he returned to Cotulla , as president, to honor National Education Week and spoke at the same school where he used to teach. President Johnson taught school in Cotulla LBJ teaching

1939 another of the large ranches, BRISCOE Ranches are 640,000 acres and located in the many counties: Brewster, Culberson, Dimmit, La Salle, Maverick, McMullen, Uvalde, Webb, and Zavala counties. The Primary Use is cow-calf, farming, Angora goats, and oil and GAS
Many people who inherit large ranches eventually downsize them. This does not apply to Dolph Briscoe, Jr., Texas’ governor from 1973 to 1979. Now 75, Briscoe inherited 190,000 acres when his father, Dolph Briscoe, Sr., died in 1954. He has more than tripled his holdings, making him Texas’ largest individual landowner and leases 100,000 acres in Maverick and Cochran counties. . [6]

A Lot of FIRES in this county. 1st Courthouse, 1884 Cotulla first courthouse , was a pleasant two-story Second Empire style structure made from brick with a soaring, truncated clock tower in the center of the front of the building, corner quoins, roof cresting and broken triangular pediments over the extended entrances on each side. (A picture of this courthouse can be seen at http://www.angelfire.com/ct3/diego/). This courthouse was burned by an arsonist in December of 1896. [7]

2nd Courthouse, 1897 Cotulla, second courthouse was built the following year. It was a square two story (with attic) wood frame structure with a hipped roof and a three-tiered tower extending from one side of the building with a conical turret. (A picture of this courthouse can be found at the Texas Historical Commission’s County Atlas at http://atlas.thc.state.tx.us/shell-county.htm ). This courthouse also fell to arson in 1904. [7] no image

3rd Courthouse, 1904 -Cotulla third courthouse was a two-story brick building with a hipped roof made of slate and Romanesque style details. The corners of the building extended slightly forward as did a central clock tower at the front entrance. The third courthouse had many similarities to the courthouse in Frio County.[7]

4th Courthouse, 1931-present, Cotulla - 1904 courthouse was demolished and La Salle County built their fourth and current courthouse on the same grounds as the previous courthouses. Designed in an Art-Moderne style with Art Deco details, it was built with brick and concrete with ceramic and terra cotta ornamentation. It was designed by Henry Truman Phelps The four story building (including a rooftop jail that is no longer used) is surrounded with pilasters that are crowned with stylized stone capitals. An ornamented stringcourse surrounds the rooftop and the spandrels are emblazoned with the initials of the county. A gilded terra cotta eagle with spreading wings is perched over each entrance. [7]

After serving the county for almost eighty years, the courthouse underwent an extensive restoration. A majority of the funding for the restoration came from the Texas Historical Commission in the form of a construction grant for $2.25 million in 2008 and a full construction grant for $3.5 million in 2010. The restoration returned the building to its 1931 architectural condition. Electrical, plumbing and phone systems were updated and a new geothermal system was installed to replace the building’s window air conditioning units. The construction and restoration were nearly complete by the end of 2012 and a rededication ceremony was held on January 26, 2013. [7]

County seat, located in NW part at the intersection of Interstate highway 35 and State Highway 97.
Center point at 28°20' north latitude and 99°05' west longitude.

Bexar, Medina, Uvalde, and Wilson counties have small portions within the defined area.

The region is noted for its year-round production of vegetables through irrigation.

Politics
Politicics in La Salle County sometimes became violent and at the least contentious before 1900. The slogan: "Vote right or fight" was an early election-day slogan. Both Democrats and Republicans alternately took large majorities in presidential contests. In 1884, for example, Democrat Grover Cleveland polled 300 votes to James G. Blaine's 72, but in 1888 Republican William Henry Harrison beat Cleveland 283 to 147. In 1904 no vote totals were reported. Since 1908, La Salle County voters voted for for the Democrats , which won twenty-one of the twenty-two presidential elections between 1908 and 1992. The only Republican winner in the county since 1900 was Richard Nixon in 1972. Since 1976 In presidential elections the Democrats have won large majorities in La Salle County; in 1988, Michael Dukakis received 1,615 votes overshadowed George H. W. Bush's 693. In local politics, significant changes resulted from the political mobilization of Hispanics in the county during the 1960s and 1970s. In Cotulla, for example, Mexican Americans had been elected to the mayor's office and several seats on the city council by 1974; and in 1983 the county's first Hispanic judge was elected.[8]

Jeff Bezos, founder and CEO of Amazon.com; maternal ancestors settlers in Texas. Over the generations, the family has acquired a 25,000-acre (100 km2) ranch in Cotulla.
John Lewis Gaddis, known as the "Dean of Cold War Historians", was born in Cotulla in 1941.

Ray Keck, fifth and current president of Texas A&M International University in Laredo,raised in Cotulla, father, Ray Keck Jr., was a president of the Stockmen's National Bank prior to 1967.

O Henry, the short story writer, lived on a sheep ranch near Cotulla in the early 1880s with the successful goal of improving his health in dry climate.

George Strait has a ranch near Cotulla.

Kevin Patrick Yeary, incoming judge of the Texas Court of Criminal Appeals, resides in San Antonio but was born in Cotulla in 1966.

author-folklorist J. Frank Dobie briefly left the University of Texas at Austin to work on his uncle's ranch in La Salle County. His articles about Texas Longhorn cattle helped to prevent their extinction.[8] 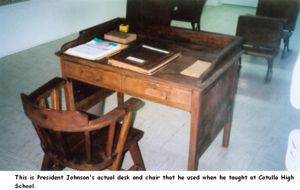 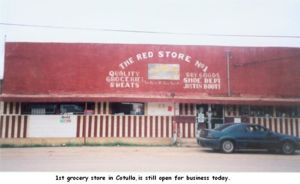 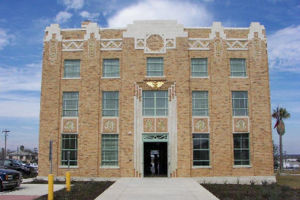 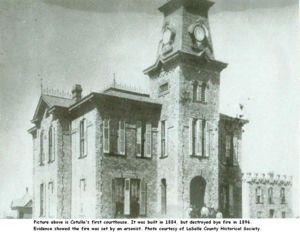