John P. Sommers House is a historic home located at Lancaster in Erie County, New York. It was built in 1906, and is a 2 1/2-story, wood frame Queen Anne style dwelling. It has a hipped roof and center projecting gable. It features a prominent two-story, five sided corner tower and has a single story porch across the front facade.

"The John P. Sommers house is a circa 1906 Queen Anne Victorian. The home is named after the the man who built it. John P. Sommers built the home for his wife, Matilda, and their four daughters. The Lancaster Bee newspaper, dated Sep 14, 1905, reported the following: “John P. Sommers purchased a lot from Senator George A. Davis on Lake Avenue opposite the glass factory office (Lancaster Glass Works) to build a residence for himself.” A Lancaster directory dated 1900 lists John P. Sommers as an Electrician and was located at 6 Central Avenue. He served as Deputy Sheriff in the late 19th century.

This home is clad with wood clapboards and shingles. As is typical with Queen Anne style, the facade is asymmetrical. A two story polygonal tower sits prominently at the front of the home. It has the uncommon feature of a flat roof. There is a full width porch with an end that curves into the tower. There are several leaded windows that grace the home. There is also a large Palladian window that is topped with a leaded glass window. 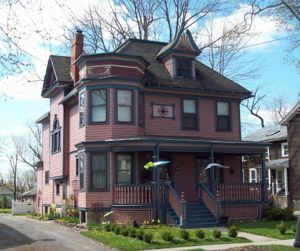