[send private message]
This page has been accessed 1,054 times.

Major Road: Highway 403 runs roughly north to south, from Emlichheim in the north to Bad Bentheim about 52 km (31 mi) to the south.

Language: Plattdeutsch, also called Low Saxon, or Nedersaksies. It's between Dutch and German, but closer to Dutch. It is part of the Twents dialect, also spoken in Overijssel.

Land makeup: It is mostly made up of fenland, a wetland habitat or marshland.

Best known commodity: Peat can be found in this soil, but the area is better known for Bentheim sandstone.

Grafschaft Bentheim has had quite a turbulent history. Listed are approximate dates with events.

100 AD: Twente was part of independent Frisia. The Tubanti tribe lived in this area.

719: Charles Martel conquered most of the area and incorporated it into the Carolingian empire.

828: A northern section split off of Twente and became an independent state called Bentheim, having their own counts to rule them almost as a separate country. The rest of Twente is now a part of the Netherlands.

1116: The castle of Bentheim is mentioned for the first time, its wooden structure being completely destroyed in a war between the Holy Roman Emperor and the Duke of Saxony. It was quickly rebuilt.

1312: Uelsen is taken from Twente & added to Bentheim.

1544: Arnold II of Bentheim-Steinfurt united the counties of Bentheim and Steinfurt, a county just south of present Bentheim. He also made the county Lutheran. Churches turning from Catholic to Lutheran included the ones in Veldhausen, Uelsen and Neuenhaus.

1613: Count Arnold Jobst established the Reformed Church as the religion of the area, most churches then becoming Reformed. They remain Reformed to this day.

1618: The Thirty Years War brought a financial crisis; many towns were plundered by unpaid Catholic Spanish soldiers, seen as a punishment for the area becoming Reformed.

1636: The Plague hits Bentheim; between fleeing to the Netherlands & dying from the plague, 2/3 of the people of Bentheim vanished.

1643: The county split in 2 again, our half being Bentheim-Bentheim.

1702: Ernest Willem's son, Count Ernest, converted to Lutheranism. A new constitution was written up in favor of the Reformed churches.

1752: The Electorate of Hanover seized the county after 700 years of its fierce independence. Thus the king of England ended up ruling it from very far away.

1803: The house of Bentheim-Bentheim became extinct, and the count of Bentheim-Steinfurt obtained it, including the castle. This family owns the castle and rights to much of the land to this day.

1806: Bentheim spent 10 years being swapped from country to country. In 1806 it was incorporated into Prussia. Then in 1810 it was added to Napoleon’s empire. In 1815 Bentheim returned to Hanover.

1846: Many people who had joined a more conservative Reformed church joined many Dutch people in immigrating to America to worship the way they wanted. This immigration lasted through the 1880's.

1866: Bentheim and Hanover were incorporated into Prussia, then Germany.

Divisions of the Land

Grafschaft Bentheim is divided into 3 cities by themselves and 4 larger areas. All except one have an average of 15,000 people living in the area. The 4 areas are broken down further into 22 smaller towns. There are still more towns in each area. Listed here are the 25 divisions and a link to see the vital statistics of the church associated with each. Some have no link yet.

Distinguishing Characteristics of the Area

Grafschaft Bentheim had a culture that leaned towards Dutch sympathies and dialect.

Names of the Area

Grafschaft Bentheim has appeared in many different areas over the years. These are the ones most commonly listed on profiles, along with the years they are used.

Since the language of the area was Low Saxon (Nedersaksies) until 1815, the place names are in Low Saxon until 1815, when they switch to German. In German, the Holy Roman Empire is called "Heiliges Römisches Reich."

From 1811 to 1885 the western half (Emlichheim, Neuenhaus and Uelsen) of Grafschaft Bentheim was divided from the eastern half. They are labeled as follows:

For people born before August 7 1806, go to Category:Grafschaft_Bentheim.

For people born after August 7 1806, go to Category:Grafschaft_Bentheim_(Kreis),_Niedersachsen. 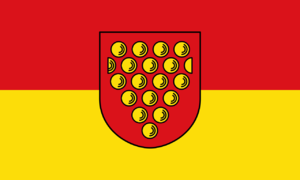 Coat of Arms of Grafschaft Bentheim 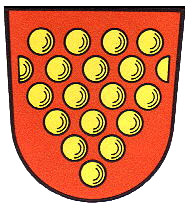 Map of Divisions in Grafschaft Bentheim 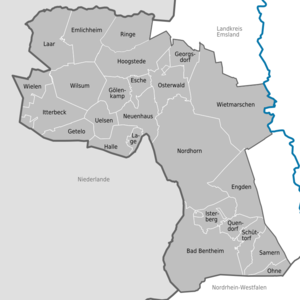 Kylie Haese
This is a perfect one place study page in my opinion. Love it. Awesome job Bertram!
posted Mar 04, 2020 by Kylie Haese