[send private message]
This page has been accessed 1,412 times.

This profile is part of the Laurens County, South Carolina One Place Study.

Leader of this Project is Paula J
Coordinator is Mary Richardson

The original inhabitants of this area were Cherokee Indians.[1]

1753 - First European here was John Duncan, from Aberdeen, Scotland, migrating from Pennsylvania. He settled near the current Newberry-Laurens County line. John Duncan liked the lush vegetation and abundant wildlife of this area, so he chose to settle near a creek in the NE part close to what is now known as Clinton, S.C. Duncan brought the first African-American slave and the first horse-drawn wagon to the area. [1]
1760's Duncan's settlement grew, so a church named Duncan's Creek Presbyterian Church formed. (oldest church for Laurens County). This church is still present today.[1]

1776-1782 Laurens County was the location of many battles and skirmishes during the American Revolution. These included the Battle of Musgrove Mill, Lindley's Fort, and Hammond's Store.[2]

Lindley's Fort Battle of Lindley's Fort was part of a campaign by Loyalist and Cherokee forces as they tried to obtain the back country control from the Patriot forces in 1776 during the American Revolution. They involved the Cherokees took up arms as settlers were encroaching on their territory.

Aug 18, 1780 - Battle of Musgrove's Mill rebels attacked the British and Tory forces with a victory in the 2-day battle. [1]
Dec 29, 1780 a Tory regiment was defeated at Hammond's Store which can be found near present-day Clinton. [1]
1881- Captain "Bloody Bill" Cunningham attacked a group of rebels killing 14 at Hayes Station (8 miles SW of Clinton) [1]

1785 After the war Revolutionary War, District 96 became the chief governmental unit for the backcountry. Laurens County was one of 6 counties formed from Dist. 96. It is named for the Revolutionary War patriot Henry Laurens of Charleston, SC, who was president of the Continental Congress during the Revolutionary War, and later served as an ambassador to France to secure aid in helping the colonies with their independence.. The town of Laurens became the county seat.[2][1]
Mar 12, 1785 -The General Assembly passed an act on this date to form 6 counties from the old 96th District. First settlers were John Rogers, Charles Allen, Jonathan Downes who were requested in the 14th and 51st regiments to lay out a town. Scotch-Irish immigrants out of Pennsylvania, Maryland, and Virginia became the predominate settlers of the county.[1]

1786 History tradition says a delegation met at the distillery of John Rodgers to select the site for the county seat. The men, tested John Rodgers' distilled goods, then all climbed the hill and chose the courthouse site. They selected a site fairly close to water as wells having 5 roads from the upcountry converging near the courthouse. [1]

1786 - Laurensville was voted to be the county seat. Later this town was renamed Laurens, S.C..[1]
1786 A wooden courthouse, also used as a church and a schoolhouse, was built.

1824 Laurens had become known for its trade of tailor-made clothes. Andrew Johnson, the future president of the United States, and his brother came to Laurens with his brotherin 1824 and established a tailor shop. [1][2]

Slavery Slavery on the Move

1837-38 An improved courthouse was built between during 1837, 1838 and enlarged in 1857 and 1911.[1]
1840 Medical offices, a confectionery, fruit store, carriage, buggy and wagon shops, tailor shops, builders, flour and corn mills along with 81 registered whiskey distillery could be found in this county.

1867-70 During reconstruction the white residents of Laurens County resented enfranchisement of the newly freed African Americans. Many of the African Americans supported the Republican Party. The white people organized Democratic Clubs to intimidate the elections. This was the precursor of the Ku Klux Klan in the lower piedmont counties.[1]
1870 Laurens County Riot-African Americans fighting the whites near the courthouse square. [1]
1871 - Martial Law was established in Laurens County and 8 other S.C. Counties. [1]

1895 - Laurens Cotton Mill was established.[1]
1896 - Mercer Silas Bailey built a mill in 1896. Also mills began in Lydia, Watts and Joanna. Laurens sought to revive its economy by spinning cotton rather than simply growing it. By the turn of the century, textile manufacturing had become an important part of the Laurens County economy with the Laurens Cotton Mill established in 1895 and Mercer Silas Bailey building a mill in Clinton in 1896.

Lydia, Watts and Joanna mills also began operation. Companies built villages around the new textile mills to ensure workers had housing near the mills. The concept of mill villages enabled mills to give an economic incentive and added a social feature for the county.[1]

1880's and 1890's Education expanded in Laurens County. Pratt Suber became the first county superintendent of education in 1874. [1]
1880 Thornwell Presbyterian College, known also as Clinton College (or Presbyterian College) was established in 1880, and privately sponsored libraries were formed which evolved in to a county library in 1929.[1]

1890's Railroads were built in the 1890's. Charleston and Western Carolina Railroad, the Columbia, Newberry and Laurens Railroad, and the Georgia, Carolina and Northern Railroad were some railways.[1]

World War II soldiers were trained on the campus of Presbyterian College and at a small airfield near Laurens.[1]
1940s - World War II, textiles and agriculture dominated the economy of Laurens county. Also a glass glass bottle manufacturing plants began and succeeded.[1]

Elementary education for children was still done in small one or two-room schools around the countryside. [1]

Retirement Centers have been built by three church denominations.[1]

Location - Laurens County is in the Piedmont Region of South Carolina
Topography: forests and gently rolling hills.
Rivers, lakes - The Enoree River separates Laurens from Spartanburg and Union Counties on the NE. Salada River and Lake Greenwood divide this county from that of Abbeville and Greenwood on SW

Other counties- Newberry County borders on the SE and Greenville on the NW. http://www.laurenscountysc.org/secondary.aspx?pageID=117

Presbyterian College, located in Clinton, is a four-year liberal-arts school founded in 1880. 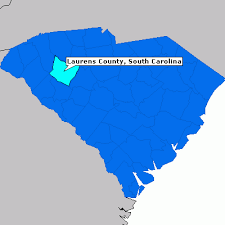 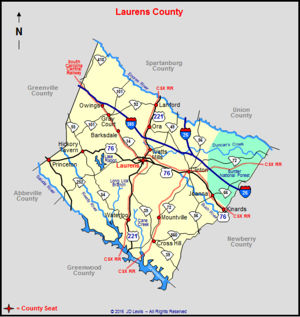 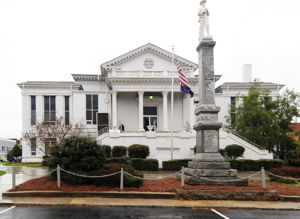 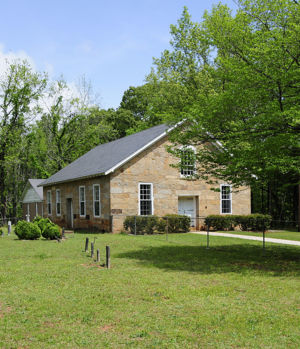 Donnie Blackstone
Here is one for this group https://www.wikitree.com/wiki/Downs-3023