[send private message]
This page has been accessed 11,618 times.

The Lied Public Library [1] is the library of the town of Clarinda, Iowa.

It was 1905 and a general meeting of the people of Clarinda was called. Mrs. Horace M. Towner of Corning, a member of the State Library Commission, and Miss Alice Tyler of Des Moines, Secretary of the Commission gave speeches. The meeting resulted in the election of a board of trustees, consisting of nine members that were instructed to organize an association to establish a library in Clarinda. The nine founding members were: Rev. Fletcher Homan of the Methodist Church Mr. L.W. Lewis Rev. Mr. J.H. Maclean of the Presbyterian Church Rev. M.E.T. Fisher of the Christian Church Mrs. O.H. Park Mrs. T.E. Powers Mrs. A.B. Loranz Mr. Hensleigh John Miller

However, at the first board meeting Mrs. Powers resigned and Miss Mary Berry took her place. Rev. Homan was elected president of the board, Mr. Hensleigh vice-president, Rev. Fisher secretary, and Mrs. Loranz, treasurer. At this meeting the board decided to raise $1,000.00 by subscription and grant membership in the association to any citizen by the payment of one dollar ($1.00) per year, or close to $25.00 per year in today’s dollars. However, the library was to be FREE to all residents of Clarinda, Iowa and the vicinity. After a sum of money was raised, a room was rented in the Brown Building on the east side of the square at the rate of $11.00 per year. Once furnishings were acquired, Mrs. Clara B. Willis was hired as the first librarian at the salary of $12.00 per year, which was soon raised to $30.00 per month ($730.00 per month today). Rev. Homan had to later resign from the board as he was assigned to another pastorate, and Mr. Fred Tomlinson was elected in his place. Mr. Lewis assumed the presidency. The board soon established rules and regulations for the library, such as that no reader was allowed to take out more than one book at a time. This was in part due to the small collection of books that library had as well as the limited budget to purchase new material. The board also established a book committee, made up of board members, whose task was to draw up an initial list of books the library would need. Once the books where acquired and cataloged the library was ready to open. A formal opening was held on Dec. 12, 1905. The library was supported by private gifts and organizations, such as various women’s clubs, for almost two years, until in February 1906 the Library Board of Trustees submitted a petition to the city council requesting that the town assume the maintenance and support of the library. At the spring election, the library proposal was submitted to the public and carried. A tax of two mills was granted for the library, providing it with relatively stable funding.

In 2013 the library greatly expanded the number of online services. The library launched a new website that gets over 2,200 hits per month. The library also added many databases; Zinio for eMagazines; Freegal for downloadable music; Chilton's Automotive Repair; PowerSpeak Languages; and Price-It Antiques and Collectibles. Some of the highlights from 2013 included: allowing text messages about library materials; offering LearningExpress Online; starting and iPad Club that meets monthly and loaning 2 LeapFrog LeapPads for in the library use. Library Director Andrew Hoppmann was selected to be a mentor for the State of Iowa I-Lead a nation wide program. Youth Services Librarian Marissa Gruber was selected as the 2013 Employee of the Year for Clarinda, Iowa. In April the library hosted a teen mystery program which had 35 teens in attendance. IPTV superstar Dan Wardell came to the library in July to kick off the summer reading program. The Lego Club which started in 2012 was still a popular program in 2013. The library also received a grant for a telescope and ipads as well as AWE children's learning computers.

Thanks to Connie Burton, Elaine Butler, Carolyn Scherf, Cathy Hookham’s paper, Linda Warrick, and the others who helped with this history project.

Date listed is year they were appointed to the Board

Memories: 1
Enter a personal reminiscence or story.
Andrew Hoppmann
I enjoyed reading the history of the Clarinda libraries. I remember my excitement as I walked down the stairs to the children's section of the old library in the late 1950's and early 1960's. It was the high point of our weekend when we could come check out books. Libraries are gifts to children and adults. I read with interest Andrew's article about funding. Thank you for everything you do for the library. -Carlene Buck
posted 10 Apr 2009 by Andrew Hoppmann
Login to add a memory.
Images: 33
Lied Public Library - Clarinda, Iowa 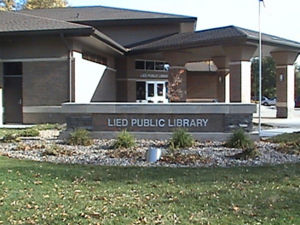 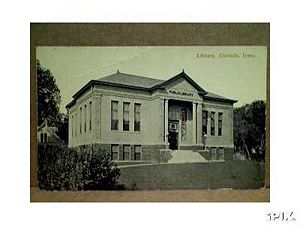 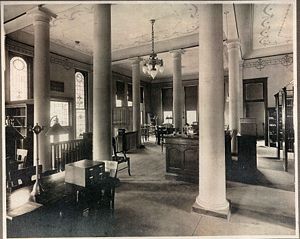 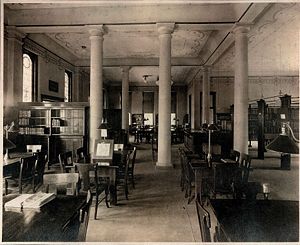 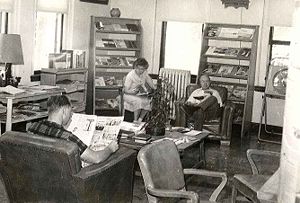