[send private message]
This page has been accessed 435 times.

Long ago, in prehistoric times, Loving county area had many springs with potable (drinkable) water. These supported wildlife and nomadic hunters that wandered through the area. [2]

1867 - Loving County was named for Oliver Loving, ( cattle rancher and pioneer of the cattle drive who, along with Charles Goodnight, developed the Goodnight-Loving Trail.) He was mortally wounded by Comanches while on a cattle drive in 1867 in the this vicinity of the county.
1874 - Loving county was separated from Bexar county and became part of Tom Green County.[3]
1887 - Loving county was created. It was disorganized.
June, 1893, the organizers of the canal company filed a petition with the Reeves County Commissioners Court signed by 150 allegedly qualified voters who requested separate organization for Loving County. The court approved the petition and allowed the organization of the county. A county election was held on July 8, 1893, eighty-three votes were reported, and county organization was approved.[3]

A landowner complained and hired a New York law firm to investigate some improprieties in county government. The law firm discovered the county records were missing - had been taken to Denver.
The organizers fled taking all the county records.

1897 - The state legislature then disincorporated Loving county in 1897, and attached it to Reeves County[3]
1897 - The Texas state legislature deorganized Loving County on May 12, 1897 and reattached to Reeves. The Reeves County Commissioners Court then taxed Loving County landowners to pay off the county debt.'[3]
1921 - Oil was discovered. Now people became interested!! The population increased
1930 - population was 195.
1931 - Loving county was reorganized.
1936 - Red Bluff Dam was built across the Pecos on the Texas-New Mexico boundary for irrigation and recreation. This water is saline, thus cannot be used to drink. [3]
1988 - the county piped drinking water to a 500-gallon tank in Mentone for use by residents.

Loving County and Mentone remained generally undeveloped because the land was mostly held by absentee owners, because good water was scarce, because cattle grazing made the best use of the unimproved land. These owners do not living in the county, but vote in each election, ensuring the tax rate is low[3][4]

Loving County is named for Oliver Loving, a cattle rancher and pioneer of the cattle drive who, along with Charles Goodnight, developed the Goodnight-Loving Trail. [2]

190- census for Loving County was 3 people

Six men from Denver, CO representing the Loving Canal and Irrigation Company of Mentone, Texas came to Loving and possibly had a scheme to defraud landowners. They were going to bring water from the Pecos to Loving county for the farmland.(Poor soil there. 1890 census the county had 3 people. They collected a petition with 150 qualified voters who requested separate organization for Loving County. Review of this, the court approved the petition and held a county election in 1893. County organization was approved. Mentone was laid out by the organizers. Organizers of the irrigation company plus several nonresidents were elected to the county offices.
Soon the organizers of the canal scheme and county officials were gone, as well as the county officials.

According to the New York times article, Mentone has 1 cafe, 1 gas station, 2 roads. It has difficulty seating 12 jurors who are not related to the defendant, the school was closed with 2 students and was costing more than the students. The County jail was moved to Pecos in Reeves county. [4]

Sheriff Billy Burt Hopper ran for office in 2004. [4]After his election he received a letter from a group saying they were Libertarians, who had bought acreage, were going to bring in people, and free the county. He investigated with the Texas rangers, and learned they had an option on some land, but never completed the purchase. He has their names listed on a most Wanted bulletin in his office, if they return to Loving county.[4]

The county has trouble seating 12 jurors who are not related to the defendant. This partly due to Sheriff Hopper who patrols the county in a pickup with two shotguns and an AK-47.[4]He knows the number of Mentone residents (16) and 55 other county residents are spread through the remainder of the county which is salty ground, and has lots of rattlesnakes. There is not much crime due to nothing to steal or damage. [4]

The land in Loving County is flat desert, with a few low hills. Trees, other grass are only desert shrubs, range grass and cacti, with salt cedars along the river. Elevations vary from 2,686 to 3,311 feet above sea level. The Soil is calichified bedrock and wash deposits of pebbles, gravel, and sand, thus not supporting large trees. [3]

On the East of Loving County smallest county in the Permian Basin of West Texas), is Winkler County, on the south by Ward County, on the west by the Pecos River and Reeves County, and on the north by Eddy and Lea counties, New Mexico. The center of the county lies at 31°50' north latitude and 103°35' west longitude.[3]

Only after a heavy rainfall - does the poor drainage system consisting of playas and dry draws that feed into the Pecos. The rain is 10 inches per year. [3]

Loving county had first elected female sheriff in Texas, Edna Reed Clayton Dewees. Dewees was appointed to the job in January 1945, She won an election to continue in the office through 1947. This sheriff never carried a firearm, and reported only two (2) arrests during her entire term. Later she would became the county district clerk, from 1965 to 1986

1874 it was separated from Bexar District, becoming a part of Tom Green County.

There are not many cemeteries in Loving county. 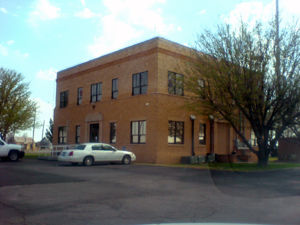