Date: 1942 to 1946
Location: US and European Theater of Operations in World War II

[send private message]
This page has been accessed 231 times.

In January, 1942, Henry joined the California State Guard and served as a sergeant. He had wanted to be a pilot in the war effort, and went down to the recruiting office in Los Angeles at the same time as actor Jackie Coogan. They were interested in 18-22 year olds with at least one year of college, both Henry (age 32) and Coogan were too old, and were turned down. He later returned to enquire about an ad regarding glider pilot training, and ended up being sworn in. His enlistment serial number was #19091371, starting as a Pfc. In July, 1942, he went to March Field in Riverside, CA, for his initial intake. In august, 1942, he was assigned to Fort MacArthur in san Pedro, CA where uniforms were issued, physical exams and vaccinations performed. Then Henry took the ‘Red car’ back to March Field, where he was classified as a refrigeration engineer. From there to Twentynine Palms, CA for primary flight training in single seat Taylorcraft airplanes without engines to simulate gliders. He had three different tow pilots in three months and ended up being promoted to staff sergeant. Next, from November to December, 1942, he was transferred to Fort Sumner, New Mexico (the base was just being built) where he was classified as a welder. Next to Big Springs, Texas, near Amarillo, from January to March, 1943 for intensive flying in Piper Cubs and Taylorcraft (Henry was the first night-flying trainee). From there from March to May, 1943 to George Air Base in Victorville, California, where he became a flight instructor on real cargo gliders, and became a flight officer (#T-587 rank). From there to Bowman Field in Louisville, Kentucky from June to July, 1943 for more day and night flying and landing. Next, in August to September, 1943, he went to Fort Mackall in North Carolina for combat training, which consisted of flying with paratroops on board the glider. [Anecdote: Henry witnessed fatal accidents involving paratroops and gliders during this phase of training.] Then in October, 1943, he went to Alliance, Nebraska, where he was assigned to his group and squadron: 94th Troop Carrier Squadron, 439th Troop Carrier Group [Note: 4 squadrons = 1 group. Every squadron had 12 planes + 12 gliders, but Henry never had more than 11 planes in his squadron. He sold his 1932 Ford in Nebraska.] Next, in November and December of 1943, he went to Pope Field, Fort Bragg, North Carolina, which was a staging area where they kept flying practice. [Anecdote: Henry had an accident in which, due to his tow rope being incorrectly placed, his glider cut loose over pine forest. He and his co-pilot escaped with minor injuries. The next day, an OSS interrogation required them to find the tow rope.] He was back on leave to Los Angeles over Christmas (hitched a ride with a Major Evans in a C-47).

In January, 1944, he was assigned to New York City, where his unit boarded a troop ship (an ex-German ocean liner) called the SS George Washington which left in a convoy bound for Liverpool. At Liverpool, they were transferred by train to Upottery near Taunton, from February, 1944 until past D-Day (June 6, 1944). On D-Day, Henry was assigned to the second wave of gliders. They never flew during the invasion, but were retained for later. On June 15, 1944, Henry was assigned to take heavy equipment (ground) for a whole battle group across the English Channel in a Landing Ship tank (LST). They landed on Omaha Beach, after the action. [Anecdote: The first night Henry slept on a tractor, and the next morning discovered that overnight, he had lost two of his men, who had gotten Calvados liquor from a local farmer that was apparently poisonous, and they died.] The 94th TC was assigned to base at Chateau Dun, Normandy, where they remained during July and August of 1944, and Henry was made a second lieutenant via field commission while there. After this, Henry and two squadrons were redeployed via Marrakech, Morocco, to Orbitello, Italy (They were low on gas and just made it to Marrakech). In Orbitello, 50 miles north of Rome, they were there to mount an invasion into southern France, to be called Operation Dragoon. On august 15, 1944, they landed in Argens Valley, Lamotte, France (Champagne region). This was a diversionary action. There was a tactical error with a release of gliders. In Henry’s glider there were 14 Japanese-American soldiers and one Caucasian officer (They were a chemical warfare unit), with one large mortar plus four shells with chemical weapons. They got out in a C-47 bound for Corsica, then back to Orbitello. Around September 1, 1944, they returned to Chateau Dun to prepare for Operation Market Garden. From September 17 to 30, 1944, some 2596 gliders (697 British Horsas and 1899 US CG4A Wacos) started in Beck, Holland, with glider pilots and airborne infantry looking for an entrance over the Rhine, which would be the first Allied (combined British and American) ground penetration into Germany. Incidents during Market Garden: In the transition from Chateau dun to the Channel to Beck, Lt. Col. Joseph Black was Henry’s CO. Black got a leg shot off when an ammunition ship exploded under his plane. Henry Wolf, an American Jew who spoke German, was Henry’s passenger on his glider, Wolf was to function as an interrogator. Henry was involved in a shoot out on a German base, took surrender of 300 Germans from a bombed out train, the last of whom was an SS Major. Wolf made him dig his “grave” in order to intimidate him into providing them passports and ID. On Sept. 17-18, 1944, a British Army unit encountered four German armored Panzer divisions at Arnhem, at the fifth bridge. Henry and other troops in his unit lived in foxholes for ten days or more, they were surrounded, continuously exposed to the sound of “screaming meemies”, lived on C rations and rain water, eventually additional supplies were parachuted in. On Sept. 28, US Army trucks (with Black drivers) drove in, picked them up, and returned them to the Rhine, a distance of about 20 miles. The Remagen Bridge, the third bridge, wasn’t blown up, it formed an Allied bridgehead. On Sept. 30, Henry’s unit was back at Chateau Dun, where they stayed until Christmas. [Anecdote: they had an “upside down Christmas tree”.] On December 24, Henry had to work all night loading armor. They had not put his name on the list for duty over Bastogne, considered to be a “milk run”, so he didn’t go. Two weeks later, only one pilot had returned out of eleven. Henry’s unit was idle after the Battle of the Bulge until March 24, 1945, when he was involved with a “twin tow” (short tow + long tow on same tow plane) to Wesel as part of the final invasion sequence in Germany. Henry had become part of the 93rd TCC Group by special request of the commander. Henry was on the “long tow” with the commander’s jeep accompanying the commander’s gun on the “short tow”. Henry’s glider had come to a stop on the ground (His co-pilot was a power pilot). They smashed their way out with their guns. Henry took aim and fired into the flashes of light that firing was coming at them from, and it stopped. Later he saw a teenage boy, dead, who may likely have been their assailant. They encountered a fellow glider pilot who had been badly injured (cut open in front), whom they dusted with Sulfa powder. Henry was later awarded the Bronze Star for his actions at Wesel. In April, 1945, Henry was involved in flying C-47s in humanitarian missions, moving supplies to hospitals and displaced persons, including concentration camp internees, to Belgium and France. After V-E Day, they returned to Britain, for transportation back to the US. Henry became a First Lieutenant at this time. They were all told that they were going to be re-organized and sent to fight in the Japanese theater of operations, but then the atomic bombs were dropped on Hiroshima and Nagasaki, and all had a tremendous sense of relief. Henry flew back to the US in a B-24. 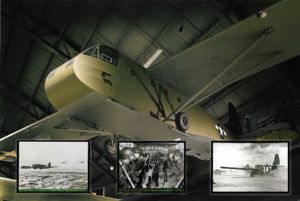 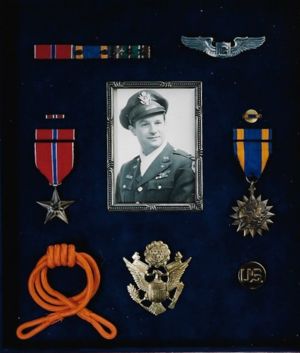