[send private message]
This page has been accessed 154 times.

The hammer in Maråker was privileged in 1730 and closed in 1876. Some of the initial hammersmiths, charcoal makers and general foundry workers came from nearby Ljusne foundry.

The cathechism examination record for Söderala 1747-1757 was used as a starting point for this page. It is probably best to re-work it to form family groups, since the purpose is to explore the families that remained in Maråker for several generations and their intermarriages. The interest was sparked by Karin Olofsdotter Skägg (1790-1859) (Tree), who seems to descend from most of the families.

The charcoal makers lived in settlements out in the woods: Dymmelmo, Storberget, Mar

Hammersmith Erik Andersson Skägg was born and raised at the hammer in Sunnäs, and moved to Maråker with his family. They must have been one of the first smith families in Maråker and there was one hammersmith by name Skägg in Maråker for five generations, until the male line went out.

Hammersmiths Lars Jansson Björn (1682-1758) and Olof Jansson Björn (1700-1799) were brothers, sons of Jan Larsson (≈1665-1712), who was a hammersmith in Skog and Söderala. There were several generations Björn - descendants of the elder brother- working as smiths in Maråker and many daughters who married smiths or charcoal makers.

Lars Andersson Syhl (1711-1773) came to Maråker as hammersmith master in 1748.
He had three surviving children - the ones listed in the household record 1747-1757
Descendants (very incomplete)

This family is not (yet) in WikiTree)

Lars Larsson came from Trönö parish. He married in Söderala in 1734, when working in Maråker.
Descendants 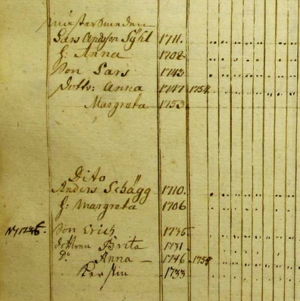