[send private message]
This page has been accessed 1,111 times.

Mariental (Tonkoschurovka), (Мариенталь),
a German Roman Catholic colony, was established on the Öst "Wiesenseite" or east "meadow side" of the Volga River on the 7th of June 1767. The colony was founded on 16 June 1766 by LeRoy & Pictet.

Mariental is German for "Mary's Valley." The colony of Mariental was located in the district of Saratov, 50 versts (each being two-thirds of a mile) from the city, on the meadowside (weisenseite) of the Volga river. It lies near the Bollshoi Karaman River, and along the Orenburg summer road, which was used by the villagers to drive their livestock to market. The land allocated to Mariental, was bordered on one side by the Colony of Herzog (Susly), one side by Graf (Krutoyarovka), one side by Louis (Ostrogovka), and on the fourth side by vacant crown land. Because they lacked enough pasture land within their borders, they had to share vacated crown land with the other colonies.

The tradesmen learning how to be farmers had struggles beyond imagination. The tall grass had never seen a plow and was almost impenetrable. Even the knowledgeable farmers had difficulties with the grasslands and the crude implements they had to work with. Their fields were out beyond the village, sometimes quite a distance. They were told how many acres to plow, when and what to plant, and when to harvest, even needing permission to sell livestock.

An even greater menace to them were the nomad tribes of Kirghiz and Kalmucks. Sometimes whole villages were in ruins, and many murdered or kidnapped and carried off to the slave markets in the East. From MARIENTAL alone, two or three hundred villagers were carried off into slavery. Some 150 colonists from KATHARINENSTADT set off in pursuit, hoping to free the captives, but were themselves captured, tortured, and killed. In September, 1774, a large force of 600 men, under Russian officers, followed the Kirghiz, and managed to liberate 800 or more of the captured colonists. Some of the others were later ransomed back, yet others were not heard from again. Guards had to be on watch night and day in the villages, and weapons were carried along to the fields for protection.

There were four different churches built in Mariental, each one larger than the last because of the increasing number of colonists living there. Early settlers worshiped in their homes. The first church building was constructed of oak and fir timbers and was consecrated "Maria Himmelfahrt" in honor of the Assumption of the Virgin Mary.

Construction of a brick church began in 1830 under the direction of master-builder Ivan Minevich from Saratov. It was 51 meters long, 20 meters wide, with eaves 15 meters high and designed in the neo-classical (Kontor) style. It was consecrated in November 1834, however it was not until 1842 that all the interior and exterior details were completed. The bell tower was 32-meters tall.

In 1860, a vestry structure was added to the church which made it possible to move the altar back into the Apse. 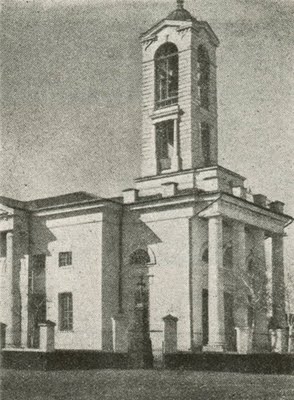 String and mandolin orchestra of Mariental 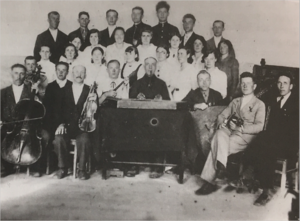 Evelina Staub
In case anyone is interested, here is a little film by Martin Wagner, recorded in Mariental in 1924: https://www.youtube.com/watch?v=CqVcL3QBs1A&list=WL&index=35&t=0s
posted Aug 01, 2020 by Evelina Staub